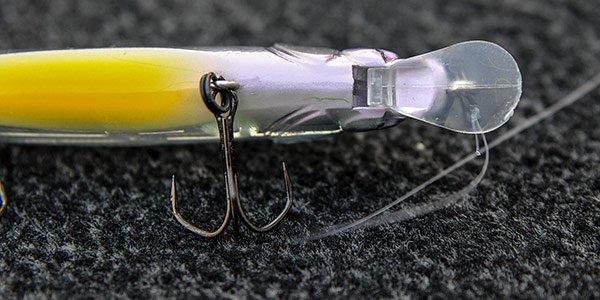 The seasons change and the bass fishing patterns change with it. Deep diving crankbaits get replaced with pulsing spinnerbaits and dodging topwaters as bass start their fall foraging of shad.  But one technique that is often associated with much colder water is a twitching a jerkbait. This time of year a jerkbait can really put bass in the boat because the bass get a little funny acting. The tempting nature of a jerkbait is often enough to trigger a reaction strike even when bass might not necessarily feel like eating, having already gorged themselves on an overabundance of bait.

We started pulling out our jerkbaits in the last couple of weeks and tied on a new bait from Megabass called the Ito Vision 110 FX Tour Premium. This new jerkbait to the Ito Vision line features an interesting new attribute that will make it a big winner come coldwater jerkbait season.

One thing about fishing in the fall is you’re likely to be marred with more wind and weather changes. While fishing in the wind can be a great time to try a jerkbait, throwing one in the wind becomes less entertaining. Your bait catches the wind and helicopters uncontrollably, and a long post-pattern pass lands way short of your touchdown cast.

Today’s jerkbaits have much better weight-transfer systems than in years past to combat the casting issues with early jerkbaits, and the Megabass Ito Vision 110 family of jerkbaits have some of the best. But all jerkbaits will helicopter in heavy wind because the lip of the jerkbait acts as a huge rudder that catches the wind against a pencil thin bait. The turbulence caused by the wind sliding down the bait and being interrupted by the lip causes the bait to spin out of control and kills your distance. That was until the new FX jerkbait hits the shelves.

The new Ito Vision 110 FX Tour Premium features a folding lip. The patent pending Variable Resistance Flap Bill is on a hinge. When it hits the water the lip drops into place and the force of water against the face of the lip cause it to jerk and rip like the other 110s, maybe even a little better. But when you rear back to cast, the lip folds up on the bait making it a streamlined dart. Couple that with the weight-transfer system,  and anglers get more distance on their jerkbait which will allow them to cover more water, which is a huge overlooked factor in jerkbait fishing. 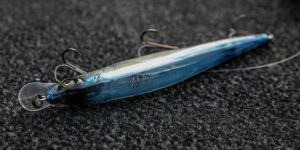 The Ito Vision FX 110 features the same great neutral buoyancy and liveliness as its other 110 models. However we felt like this bait actually ducked and darted a little better on a slack line jerk. The lip must be moving in the water because the bait just seemed really lively to us while testing. We’ve caught a few bass already on the new jerkbait. The added distance is nice for making long casts, staying off the bass, and covering a lot of water.

With warmer water temperatures, we’ve worked the bait fast on some flats and points where some bass have been foraging. The bait casts well, darts well and suspends well. On 12-pound fluoro, we’ve gotten some really long casts with the jerkbait. The bait is real responsive so we were pleasantly surprised to see the hinged lip didn’t hurt the action but rather seems to have made it better. And it seems very durable. So we’re not worried about the lip breaking after prolonged use. In fact, the fact that it’s not locked in position makes it less susceptible to breaking like we’ve seen with other jerkbait lips.

The baits are available already at Tacklewarehouse.com. We really like the Pro Blue 2, GP Elegy Bone and Blueback Oikawa as well as several other colors. The Megabass Ito Vision has become a staple among the pro tours when a jerkbait bite is on in cold water, and this one will reserve a future spot in anglers’ tackle boxes. To see more about these jerkbaits and other new Megabass lures, visit MegabassUSA.com. 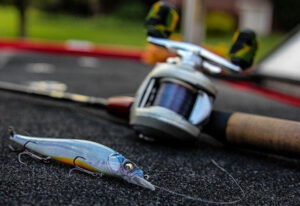