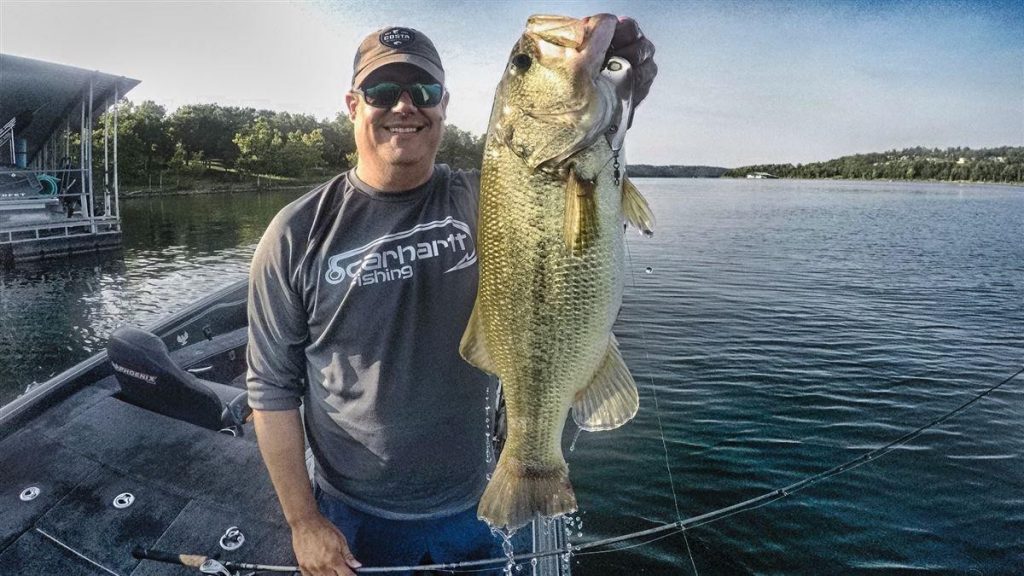 Flutter spoons are not new to bass fishing but most anglers are only using the bigger ones to catch bass on the bottom on deep offshore ledges. They can also be terrific for catching suspended bass in open water as well as bass relating to shade in standing timber and under floating docks on deep highland reservoirs.

Jason Sealock spent some time on Table Rock a few weeks ago and caught a bunch of spotted bass, largemouth bass and smallmouth bass on the new River2Sea WorldWide Spoon. He caught some fish to 6-pounds and had some really good limits in near 100 degree temperatures in the middle of summer doldrums.

His key was using flutter spoons to target bass in the 30-foot zone. In this video he discusses how he fishes a flutter spoon, how he keeps track of his bait’s depth when fishing for suspended fish and offers tips to make it easier to fish for suspended fish while showing how he enjoyed a fun week chasing suspended bass on this clearwater impoundment.

The River2sea Worldwide Spoon was designed specifically to fish for suspended bass around docks by professional angler James Watson. Watson has perfected the technique and his new spoon is made to carry and glide to get it way under docks, which makes it a bit more versatile than some other flutter spoons. Learning to identify the depth the bait and bass seem to be holding will help you be more quick and effective working the spoon up and down through the primary feeding zone. Docks and deep standing timber can offer additional shade that concentrates small groups of bass.

Finding productive docks and areas require a lot of pitches and hops with the flutter spoon. So you want to be able to run a bunch of places, drop the spoon, hop it a few times and reel it up fast. Then you will pitch the flutter spoon to the next spot, repeat and go.

Jason uses a high speed Baitcaster and has really come to like the Lew’s Mark Rose swimbait rod in the Custom Pro series for pitching a 5-inch flutter spoon like the River2Sea James Watson WorldWide Spoon. It’s 5-inch and weighs 1-ounce with a custom stinger hook that hooks and holds fish very well on the big spoon.