Admittedly, it was pretty intoxicating – the smell of sunscreen, the salty taste of sweat breaching my lips, the belligerent rumble of distant storm heads and that sound; the ting, ting, ting, ting, ting, zzzing of a slipping drag erupting into the full-on sizzle of a brutish redfish imposing its will on your feeble efforts to control such fury.

Redfish are an amazing gamefish with a wide range along our south and east coasts that anglers can exploit for fishing adventures of their own.

During the recent Buras Marsh Media Bash out of Cajun Fishing Adventures big “bull” redfish were in no short supply, while sporty marsh reds of beautifully deep copper hues offered tons of fun amid the Roseau cane and spartina grass.

A true bucket-lister, the Mississippi Delta’s abundance and diversity in Louisiana reigns supreme over the redfish range. Other hotspots offer better sight fishing, while some boast different habitats like lush sea grass beds. But in terms of vast habitat, plentiful fish-fattening forage and relatively low fishing pressure due to sparse population, this is something every redfish angler must experience.

I’ve made over a half dozen Delta fishing trips and each time I cross the Greater New Orleans Bridge to the West Bank and head south on La. 23, I remember an 8-year-old boy’s eye-widening glee at that first glimpse of Walt Disney World’s entrance.

It’s not just the fish – it’s the cool places in which we catch them.

On the second day off our trip, Capt. Ross Montet guided Live Target’s Gary Abernathy and me to an arm-stretching morning of bulls up to 38 inches before slipping into a grass-filtered marsh pond where reds look like new pennies in the clean water.

The next day, Mustad’s Reid McKinstry and I joined Capt. C.A. Richardson, who drove us from the lodge up 23 to the Point-a-la-Hache ferry. Crossing the Mississippi River and launching into the East Delta saved a long, rough ride in Richardson’s Hell’s Bay skiff. With westerly winds, we sight fished reds in leeward ponds in the Black Bay area.

Such are the Delta delights that keep us coming back for more. 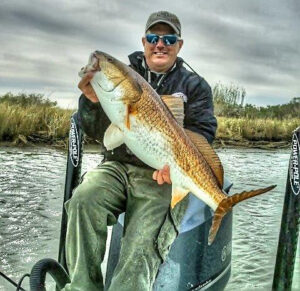 No doubt, if you want boundless redfish action, southeastern Louisiana is tough to beat. No matter which way the wind blows, you can always find fishable waters and with simply astounding numbers of fish, liberal daily bag limits (5 per person) make for dandy fish dinners.

In addition to the central Delta wonderland of Buras-Empire, the Delacroix/Hopedale area on the northeast side is worth a visit, as is the Delta’s southern Terminus, Venice.

It all looks fishy and to newcomers, it may all appear homogenous; however, there are significant differences. On the Delta, levees constrain the river all the way down to Venice where it greets the Gulf the Head of Passes (Southwest, South and Pass-a-Loutre). Generally, the lower you fish on the Delta, the greater the seasonal freshwater influence.

“Because of the Mississippi River and its influence, salinity levels change constantly throughout the year,” said Ray Stansbury of Cajun Fishing Adventures. “The first half of each year, the river is high, which lowers the salinity. Once the river drops, saltwater intrudes into the marshes and even the river, raising the salinity levels.”

Capt. Anthony Randazzo, who runs Paradise Plus Lodge in Venice adds this: “The lack of (river) influence promotes higher salinities and a wider proliferation of oyster beds.  These oysters are the primary structure (in areas where) much of the land has subsided (due to coastal erosion).

“On the other hand, Venice is a dynamic environment with constantly changing salinities. Most of the year, the salinities are very low. Given the lower salinities, the presence of oysters is minimal. Shorelines covered with Roseau cane and varieties of other vegetation are the primary habitats.”

Over oyster beds and along Roseau cane and spartina grass edges, jigs with soft plastic minnow tails work well for casting and suspended beneath popping corks. When the bulls gather in open water, topwaters like the Live Target Mullet can deliver some of the most incredible strikes you’ll ever witness. In areas of denser vegetation, spinnerbaits, gold spoons and weedless soft plastic jerkbaits are your best bets.

West of the Mississippi Delta, expansive redfish habitat extends to the Sabine River marsh at the Texas Border. For a rich dose of culture and fantastic fishing, follow La. 1 along historic Bayou LaFourche to Golden Meadow, where a network of canals and drains cut through a purely saltwater habitat of low grasses and oyster banks.

Outer Banks: Late summer-fall sees waves of giant bulls following menhaden schools down the beaches. When the bite’s on, favorites like Avon, Buxton and Cape Hatteras find anglers with waders and long rods lining the surf for their shot at passing fish. Most uses heavy rigs and cut menhaden or live finger mullet. Contact: http://www.reddrumtackle.com 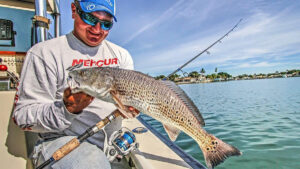 Jekyll Island Marsh: One of the Peach State’s heralded Golden Isles; Jekyll sits just off the Glynn County’s Brunswick mainland separated by a majestic band of spartina marsh that inspired Georgia’s poet laureate Sidney Lanier to pen his famous work, The Marshes of Glynn. This area also holds loads of slot sized redfish that tend to stack up each spring when the new crop of menhaden and shrimp fall out of the marsh drains. Contact: Capt. Greg Hildreth (http://georgiacharterfishing.com/)

Charlotte Harbor: Fed by the Peace and Myakka rivers and flushed by tidal activity through Boca Grande Pass, this major estuary finds reds feeding amid lush grass beds in areas like Bull and Turtle bays northeast of the pass. And when the mullet gather in huge numbers for fall spawning, reds mingle with these vegetarians to pick off the crabs and shrimp they displace. Contact: Van Hubbard (http://www.captvan.com).

South Tampa Bay: Heavy fishing pressure keeps the fish edgy, but slipping out on an uncrowded weekday offers tremendous potential if you track down one of the big schools that historically graze certain deeper grass flats in the spring and fall. Contact: Capt. Rob Gorta (https://www.facebook.com/robert.gorta).

Homosassa-Crystal River: Rocks, rocks and more rocks – the “Nature Coast” presents a navigational nightmare for those who drift outside marked channels. But easing along by push pole or trolling motor affords numerous opportunities for casting light jigs and gold spoons to reds that feed along the rocky outcroppings. Contact: Capt. William Toney (http://homosassainshorefishing.com/).

Dixie Bar: Located just off the Fort Morgan Beach on the east side of Mobile Bay, this is a well-known bull red spot. Drifting natural baits with the tide is the way to go. Contact: Barnie White (http://www.whitefishingteam.com/index.html).

Wherever you look for redfish, you can expect a few general behavior points. The fish will move up to shorelines, grass flats, oyster bars and shallow rocks with the rising tides and retreat to adjacent troughs and channels with the outgoing cycle. When grazing shallow areas, reds like to feed into the current so forage comes to them.

Also know that, while reds ascribe to the safety-in-numbers thing, schooling also has its liabilities. If one fish gooses another one, two more will assume the sky’s falling and before you know it, the chain reaction of unfounded assumption will send everyone running for safety.

Bottom line, go easy on the approach. Sneak into casting range, minimize the movements and do your best to quickly separate a hooked fish from the group – otherwise he’ll rat you out and then it’s all over