There’s nothing quite like fishing with frogs—seeing the wake approach the lure, watching the water’s surface explode and wrenching a huge bass from the slop is something all avid anglers dream of. Fortunately, topwater frogs are some of the most versatile baits in our bass fishing arsenal. Effective in water temperatures ranging anywhere from 50 to 90 degrees, it’s a proven technique that catches some of the biggest, meanest bass of the year.

Although bass fishing can be tough in the heat of the summer, heavy cover frogging in shallow water is a great way to beat the summertime bass blues.

SPRO pro Dean Rojas is renowned for his frog fishing prowess and has a lot of success targeting shallow, heavy cover in the summer with his SPRO Bronzeye Poppin’ Frog and Bronzeye Frog 65. While many anglers flock to offshore structure and cover for summertime bass, he prefers getting as shallow as possible to target really big bass.

“When I’m faced with really hot temperatures, I’ll pound that frog into the thickest cover I can find,” Rojas said. “Believe it or not, this technique is actually most effective on very bright, sunny days.”

Clear skies aren’t what many anglers think of when it comes to suitable topwater fishing weather, but his approach makes a lot of sense. In bright conditions, bass often tuck very tightly into cover. Because they are ambush feeders, they rely heavily on stealth when looking for meals. When high skies increase underwater visibility, bass become exposed and are forced to find heavy cover—such as grass, wood and docks—to hide in.

Any shallow water technique summertime technique is sure to raise some eyebrows, but again, it makes sense from a biological standpoint. Most fisheries tend to get a lot of afternoon thunderstorms throughout the summer and the fresh runoff increases shallow water oxygen levels. Although most fish will remain in their deep water dwellings, you’d be surprised by how many big bass will revert back to shallow water in search of more suitable water conditions.

Topwater frogs can definitely be effective for covering water, but Rojas catches his biggest fish when target casting with the Bronzeye Frogs. Instead of fishing big, expansive areas with it, he’ll target very precise pieces of cover.

“I always try to get the bait into small areas of thick cover,” Rojas said. “Normally, I’ll cover a diameter of about 2 to 5 feet as opposed to large areas. It’s all about high-percentage areas when it comes to topwater frogs.”

Rojas spends a lot of time looking for shallow, thick cover with deep water nearby—just a small, 1 to 2-foot drop adjacent to the cover is often all it takes to find monster bass. Adjacent deep water is an appealing characteristic to a bass because it allows them to slide back into deeper depths when they’re inactive and easily move into the shallows to feed.

“If I can find an area with deep water close to heavy, shallow cover, it always boosts my confidence,” Rojas said. “When big bass are ready to feed, they’ll quickly move into the shallow water and they’re usually not too hard to catch.”

Cast for cruisers on the edge of heavy cover

It’s not uncommon to see summertime bass roaming the shallows, and Rojas has a trick to catching these finicky fish. If he’s targeting heavy cover and notices a big bass cruising on the edge of the cover, he never hesitates to throw a frog at them.

“If you can see a bass roaming near heavy cover, they’ll definitely bite the frog,” Rojas said. “The Bronzeye Frogs are designed to grab ahold of big fish and not let go, so I know if they bite, I’m going to get them in the boat.”

To properly present his frog to wary cruisers, Rojas stresses the importance of “leading” the fish. Many anglers make the mistake of casting too close to the fish, but he makes sure to give them a lot of space to avoid spooking them.

“It’s important to cast about 10 feet ahead of cruisers,” Rojas said. “I’ll start with a more aggressive walking cadence to draw their attention and slow it down a bit once the bass starts approaching. You can watch their reaction to the bait and know if they’re going to eat it. If they start swimming toward the frog, they’ll eat it 9 times out of 10.” 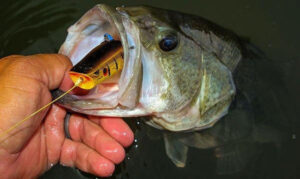 When you see Rojas practicing for a tournament with one of his SPRO frogs, you’ll notice one thing about all else—speed. In order to quickly eliminate water, he maximizes his efficiency with rapid, downward twitches of his rod tip.

“You never want to catch a bunch of your good fish before the tournament even starts,” Rojas said. “To avoid doing so, I fish the frog very quickly to decrease the chances of a hookup. All you need is for the bass to show themselves during practice.”

When it’s tournament time, however, and it’s all on the line, you’ll notice Rojas taking a much more thorough, slow approach. Following a long cast into heavy cover, he’ll twitch the rod downward and immediately give the bait some slack to achieve his famous walking action. This technique is especially effective in heavy cover as it allows the frog to stay in the most productive strike zones longer.

The art of the frog hookset is widely misunderstood, according to Rojas. While many anglers, including myself, tend to wait a few seconds after the blowup before setting the hook, Rojas hits them fast and hard.

“If I can see a bass take my frog, I always set the hook as soon as I possibly can,” Rojas said. “So many times when you see the splash, they’ll miss it—but if they’re on it, they’re going to choke it. It honestly doesn’t matter whether you wait or not. They’re either going to choke it or miss it entirely in my experience.”

When fishing topwater frogs in heavy cover, Rojas exclusively uses 80-pound Sunline FX2 Braided Line. It may seem like overkill to some, but he’s a big believer in stout fishing line.

“80-pound Sunline FX2 Braided Line actually has the same diameter as 65-pound test,” Rojas said. “It casts like a rocket, stays on the spool well and allows me to hit them as hard as I possibly can and drag them through the nastiest cover. Regardless of where you’re fishing or how big the fish is, it won’t break.”

Although it may surprise some, he actually prefers a 7-foot, medium-heavy rod. While many anglers opt for big, heavy-action flipping rods, Rojas has found many benefits to using a lighter rod.

“Since I’m usually more of a target caster with a frog, a softer tip increases my casting accuracy tenfold,” Rojas said. “It makes it much easier to skip underneath cover and make a quiet entry into the water. A medium-heavy rod also gives the frog a much better action—you’d be really surprised if you try it.”

If offshore fishing isn’t your thing, don’t worry. This summer, stick to your strengths and head for the thick stuff to catch some big summertime bass. If you can locate the right areas and practice your mechanics, you just might turn into a frog fishing addict.