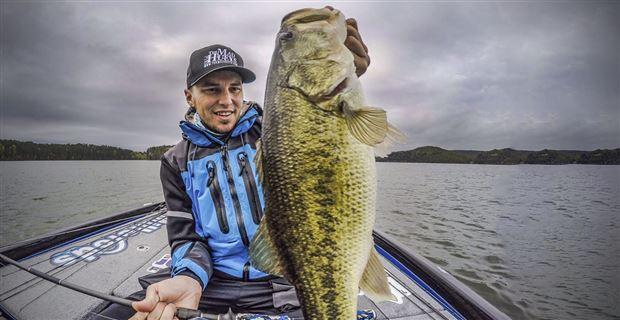 How many times can you recall leaving an area while bass fishing with full confidence that you had caught every fish from that spot? If you are anything like me, the answer is almost never. You may have stopped getting bites in a given area, but that seldom means you caught every single bass from that location.

Maximizing as many bites as possible from an area or spot while bass fishing is something that we all wish we could do better. This is something that professional tournament anglers must have down to a science if they hope to compete at the highest level.

Which is why I jumped at the opportunity to pick Bassmaster Elite Series angler Carl Jocumsen’s brain on the topic of catching more bass from productive areas.

Jocumsen had to learn the ways of largemouth, smallmouth, and spotted bass quickly as he successfully became the first-ever Australian angler to qualify for the Bassmaster Elite Series. He did so by employing a plethora of tactics and techniques, but perhaps none more important than understanding how and when to stay in an area to get more bites.

Jocumsen looks for several different cues to determine if a specific location can produce size and numbers of fish in a multi-day tournament. But when he is looking for an area he believes to be worthy of “milking,” he is ideally looking for an area to which the fish are coming.

Whether it is the spring transitional period or during the dog days of summer, Jocumsen wants to feel as though fresh fish are coming to him before he will dedicate the time to the area. That might mean leaving prespawn banks and going to spawning flats. It might mean leaving spawning flats and going to post spawn staging areas. It may meaning from deep post spawn spots to shallower areas with moer oxygen later in the summer. It may mean the backs of creeks in the fall as shad migrate to the back. He’s always looking for where the bass are and where they are headed.

With productivity determined, Jocumsen has a three-pronged approach to maximizing more bites from bass that includes the following:

As obvious as it sounds, Jocumsen preaches slowing your general speed down to get extra bites from a given area or spot.  All too often as anglers, we simply cruise through an area with the trolling motor on high and expect immediate bites. When we aren’t rewarded immediately, we are gone, off looking for greener pastures. Oftentimes, we may be committing the cardinal sin of leaving fish to find fish.

“The number one thing for me when trying to maximize bites in an area is slowing down,” Jocumsen said. “Once I believe there is a good concentration of fish in an area, I am going take my foot off the trolling motor to try and learn absolutely everything about the spot that I can.”

Instead of making 20 casts in an area and giving up if you aren’t immediately rewarded, slow down. Turn the trolling motor down, slow your presentation down, and ease into the area. Give the fish the opportunity to show themselves. 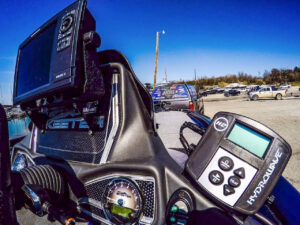 The second step in Jocumsen’s formula to get more bites out of an area is to think more about sound. Believe it or not, our bass boats with their sonar pings, trolling motor noises and our own audible commotion can actually be quite noisy to the fish underwater. If you are trying to sit on a specific spot or area for an extended period of time, eventually the bass are going to hear you.

During Jocumsen’s first few years in the United States, he spent a lot of time fishing and observing bass in the gin-clear waters of Lake Havusa. It was during these years that he began to notice the importance of sound, and just how critical it can be to get a bass to bite.

“I could watch smallmouth and largemouth bass in the shallows and see natural movements, with their pectoral fins moving and them happily moving about,” Jocumsen said. “If I casted my lure within 5 or 10 feet of these fish, they would dart over and eat it. But as soon as I touched my trolling motor or spoke too loud, they would freeze up like statues, and become almost impossible to make bite.”

Jocumsen began experimenting with different methods to try and remain unnoticed by the bass in the waters of Lake Havusa.

“Watching these fish is when I first began to notice the effectiveness of my HydroWave,” Jocumsen said. “When I had the HydroWave running, it almost blocked my unnatural presence and sounds that my boat was making. Making the fish more comfortable and literally giving me a sort of camouflage to the fish.”

Jocumsen uses this added advantage from his HydroWave to the fullest extent when milking an area for more bites. On top of exciting the baitfish in the area, which in turn makes the bass more likely to feed, he knows the sound cloak the Hyrdrowave provides will get him a few extra bites throughout the day.

When trying to get more bites from a specific spot, Jocumsen will turn his sonar units off and run his Hydrowaves on 120-second delay at the loudest volume possible. He runs the delay so the fish don’t get used to hearing the sounds the Hydrowave is emitting. Jocumsen believes in the Hydrowave’s effectiveness so much, he runs two units on his boat, one on his trolling motor and one on the transom.

We all have heard that “big baits catch big bass”, and while this is often true, sometimes you need to mix up the size and shape of your profile when targeting a group of fish in one specific area.

“From my experience, the biggest fish in an area are going to be most aggressive first thing in the morning,” Jocumsen said. “So when I pull up to an area, I will show them my biggest and heaviest profile bait.

“Whether that is a big, heavy Pepper Custom Jig or a Huddleston swimbait, I’m going to feed them something large to try and excite a big one into biting right away. From there, I’ll downsize to a smaller, more finesse type lure to pick up a couple more bites. Something like drop-shotting a Roboworm instead of a big bulky jig, or showing them a more subtle Keitech Swimbait.”

Jocumsen makes the point to simply show the fish something different. If you believe there are more fish in an area, but they won’t bite what you have been feeding them, don’t give up and leave. Change bait size, color, weight or profile, and you can continue to catch bass.

This concept is applicable whether you are fishing a Texas rig, spinnerbait, crankbait, or any other lure. Next time your bite slows, rig up a smaller, more finesse style of lure and make another pass through your area. You might be surprised at what you can catch behind yourself!

Jocumsen also believes in using the lightest line he can get away with when targeting spot-specific bass. He believes the fish can sense the fishing line, and the longer you fish for them, the more they will know that something is not right, and the less bites you’ll get.

He’ll start with 16-pound Gamma Fluorocarbon on his jig rod, but will drop down to 14 or even 12-pound line if he isn’t getting bit.  If he starts with 8-pound fluorocarbon on his drop shot set-up, Jocumsen will show them 6-pound test if he notices the number of bites decreasing.

Finding an area that is holding several bass is usually the difficult part, while catching them is supposed to be the easy and fun part. Problems arise because we as anglers have the tendency to get stubborn when fishing for bass on a specific spot. Especially if we already have history in an area or a spot (i.e. you have caught bass there before on a specific presentation).

Just because they won’t bite your trusty old jig or crankbait doesn’t always mean the fish have packed their bags and left. Sometimes the bass just get conditioned to your boat and your baits. These tips have worked for Jocumsen all over the country and beyond and they can certainly work for you.