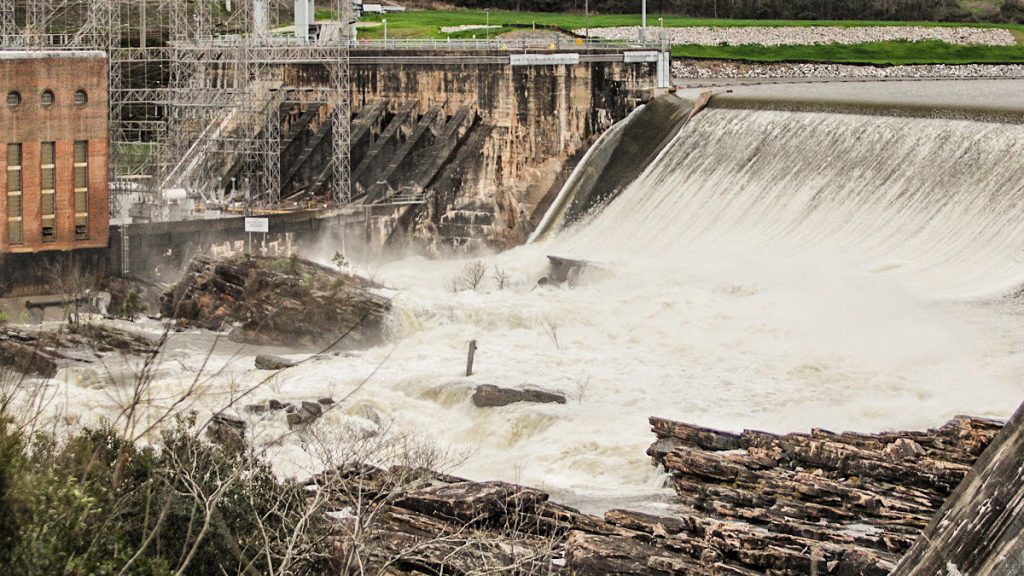 We have seen deluge after deluge this winter across much of the country; the type of rainfall that made Noah look like a smart man after all and had Forrest Gump ready to get the heck out of Vietnam and back to SWEET HOME ALABAMA. But Forrest wouldn’t have likely been able to tell the difference in the two locales here lately, other than fewer things jumping up and biting him in the butt.

With all of the crazy rain many of our readers have been experiencing, we all decided to put together a comprehensive piece that will help you keep catching ’em even in these nasty conditions. We’ll teach you how to make the most of a muddy situation and fish through a flood on your local fisheries.

Professional angler Stephen Browning is one of the best in the business at breaking down flooded fisheries. Browning thrives on fluctuating waterways, having won three Bassmaster Opens on fisheries that frequently rise and fall: 2018 Ross Barnett, 2014 Red River and 2013 Red River.

Where do I start? 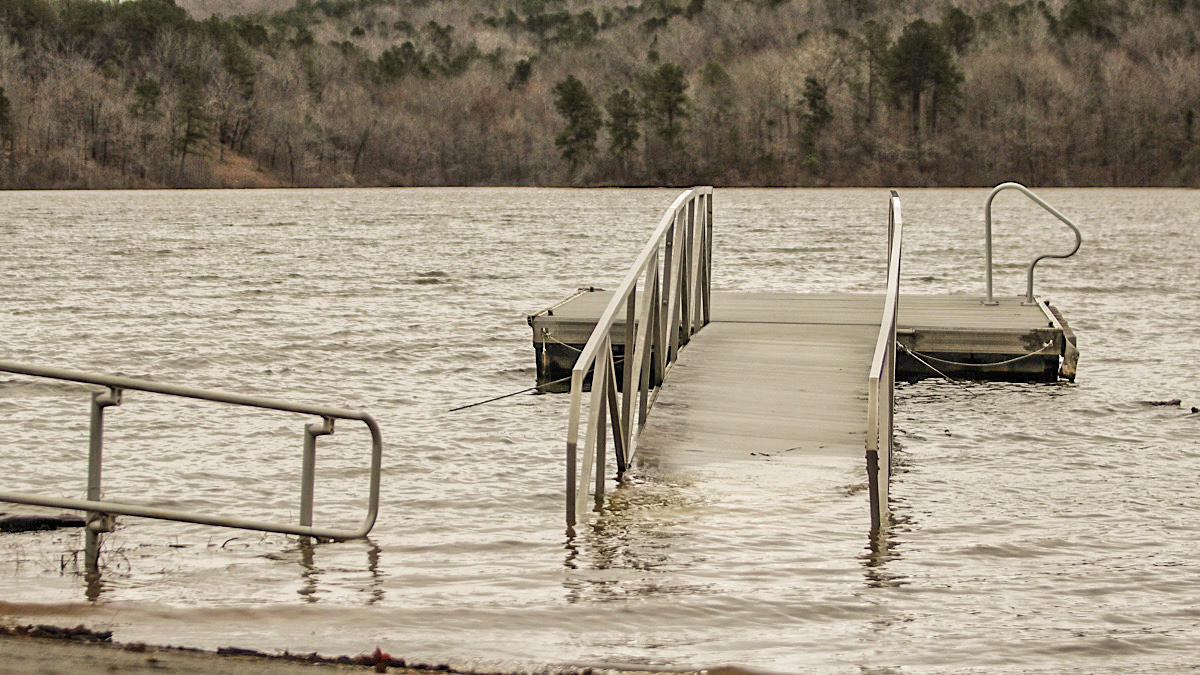 “The best advice that I can give anybody, is that they need to do their research on what that body of water normally does when it comes up or goes down,” Browning said.

He explained that some fisheries are able to move more water through them at a faster pace than others, returning to a somewhat stable level more quickly. Whereas on some other fisheries, the same amount of rainfall has longer lasting effects.

Bass are dependent on their environment-everything down to their body temperature is regulated by the world around them. So they have to be very in-tune with their surroundings. With a Bachelor’s degree in Fish and Wildlife Management, Browning is well aware of the behavioral norms that the majority of bass will share.

“The fish that live in that environment adjust very quickly,” Browning said. “They know when that water is rising and they know that as soon as it starts to fall they have to be able to get out. So that first little break line is what I’m going to generally target and where I’ll do the best.”

The break line Browning is referring to is often the original bank line on fisheries that flood but don’t come up a drastic amount. In these situations, he’ll look for super skinny water, but shallow water adjacent to deeper water.

“I just have a lot of confidence fishing super shallow. Way less than three feet. Three feet would be on the deep side. Probably 18 inches to two feet is kind of where I want to target.”

Browning likes this super skinny water in muddy, flooded conditions for a couple of reasons. First, the fish aren’t going to keep going once the water shallows up this much. They’ll typically hunker down and stay in close proximity to that first drop off that Browning already mentioned. But the shallow water column also helps him target the fish, knowing he’s always in the strike zone since the strike zone obviously can’t be bigger than the water column itself. In water that shallow you don’t have to wonder if you’re two feet above the bass or below them; you’re right in their face.

What baits do I try and where should I throw ’em? 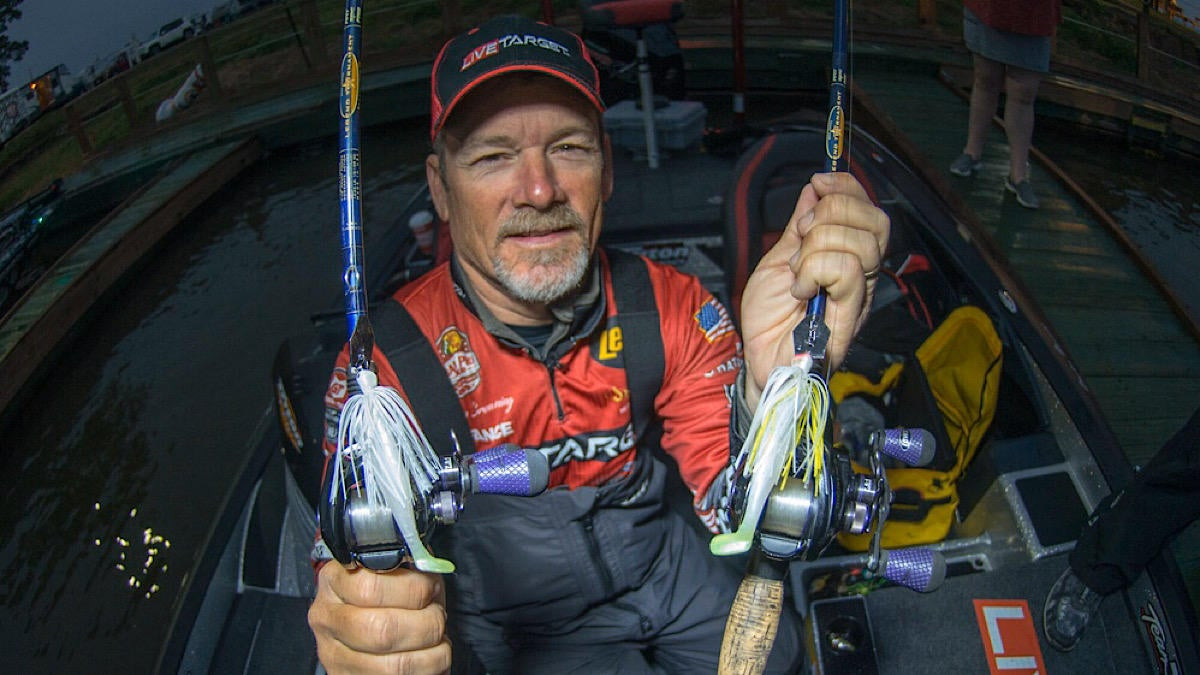 “In really muddy water, you only have a handful of bait options,” Browning said. “You’re throwing things like a spinnerbait, a ChatterBait, a shallow-diving crankbait, something that’s going to put off a lot of vibration. And generally speaking, you’re talking about fishing in a very small area of the water column. The catchable muddy-water fish aren’t going to be out there in 15 to 20 feet of water. The catchable ones are going to be shallow. Those fish may be out deeper too, but they are going to be the most lethargic fish in that body of water.”

When the water starts to clear up a little, but still has only a foot or so of visibility, Browning moves to either a black and blue jig or a black and red flake tube.

“With the tube deal, you need to shove you a little rattle up in the middle of it and that tends to be a difference maker.”

“A solid piece of wood, whether that’s a stump or standing piece of timber, seems to hold fish just a little bit better. Especially if there’s a little current blowing around them. Riprap seems to be a great place as well in that slightly less muddy water.”

Vertical cover like bluffs and bridges are great places to target bass on reservoirs since the fish can simply move up and down the structure without a lot of change in their scenery or routine.

“When a reservoir floods, that’s when you want to go find the bank. What I mean by that, is you want to find a steeper bank or bluff where the water falls pretty good and it doesn’t go back in the woods a long ways. Somewhere they can mill around up there shallow but still bail in a hurry.”

These places where you can reach the bank are important on flooded reservoirs since these fish, unlike those accustom to more frequent rising and falling water, will venture way back in the woods given the chance. Then they become very difficult to get to. Pinning them with their backs to the wall makes them far easier to target.

Vegetation can be very important in flooded situations, not only as cover, but also as a filter. This is something browning keys in on too.

“A lot of times the water right behind a grass line will be clearer, especially if it’s an emergent grass that mats up. The vegetation will clean that water out a little bit and there will be a small water color change back behind it. I’ve seen that a lot in gator grass and willow weed.”

And when Browning is taking about cleaner water here, he’s talking about barely being able to see your bait compared to not at all. That fine line between fishable and non-fishable water.

Flooded waters can be some of the most target-rich environments you’ll ever fish. So you need to pay very close attention to where your bites are coming from. In certain situations where the water gets up into the woods, fish can be so particular that they’ll only hold to one type of tree.

“I’ve seen it like that at Rayburn, when it used to get real high, especially in the spring time those fish would migrate to the pine trees. It’s kind of like a pattern within a pattern. I’ve seen a deal on Buggs Island when Jack Hains won on a big spinnerbait and he was only catching them on sycamore trees out on points.”

Browning uses these examples to stress that you shouldn’t randomly fish in flooded situations. Understand that it’s a pattern just like you’d see in normal fishing conditions.

“When the water is normal pool and you catch one on a piece of buck brush, they don’t want to be on a little stump, they want to be on buck brush for some reason. The bass are all kind of the same and they’re very habit oriented type creatures and that’s a big key, paying attention to where you get a bite.”

“You’re not going to be fishing for a bunch of numbers unless its a current deal and you find a little sweet spot. So you’re pretty much fishing for individual fish when it floods. Paying attention to the fine details of where that fish was caught or where you got that particular bite and trying to duplicate that, often that separates the guys who have success in flooded situations from the guys who just come in with a few fish.” 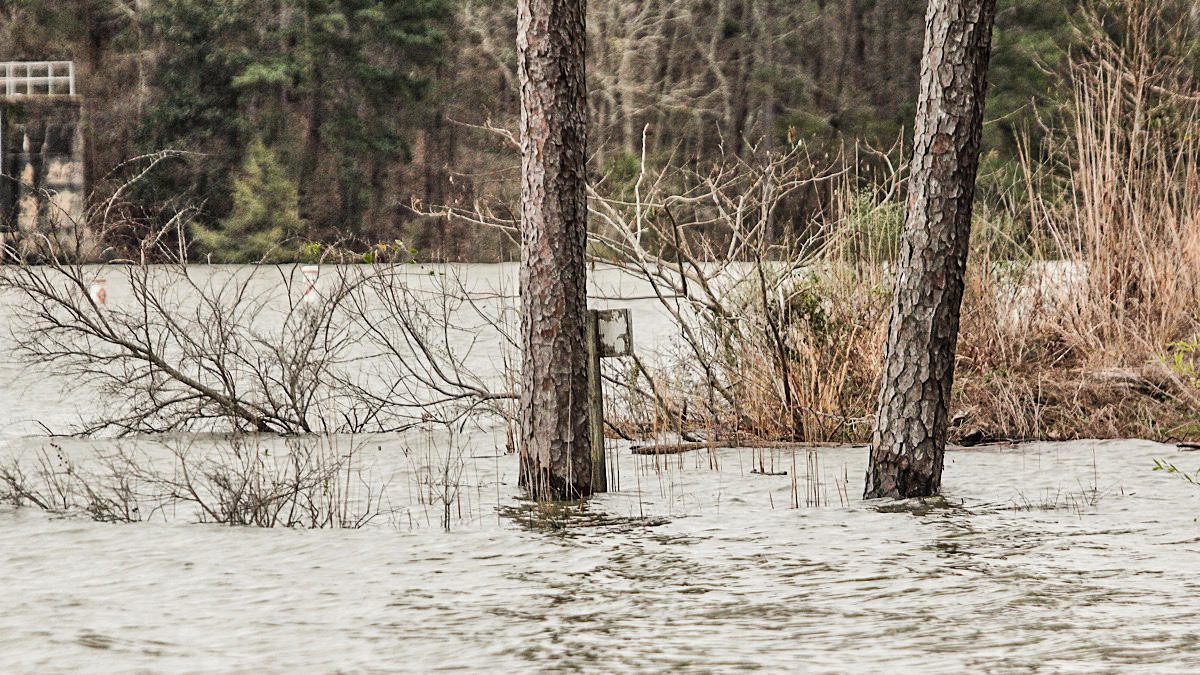 It’s also important to pay attention to where the flood water is coming from. Is it headed down the river from where it accumulated further north? Did the rain fall more on one side of the fishery than the other?

“Trying to avoid those places that have just a tremendous amount of runoff is key,” Browning said. “The major creeks on an impoundment are going to have more water influence and have a tendency to be a little bit dingier or dirtier than a pocket. And I think that sometimes plays a role.”

So when on a reservoir, Browning will usually steer clear of the major creeks in situations where they are extremely muddy. With one exception.

“If the water is fresh and running into the back of a place, I don’t care how dingy that water is, I’m going to run to the backend of that creek and fish those kinds of places. But that’s only on reservoirs.”

“Say you’re in a river situation where the water is coming through there pretty quick, generally speaking when the river rises, it pushes that water to the back. So I’m going to try to find places that don’t have a major creek influencing it, and the water will be cleaner back in the backs of them since the mud is coming from the main river and pushing back into them.”

It’s also important to target pockets facing away from the current in flooded river situations. These will have a better chance of staying clear in the backs as well and will obviously clear up faster as the water starts to drop.

How recently the fishery flooded is important too. As well as how long you plan to be there.

“If I’m going to be on a fishery for an extended period of time that has just come up, I’m going to try to find the cleanest water I can on the first few days. Places that flood really frequently and have a tendency to run a lot of muddy water, those fish get used to it. So they’ll feed quicker in that mud than fish will in a place that doesn’t muddy up as often.

“My theory is, let’s go chase the cleaner water first. And then if I’m there for multiple days I’ll go get in that muddy water. It just takes those fish a couple days to get used to that mud. It kind of makes them lethargic in the beginning but once they get used to it they’ll start feeding.”

To sum things up 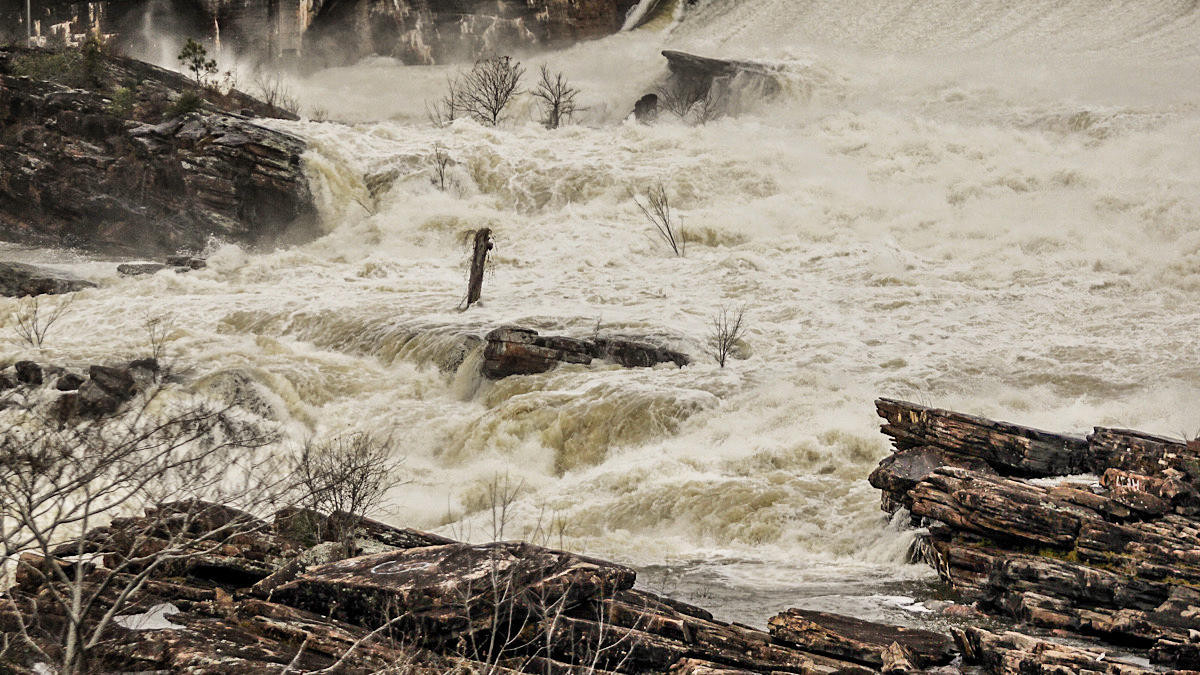 Not all fisheries flood the same. Some come up and go down quicker. Some rise 25 feet and some just two. Some have more current and in some the fish are less effected by the mud than in others.

Yes current is key and the fish like to have a little deeper water nearby when they push ultra shallow, but the real difference maker comes from the prep work. Studying the topography, weather patterns and past floods of a fishery to aid you in locating the cleanest water possible is likely the most important thing you can do to help yourself catch more fish in a flooded fishery.

Knowing where the muddy water is coming from will help you predict were the cleaner water will be first. Then it’s time to hunker down and pay attention to the details. Make the most of the few bites you get and use them to hone in on a pattern that will hopefully bring a few more fish to the boat.

Being consistent on various flooded fisheries is perhaps one of the most difficult things to do in the sport of bass fishing. But Browning’s track record proves it is possible if you know what to look for. And thanks to him, now you do.