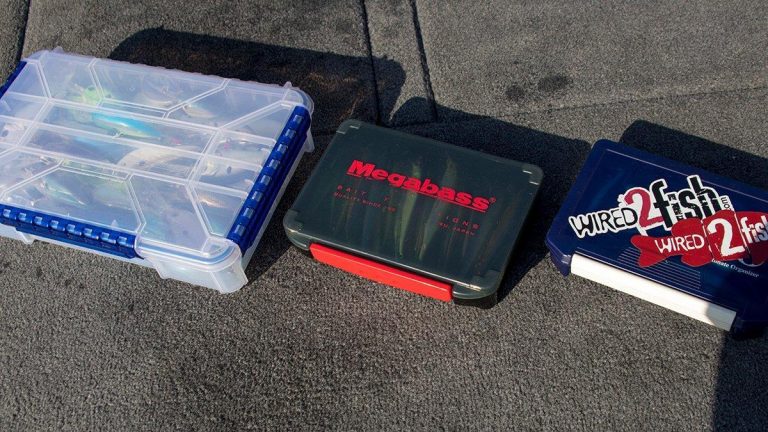 I’ve modified a simple way to store treble hook lures in tackle boxes to keep them from tangling up. If you’re like me you take a lot of various colors and sizes of different treble hook baits and you want to swap constantly with conditions and mood of the fish, but I get tired of fighting the baits always being tangle or locked together because of all the hooks.

We shared a video a couple of years ago from ice fishing angler Alex Keszler where he stored his lipless crankbaits for ice fishing in a peanut butter jar using rubber bands to keep the baits from tangling.

I didn’t necessarily want to convert all my crankbait boxes to peanut butter jars so I started playing with how to make it work in my current tackle boxes. And I’ve always been someone who wants to store smaller and more modular. So I can take out and put in new boxes in my boat easily as the bite changes. 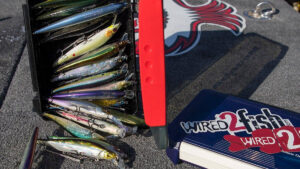 With the rubber band trick, I’ve found I can store a lot of baits in smaller boxes and they don’t get stuck together. I’ve also found for bigger baits, like say the oversized deep diving crankbaits like the Strike King 10XD, I can keep the baits from tangling up in bigger bulk boxes as well.

It’s also  alleviated a lot of me having to worry about having stuff in divided slots in the tackle boxes. I can sort of pile them in by color if I want and they stay pretty much where they are.

I also like that because the hooks compact to the bait, it seems I can get more baits into a smaller box because they stay neat and organized.

I’ve also found that you can dump all your baits onto the deck of your boat or where you are fishing, pick the one you wan and throw all the other ones back into the box and they don’t get stuck. It’s crazy how you just pick out the one you want, it’s not hung and then you throw the others back and they don’t hang on each other either. 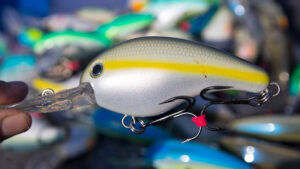 Basically all you really need to start is some small craft rubber bands. I bought mine at Walmart for a dollar in the crafts section. They are about the diameter of your finger and are perfect for looping treble hooks together.

If it’s a two-hook lure, just fold the back hook under the belly and pin it to the body and then bring the front hook back and face the treble hooks back-to-back. Then wind the rubber band around several times to hold the hooks together.

For a three-hook lure, fold the first two back to back and wrap a couple times together, then bring the back hook under the tail and loop the rubber band onto there. See the photo below for an illustration.

Then you just need some boxes to store them in. I still use tackle boxes, but I played around with putting them in other plain storage containers too. 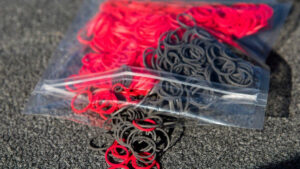 I keep extra rubber bands in my boat and in my shop at the house. They will break, dry rot and the other. But so far I’ve had them stored this way for months. I was getting some jerkbaits out the other day and one band hand broke. That bait was stuck on everything. The other baits all came right out perfectly. It solidified for me how effective it was.

I’m curious how they will do in extreme heat. The inside of the boat compartment can get very hot in the middle of summer, so I’m curious if there will be any issue with the rubber bands melting and affecting the baits at all. Something to keep in mind going forward with the idea. Probably I will just swap the bands out periodically (that helps with my OCD).

Thus far, I’ve been really pleased with how well it has worked storing bass fishing lures like jerkbaits, crankbaits and topwaters in a neat orderly fashion in smaller lunch box type of tackle boxes. And even how much nicer it makes taking a big huge box of big crankbaits and picking out exactly the lure I want and not trying to shake everything loose for 5 minutes every time I want to swap colors, sounds or size of my treble hook lures.

You can check out Andy Keszler’s video here. 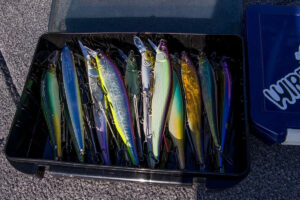 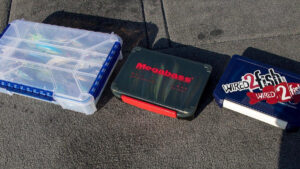