We have A LOT of stuff to fish with these days. There’s a technique specifically designed to target any bass under the sun… or the clouds, moon or whatever the case may be. You get my point. But for me personally, some of these techniques start to run together.

Take the spybait and finesse swimbait for instance. Granted, they obviously look a little different, but they also have a lot in common with their size, the gear used to fish them and the fish they’re used to target. And those fish, suspend ones, are some of the most difficult to fish for.

So I wanted to speak with an angler who is well versed in both techniques and have him help us breakdown the similarities and differences between a spybait and a finesse swimbait. Pretty quickly, professional angler John Crews came to mind.

Having designed a finesse swimbait himself, the Missile Baits Shockwave, and having had a heavy hand of influence in the design process of the new SPRO Spin John 80, Crews is the perfect resource to help sort out this mess.

“It’s kind of like a spinnerbait and Chatterbait are similar but different,” Crews said. “They’re both just kind of tools that can be used in a similar fashion to target a lot of the same fish. They can both work the whole water column really. But the finesse swimbait is more efficient once you get past 15 feet.” 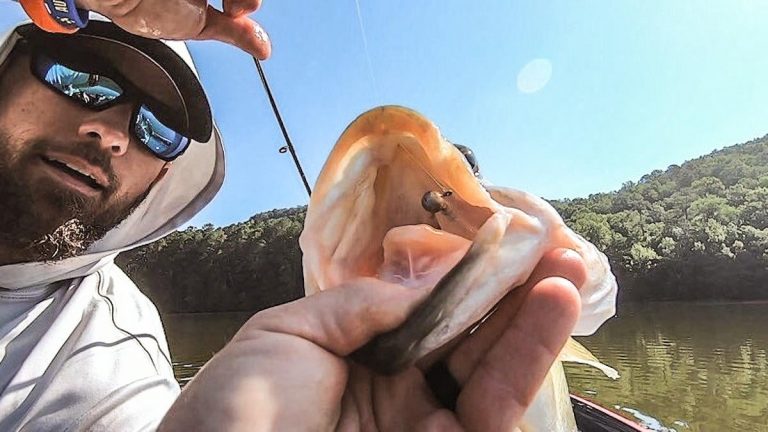 Crews throws both baits on basically the same gear. He uses the same spinning rod and reel combo spooled with 12-pound test Sunline Xplasma Braid for his main line but varies slightly on his leaders.

“I throw a little bit smaller leader line on the spybait because I think it helps with its rocking action,” Crews said. “I throw 6-pound Sunline Sniper most of the time and I’ll go up to 7 sometimes but that’s the limit. And with the little swimbait I’ll start with 7-pound test and sometimes I’ll go up to 8.”

Crews uses a longer leader for both presentations, 20 to 22 feet long, which is something he’s gone to for most of his spinning gear presentations. His reasoning for doing so with the spybait in particular, the added stretch seems to help keep the fish from tearing off the small trebles as they near the boat.

How to fish the baits 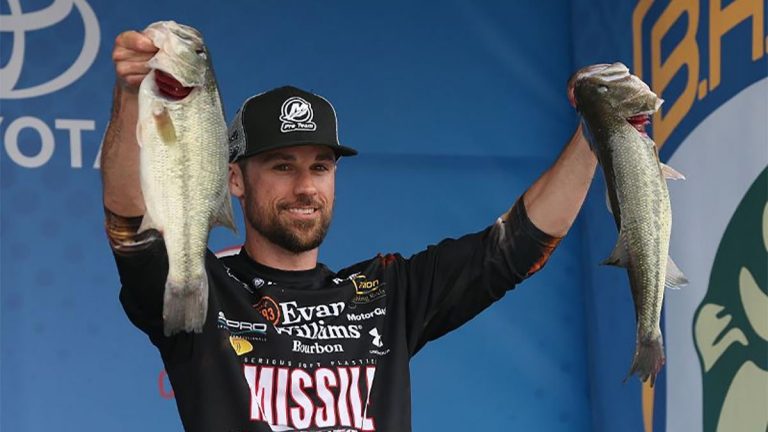 How Crews fishes the baits is another perfect example of how these two techniques are very similar, but still very different. You want to start out with a long cast and then count both baits down to the desired depth you want to start fishing them at. But that’s where things start to differ.

“I’m going to fish both of them on a pretty steady retrieve most of the time,” Crews said. “When a spybait is fished at a steady retrieve its depth will vary as it pendulums back to the boat, almost like a crankbait. But a single swimbait doesn’t pendulum, it will just stay at whatever depth you start it at and then taper up as it nears the boat.”

Occasionally Crews will let both baits free fall, but the resulting action is very different with each bait. The spybait will have a slower, hard-rocking action on a horizontal fall where the swimbait will nosedive with a tail kick and a vertical fall.

“One thing I will do with the swimbait that I won’t do with the spybait is adjust my rate of retrieve. I’ll give it a little burst. Not a jerky burst, but slowly speed it up or slowly slow it down. Sometimes I feel like the bait will be going steady and that little dip or burst will trigger a strike. You can’t really do that with a spybait. It’s either sinking or a steady retrieve. You just want a spybait to rock back and forth as much as it can.”

In general, Crews has to work the spybait a little bit slower in order for the bait to produce the desired rocking action and flash that it’s known for. And since you can adjust the size of the swimbait head, the swimbait is much more versatile when it comes to speed of retrieve. And more efficient when fishing in deeper water.

When you do get a bite, there’s not a lot of difference on what happens next for Crews, but there is a little still.

“On both of them, the rod is going to be pointed kind of right at the bait on the retrieve and both are just going to be a sweeping hookset and then you want to reel as fast as you can and let the rod load up. I put a little more wood to them on the hookset with the single swimbait because you have a little bit bigger single hook, but I’m going to load up on both of them about as hard as the spinning rod will load up.”

When fighting the fish, Crews admits it takes a little longer with the spybait because of the slightly smaller line and small trebles. But thanks to his setup being dialed in, he is able to play the fish and rarely loses one close to the boat.

“I don’t really have a lot of problems with fish coming off. If they come off of either bait then they’re going to come off pretty quick on the first jump.”

When and where to fish both baits 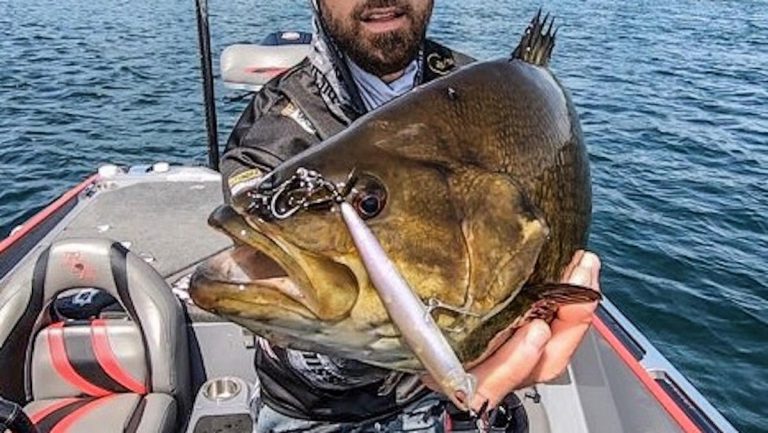 As far as when to throw these baits is concerned, you’ll find a lot of similarities. Crews will typically have both of these baits tied on when he is fishing for suspended fish and he doesn’t really prefer either for any particular species – largemouth, smallmouth or spots. Both are pretty much a clear water deal for him and they’re both good year round. And neither bait really needs wind in order for Crews to throw it.

“They’re both really good in current too. The swimbait may be a little bit easier to fish in current, but it’s marginal. And you can fish the finesse swimbait a little easier than the spybait if it’s really windy.”

When it comes to where to throw these baits, the similarities start to fade. The reason being, suspended fish is a vastly broad term. A fish can suspend in 5 feet or 50, around bridge pilings or brush or in open water, et cetera, et cetera, et cetera. So we find some of the key differences in these two presentations in the simple question of which works best where.

Because of that slow flash and rocking action that it has, Crews believes the spybait draws fish from farther away than a finesse swimbait does.

“It’s almost more like a jerkbait as far as how far they’ll come to eat it. They’ll come from a ways off.”

That drawing power makes the spybait extremely effective in open water scenarios such as long running points or bluffs where fish are relating more to the contour than they are to a particular piece of cover.

Now when it comes to fishing around cover, the finesse swimbait shines. Having only one hook and it being pointed upward on the retrieve, the swimbait is far less likely to hang when fishing around or even through cover versus the spybait with its six hooks hanging beneath it.

“I’d say the single swimbait is definitely better for dragging along the bottom too. And there are definitely times where that is the ticket, like in the wintertime, where you want the bait to bounce off the bottom.”

In conclusion, both the finesse swimbait and the spybait are extremely important tools that need to be added to the ever expanding angler’s arsenal, especially as it pertains to suspended fish. But knowing the intricacies of what sets the two apart will make you better with both. Take these notes from Crews and see if you can’t better distinguish the when, where and how to fish these two baits the next time you’re out on the water.