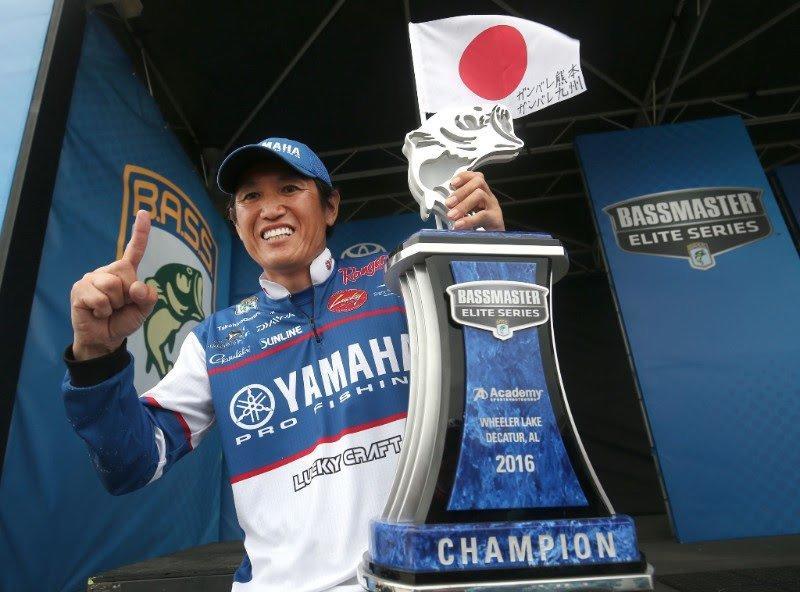 In 2004, Japan native Takahiro Omori won the GEICO Bassmaster Classic during the final minutes of the final day. On Championship Sunday of the Academy Sports + Outdoors Bassmaster Elite at Wheeler Lake, Omori earned another win after putting together a final-day catch of five bass weighing 25 pounds, 3 ounces.

Omori, who now hails from Emory, Texas, finished with a four-day total of 81-6, more than 4 pounds ahead of Saturday’s leader, Dave Lefebre of Erie, Pa.

Omori struggled on Thursday’s opening round of competition weighing only 10-7, which put him in 72nd place. He made a powerful comeback on Friday, catching 23-3, which bumped him all the way up to fourth place.

Following Saturday’s competition, Omori climbed into second place after weighing a mixed bag of large- and smallmouth bass for 22-9. The former Classic winner kept his momentum rolling and produced the tournament’s heaviest limit of bass on Sunday for an impressive come-from-behind victory.

â€œI found the spot where I caught my fish on Monday of practice, and I shook off several fish that I knew would weigh up to 6 pounds,â€ Omori said.

During the practice period, it’s common for anglers to avoid setting the hook in hopes the same fish will bite again during official competition days.

â€œI knew the area was pretty special, but I was concerned the pattern had changed after a tough first day,â€ he said. â€œYou never know with these fish; sometimes they do exactly as they had in practice, and other times they just disappear for what seems like no reason. And, sometimes the fish just move around and you have to find them again. That’s what I did Friday through today, and it paid off.â€

He was fishing a popular area known as Decatur Flats, which was only a few hundred yards from Ingalls Harbor in Decatur, Ala. The flat is only 3 to 4 feet deep, but it’s adjacent to the main river channel, which helps the area reload with fresh bass daily.

â€œEach day there were new waves of fish moving in, but I wasn’t sure that I could keep catching over 20 pounds,â€ Omori said. â€œThat really helps when you’re trying to win a four-day tournament.â€

Omori caught most of his bass during the morning hours, especially early, but he was able to upgrade with bigger bass as the day went on. His baits of choice included a walk-the-dog style topwater, a 5-inch swimbait in a shad pattern and a Carolina-rigged worm.

After leading Friday and Saturday, Lefebre didn’t have the big bites today that he was expecting. Lefebre finished in second place after a Day-4 weight of 16-10 and total of 77-3

â€œOn Saturday, I purposely backed off of some of my better spots hoping to catch those fish today, but it just didn’t work that way,â€ Lefebre said. â€œIf I could go back and change that decision, it probably would have changed the outcome. But, you can’t change the past. I made a lot of solid decisions and fished a great tournament.â€

Lefebre said it’s hard to second-guess a game-time decision, but he believes that heavier weights during the second and third days of the tournament would have helped his four-day total.

His baits of choice throughout this event included a new Terminator Popping Frog that is set to be unveiled at ICAST 2016, a Terminator buzzbait with a copper blade, a 1/4-ounce Yamamoto black and blue swim jig and a Terminator swim jig in the same size and a similar color pattern.

â€œMost of my best water was within five miles of Decatur,â€ Crews said. â€œBut, I really had to mix it up between several areas, and I drove back and forth several times each day. My pattern had a spawning shad component to it, and that made the first two hours of the day key to catching the right fish.â€

Crews caught most of his fish on walking topwater baits, a fluke-style soft plastic a Missile D-Bomb flipping bait.

Greg Hackney was awarded $1,000 for the leading the Toyota Bassmaster Angler of the Year points race at the end of the event.

Crews also earned the Power-Pole Captain’s Cash award of $1,000 for being the highest-placing angler who is registered and eligible and uses a client-approved product on his boat.

Lefebre earned the Livingston Lures Leader Award of $500 for leading on the second day.