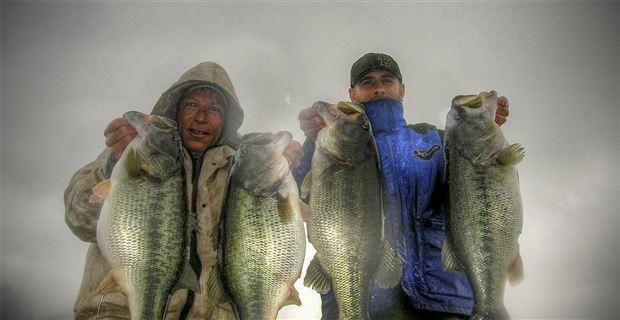 I was talking with a professional angler friend the other day, and we discussed how the swimbait has become the jig of bass fishing in recent years. Yet there is still just a small faction of bass fishing fanatics who throw the really big swimbaits. I will admit I was slow to move to that camp too, but the memories I’ve had now on big swimbaits drive me to throw them more. Some of the catches and things I’ve seen throwing big swimbaits, I’ve never experienced with any other lures. And that is where throwing big swimbaits became addicting for me.

Knowing, however, that a lot of anglers are still leery of throwing big swimbaits, I tapped one the West’s best, yet relatively unknown outside of the California big bait scene, to pick his brain about how anglers can get started and create these memories that have led to the addiction we and others have now for them.

Don Moorman, nicknamed the “Don Father” because he has been shooting videos of his big swimbait catches on Huddleston Deluxes and Deps Slide Swimmers for more than 10 years, has done things in bass fishing that few will ever experience. He has several 40-plus-pound stringers to his credit. He’s caught more than 50 bass weighing more than 10 pounds. And the vast majority of those fish have come on two very large swimbaits. For the sake of getting started, we’ll stick to fishing the Huddleston Deluxe since that is a bait that he turned so many anglers onto out west.

The biggest deterrent early on for big swimbaits being adopted by more anglers was that all early big swimbaits from companies like Castaic Lures (which Ken Huddleston designed soft baits for initially) were all trout imitators.

“I hear guys tell me all the time at shows, well I don’t have trout in my lake,” Moorman said. “So you’re telling me, if I went to Lake Chickamauga and released a bunch of trout in the lake near some big bass, they wouldn’t come run them down and eat them?”

Makes you stop and think about the nature we all know about bass. And suddenly a bass eating a swimbait shaped like a trout doesn’t matter much anymore. Today, anglers can choose from wide varieties of shad swimbaits, trout swimbaits, hitch swimbaits, even perch and blueback herring swimbaits. And the Huddleston  Deluxe comes in colors that mimic other baitfish, remaining one of the top big bass choices all over the country.

How to get started

You do need a rod that can handle a 4 or 5-ounce lure. There are a lot of good big swimbait rods on the market so anglers have a lot of options. Moorman uses some older custom rods from MOAB, Cousins and a selection of Hudd Rods made specifically for throwing Huddleston swimbaits. He sticks with 25-30 pound P-Line PF Copolymer line. He prefers its small diameter, smoke blue color and the low stretch it has in those sizes. He will throw a 10-inch Hudd on 30-pound and 8-inch Hudds on 20-25 pound line. His reel of choice right now is a Daiwa Tatula 200 HD.

“Not everyone can afford to have a setup for just swimbait fishing so I like that Tatula reel because you can go back and throw other more conventional bass stuff on it too.”

Where to find big bass with Huddleston swimbaits

“I suppose it’s like anything else in bass fishing,” Moorman said. “Finding good big fish spots take a lot of time and trial and error. You might hit a fish on a spot, then find 10 more spots that look identical to it and never get hit there. But for the most part I’m focusing on those standard feeding zones that we’ve all been taught about bass fishing for decades.”

For Moorman, that means fishing points, flats near breaklines, saddles, humps and other irregular features like ditches and depressions where a bass can move in and out easily to feed and rest and recover. To make the process shorter, start with places where you have caught good fish on other more conventional lures and expand from there. Maybe you’ve caught some big fish on a certain point. Start there and work it from various directions.

“I often sit shallow and cast deep, especially in late winter and early prespawn. That way I can cover the whole water column from extremely deep to just several feet deep.”

But Moorman will hit a likely area for multiple directions and he often finds one cast that seems to be the way the bait needs to come through that zone to catch the really big fish.

“Oftentimes guys will tell me they hit something on the bottom with their Hudd and then got a bite,” Moorman said. “They think they hit a stump or a rock, but what they did was hit a subtle depth change that those fish like to lay down in or behind. I have several places where the depth just changes a foot or two and I’ve actually seen bass 10-13 pounds just laying and swimming in that little break.”

And a follow or a bite and a miss are equally as important as catches in this game. If you can draw a fish from an area and it doesn’t bite but follows back to the boat, or slams it and doesn’t get the bait. Then you’ve found a big fish area, you just need to refine your presentation, angle, direction or something else. So keep attacking in different conditions from different ways.

“I won a swimbait event on a lake I had never fished swimbaits on before. I looked at the map and looked for those feeding zones. I looked for long sloping points near a drop. Flats near a drop. Things which many anglers will just look at as boring contours. But it’s the same things we’ve been told for decades that hold bass.”

The retrieve is always slow and low

Some anglers call it digging. Others call it bouncing. But Moorman keeps his Hudd just touching the bottom periodically without catching too much. To achieve that he has to wind the swimbait ultra slow. A lot of people think they are reeling slow, but on today’s high speed reels, one handle turn can sometimes take up 30 or more inches of line. So he teaches anglers to watch the actual spool on the reel. See how slow it turns to slow yourself down even more and then feel for the bottom. If the bait is catching too much or too hard and often, speed up just a hair. If it’s never touching stop and slow down periodically to bump.

A Huddleston swims very well at ultra slow speeds. This is a big meal for a fish. He’s only got to hit this one time to be fed for a while and the fish knows it has to kill it. So the bite is usually very aggressive.

“Making clean casts is so important. The more you get hung up the more you lose a chance to catch a fish off a good area. So I fish a lot of single jig hook Hudds. Even losing a fish will mess up an area. “

Moorman is a grinder. When a fish hits and loads, he hits back hard and with the rod tucked under his arm and pinned to his side, he litterally starts winching on them. And never lets up until the fish is in his net. He’s had countless bass pop loose in the net. He’s convinced that one split second of tension lost, a big fish can over power and throw a giant lure loose. He always fishes his Hudd with a top jig hook. So he’s not afraid to apply the pressure.

“The more that fish can throw his head and change the tension on the line, the more he is in control of getting that hook out of his mouth,” Moorman said.

The big swimbait game is trying

Moorman taught me how to swimbait fish. I caught my first big bass with him, a 7 1/2-pounder on a swimbait fishing one of the canyon lakes out west nearly 10 years ago. It took me a long time to adopt the mentality required to fish big baits enough to be successful. I throw a lot of 6-8 inch swimbaits now on Kentucky Lake. Some days you won’t catch much. Some days you will catch nothing.

But some days you will catch really big fish. And several of them. I’ve had some 30-plus-pound days on Kentucky Lake because of swimbaits. Last summer I had one of the most amazing and nerve racking days of my life because of giant swimbaits. I had several follows on an outing where no other lures were getting bites but 6-9 pound bass were coming all the way back to the boat and sharking on the swimbait, even humping the water at times. It will open your eyes to new possibilities.

But there is a lot of trying times and days to find the reward that is always amazing when it happens. Even the days I don’t catch them but have big fish follows, I get such a charge now. Those days eat at you as an angler, but they are extremely rewarding knowing you are getting the attention of bass most anglers will never see in a lifetime of fishing.

“I could never have caught all these fish over 10 pounds or had these 40-pound stringers without spending days and weeks chunking big swimbaits like the Hudd.”

You have to be willing to sacrifice bites and catching fish to see those kind of rewards. But if you will put in the time, you will have some magical memories that 99% of fishermen will never get to experience.

More tips on fishing for big bass with big swimbaits: