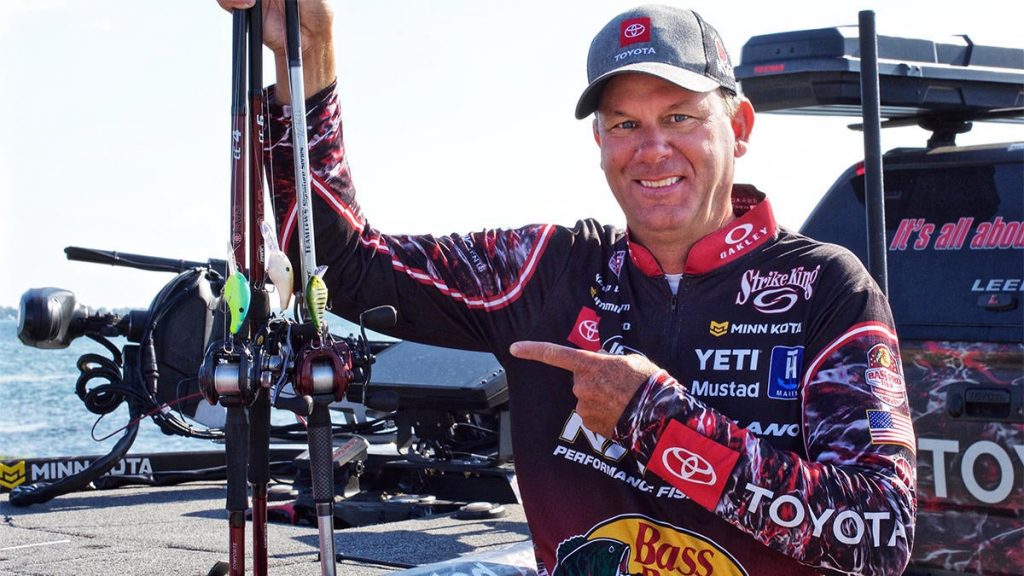 It’s no secret that finesse techniques play a dominant role in catching smallmouth bass throughout most of the year, but when the calendar turns to September crankbaits become an extremely effective way to load the boat with aggressive smallmouth.

We’re seeing this play out on Lake St Clair for Stage Seven of the Bass Pro Tour this week just as it seems to happen every fall. Few people on this planet have caught more smallmouth bass with crankbaits than Kevin VanDam. The Team Toyota pro has learned the subtleties of cranking for smallmouth throughout his lifetime of living in Michigan and targeting these aquatic footballs each fall and winter.

One thing is certain; there are a few major differences between smallmouth and largemouth cranking, KVD graciously laid out these distinctions below.

Perhaps the biggest difference between smallmouth cranking and most other crankbait applications is it’s not necessary maintain bottom contact throughout your retrieve. In fact, KVD prefers his crankbait to ride a few feet off the bottom.

“Whether it’s grass, rock, or sand I don’t want my crankbait digging into the bottom for smallmouth,” VanDam said. “Smallmouth usually live in somewhat clear water and love to feed by looking up. That’s why cranking in the fall is so effective, you use their aggressive nature against them by burning a tasty looking meal over their heads. They can’t resist it.”

VanDam chooses what crankbait to throw based on the depth his boat is sitting and purposely chooses something he can keep a few feet off of the bottom. If he’s targeting a flat in five to seven foot of water that’s usually a Strike King KVD 1.5 Squarebill. If he’s focused on deeper flats in the fifteen to twenty five foot range VanDam leans on a deeper diving Strike King 5XD or 6XD.

One of the benefits of not needing to hit the bottom with your plug is you can upsize your line choice. VanDam typically uses 17-pound BPS Fluorocarbon for smallmouth cranking whether he’s using a squarebill or a deeper diving option. Much heavier line than he would typically crank with in most scenarios.

It’s all about speed & covering water

The next nuance VanDam pointed out for smallmouth cranking is it usually isn’t a specific target deal like when cranking for largemouth. KVD’s normally trying to keep his crankbait near a specific depth zone for smallmouth, but he’s casting in all directions trying to intercept the roaming brown bass.

“Smallmouth cranking is all about covering water and finding aggressive fish,” VanDam said. “If you know where they are sitting on a rock pile or a grass line, there are other techniques you can show them like a dropshot or something. But if I need to cover a vast flat, whether it’s five feet deep or twenty five, there are few more efficient tools at covering water than a crankbait.”

KVD uses a slightly faster 6:4:1 gear ratio on his Lew’s BB1 Pro Speed Spool than he would normally adopt for crankbait fishing and he reels as fast as he can. He’ll still give occasional pauses, rod snaps, and other erratic action during his retrieve, but VanDam wants his crankbaits moving fast.

When it comes to rod selection, Dr. Crankenstein employs his 7-foot Lew’s Team Signature Series cranking rod for squarebills, and either the CC4 or CC6 options from his line of KVD Composite Cranking Rods when throwing a 5XD or 6XD.

Color selection on one extreme or the other

“I’m either going to be throwing something super natural and subtle, or I’ll be on the complete other side of the spectrum with super bright and loud colors when it comes to smallmouth cranking,” VanDam explained. “My color selection is on one extreme or the other, based on the weather and water conditions.

“Smallmouth are sight feeders, so you want a bait they can see from a long way off. I usually start with something super bright like a Chartreuse Sexy Shad or Powder Blue Back Chartreuse. If it’s a slick calm and sunny day, or I can’t get the fish to commit to something bright I’ll show them natural colors like Strike King’s Green Gizzard Shad, a natural bluegill imitation, or a perch pattern.”

If you plan on fishing for smallmouth in the fall or winter, take VanDam’s advice with you on your next trip to the water. These subtleties set smallmouth cranking apart from most traditional crankbait applications anglers are used to in the south. KVD’s insight will shorten your learning curve and help you catch more fish.