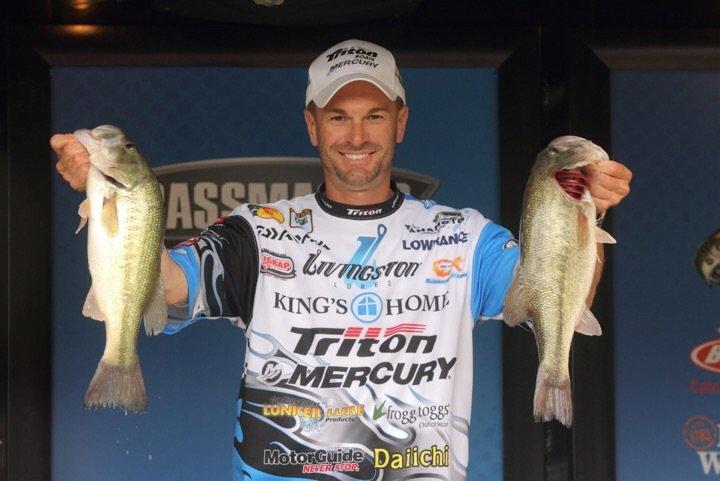 For the first two days of competition, the Zippo BASSfest at Kentucky Lake presented by A.R.E. Truck Caps has been like most any other Elite Series event.

Besides having 13 extra anglers invited from the Bassmaster Open circuits, the format was exactly the same. But on Friday, a major shift in the rules left no doubt that BASSfest is a special event with its own distinct flavor.

While the Top 50 pros from Days 1 and 2 rested and conducted seminars for fans, the remaining 74 anglers took part in a unique Second Chance tournament on Lake Barkley. While no money was awarded for the one-day free-for-all, the Top 10 finishers earned the right to rejoin the rest of the field Saturday at Kentucky Lake and fight for their share of the $850,000 purse.

Alabama angler and 2014 GEICO Bassmaster Classic champion Randy Howell won the Second Chance event with 18 pounds, 1 ounce. He earned the right to continue fishing Saturday despite being in 63rd place after the first two rounds.

“We fished here in 2006, and I ran to Barkley in that tournament,” said Howell, who didn’t devote any time to Barkley during the three-day practice period before BASSfest. “I ran to a spot today where I caught fish in that tournament. I still had my waypoints from way back then, and I loaded them in last night.”

Howell caught a 3-pounder on his first cast and quickly put together a strong limit, using a variety of lures. Not knowing exactly what he’d need, he had 12 rods on the deck of his boat ready to go.

The three lures that produced best for him were a Livingston Deep Impact 18 Crankbait, a Yamamoto 12-inch curly-tail worm on a 3/4-ounce Magnum Shaky Head by Lunker Lure and a homemade bucktail hair jig. He was fishing a hump where the water dropped from 10 to 15 feet, and he said most of the fish he caught were sitting on the dropoff.

“It’s really cool for that one spot to have paid off from that many years ago,” Howell said. “It’s just amazing that those fish were still on that spot, and nobody had fished it or beat it up. It was a blessing.”

Texas angler James Niggemeyer finished second with 16-11, meaning he’ll go from 88th place after two days to having a second chance to fish for the BASSfest trophy.

With no prior experience on Lake Barkley, Niggemeyer said he just went out and “fished what looked good.” When his early shallow-water plan didn’t work, he switched to a KVD 2.5 crankbait and caught three good fish.

Then he got a little help from Louisiana angler Cliff Crochet.

“I ran into Cliff, and he needed a Rage Craw trailer for the jig he was fishing,” Niggemeyer said. “He told me all about how he was catching them on a jig, and I thought it sounded like a perfect way to fish the long stretches of dead water in between the areas where I was catching fish on a crankbait.

“I did that, and it ended up working.”

All of the Top 10 finishers will earn at least $10,000 when the main tournament concludes. But it was Short who made the biggest jump in the standings after finishing 122nd out of 124 anglers the first two days at Kentucky Lake with one fish that weighed just 1-11.

He caught his fish Friday off a hump in 12 feet of water on a 6th Sense Crush 300DD crankbait.

“It was catch them one-two-three real quick, and then nothing for a long time,” Short said. “That’s the way it went for me all day long.”

Short was another angler who had never laid eyes on Barkley before Friday.

“I had never been here in my life,” Short said. “So after the first day on Kentucky Lake, I went to (fellow Elite Series angler) Ott DeFoe and asked what he would do if he was going to go to Barkley on Friday and fish. I knew he wouldn’t lie to me, and he told me some things that ended up helping me find some fish.”