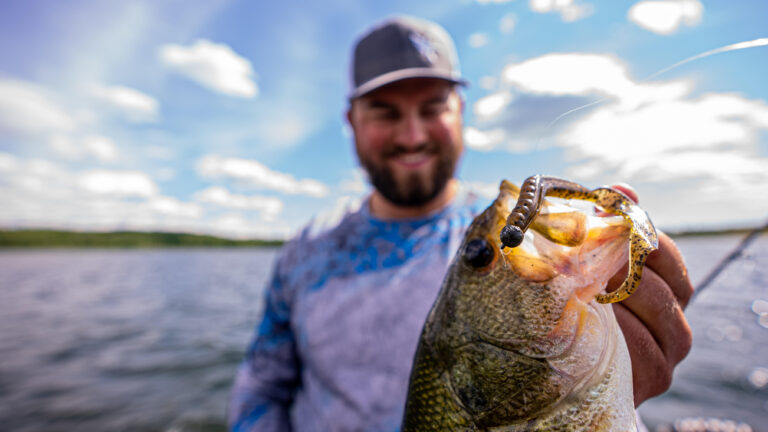 A “Tried and True” staple of the sport, the jig worm is still one of the easiest ways to catch summertime schooling bass. Wired2fish intern Nick Dumke shares why he loves a jig worm so much when fish go deep, as well as how he utilizes the bait to its full potential.

A bait that got Dumke into the world of bass fishing, the jig worm has remained on his deck ever since. The simplicity of this rig shines through in its name, a jig and a worm. Dumke prefers either a curly tail worm or a stick bait style. When it comes to setup, match the rod to the cover you are fishing. The thicker the weeds, the heavier the rod. Either way, Dumke prefers a longer twig for maximum casting distance and fighting power. He also recommends a little bit heavier fluorocarbon leader when fishing around thick weeds to give yourself the ability to get fish out of the jungle.

Dumke immediately begins the day graphing high percentage areas, specifically main lake points leading out of spawning bays. These particular bass were positioned on a distinct grassline falling into a deeper rock edge — perfect habitat for a school of largemouth. Dumke explains how he uses Humminbird MEGA 360 Imaging to line up his casts. Despite his use of electronics, Dumpke stresses that the jig worm flat out catches bass if you focus on outer grasslines.