“I’m not as smart as Kevin VanDam and I’m not as good as David Dudley; I can just get my baits in some places others can’t.”

Craig Powers shared that thought with me on a day of fishing Kentucky Lake years ago. At the time, I didn’t grasp the importance of knowing how to cast to tight openings in cover, especially in the shallow-water professional fishing game. Not every lake offers great offshore fishing, but most offer windows of opportunity for shallow fishing, especially around cover like laydowns, grass, bushes, overhanging trees, docks and more.

There are 7 things that will improve your shallow casting:

We’ll discuss how to cast better in a minute, but it’s probably better to understand why you need to from these pros.

Our casting has gotten lazy

I shared a boat with FLW Tour pro Terry Bolton so we could shoot some video for Wired2fish. Now, I consider myself a decent angler, probably more a student of the game than a guru like those who do it for a living, but I can hold my own most of the time. After spending one day with Terry Bolton, I realized I’d forgotten the importance of making precision casts to and beyond a target.

“I can’t hold Andy Morgan’s minnow bucket,” Bolton said in reference to his own casting. Lord help me, I have a ways to go if that’s the case. And so do a bunch of anglers I’m sure. Bolton placed his importance on casting after spending one day as an observer back in 1994 with Andy Morgan. He left the boat that day, deciding he did in fact know nothing about how to cast, and he should probably remedy that if he was going to pursue a professional fishing career.

The fact is with side scanning and offshore fishing becoming more prominent, the desire to dice up shallow cover has dwindled in recent years. Now we’re all bombing long casts offshore. Yet, in talking with several pros the last two weeks, the same few names kept coming up as great casters, all who have won or do consistently well fishing shallow: Andy Morgan, Andy Montgomery, Bryan Thrift, Tommy Biffle, Chris Baumgardner and Jason Christie.

One cast is critical, always

Elite Series pro Gerald Swindle probably doesn’t view himself as a brilliant caster, but he’s mentioned too when it comes to getting a little jig into tight places around a dock. He explained the importance of one cast to me recently.

“I’ve seen times where one fish meant your whole tournament, even your whole season. Because one 3-pounder late in the day to make the cut, that would seal the deal for you making the Classic was all you needed, and you saw that fish up shallow near a piece of cover. You make a big splash, loud commotion and plunk down on top of it, and the bass is gone with your season.  You’ve got to be able to lay it in there perfectly, quietly, effortlessly. You’ve got to psyche yourself up like that all the time to keep from getting lazy. Tell yourself that this cast is going to get you that bite you need to make the cut. Put that pressure on yourself to get good with your casting.”

Casting as a necessity

“It really pisses me off when I make a bad cast,” Morgan said, half joking. “The older I get though, the more I seem to make. I can’t always lay it in there perfectly like I used to.”

Morgan’s father taught him to cast well to shallow cover. Out of necessity, Morgan learned to do it both left and right handed because his father was yanking big bass way up under and behind close cover and if you were behind him there was nowhere to cast right handed. So he had to teach himself how to lay a bait in there quietly with a backhanded left-hand pitch. He would see his father catch em up there and decided he need to learn how to cast his baits way up under and around shallow cover as quietly as possible too.

According to Morgan, Swindle and Bolton, these 7 things will help improve your casting:

This might be the number one rule of being a good caster. There are angles and openings that become apparent in all types of cover depending on where your boat is relative to the target. Don’t force a cast into a small opening, if the opening becomes a bit larger by inching forward a few feet on the trolling motor. You’ll find that getting in position often allows you to get your bait a lot further back into cover where it’s likely other anglers have missed.

This is an obvious mistake. We see an opening, we want our bait to go back their ten feet past the opening so we think we need to catapult it in there to get it there. When in essence a good roll cast, with a sufficiently weighted bait and a nice load on a rod will shoot the bait plenty far in and past the cover without causing you so much headache with backlash and tangled lures.

This might be a separate article, but essentially, a roll cast is performed with the lure about 8-12 inches from your tip and drawing a circle with your rod tip out to the side from 10 o’clock all the way back around to 10 o’clock. The trick is training your wrist to swirl the bait and rod around sufficiently to load the rod and send the lure shooting very low to the water to its target, thus minimizing the splash and commotion of the cast. You can practice this in your yard or out on open water away from targets.

The fact is many anglers recognize bass holding targets, but in the anxiety of making a good cast to the target they lose focus on the target and focus on their rod or lure. Always focus on the target the whole cast. And back to No. 2, look ahead for your targets and wait until you’re in position to make the proper cast. Don’t miss a good presentation because you didn’t see the next bush coming.

A 5-foot tall angler will have a hard time roll casting a 7-foot, 6-inch rod. You want to use a rod that you can cast well without hitting the tip on the boat or the water when casting. The longer the rod, the more out instead of down your rod position will be on the cast. The only drawback can be that it’s harder to horse fish out of heavy cover with a shorter rod. So use the longest rod you can get away with and still be efficient. Andy Morgan uses a 7-foot, 3-inch a lot, but he’s really tall. Bolton likes a 6-foot, 10-inch rod for his stature. Likewise Swindle often uses a 6-foot, 10-inch rod to shoot small jigs way up under docks.

7. Master all the casts

The fact is you don’t have to just roll cast. Maybe based on the angle, a pitch, flip or skip, or as Morgan called it a “roll cast with some heat on it”, presents the lure more effectively in the cover. Morgan recalled winning a BFL (Redman) Regional on Kerr Lake many years ago fishing behind other guys and pitching a spinnerbait deep behind docks and between docks and pontoons with 3-inch openings. He caught two big key fish right behind another competitor on a set of docks that sealed the win and his All-American berth. The fact was the bass hadn’t see a spinnerbait presented in those places, and it paid off with a big win.

Casting, like anything else takes a lot of practice if you want to get really good at it. No amount of reading will do that for you unfortunately. But at least you have an idea of why and how to cast to shallow cover.  Take the time to put your baits quietly where the bass don’t see many, and these pros guarantee it will improve your fishing. 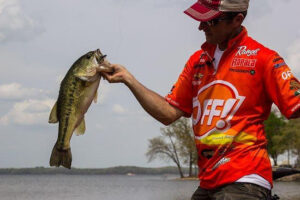