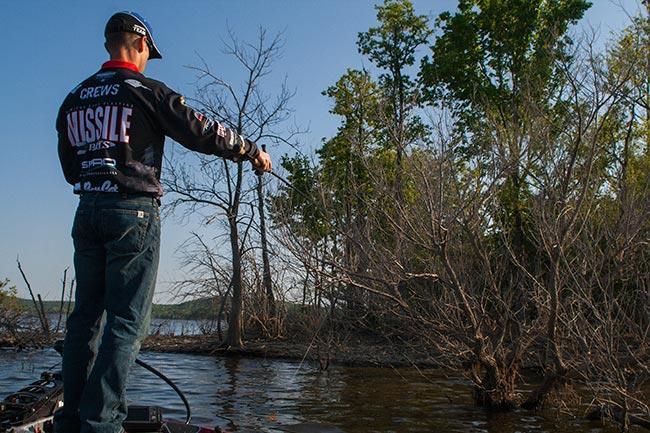 Water surges and sprays out from the branches. The bush shakes and rattles as if two beavers were fighting over it. The braid pings and plucks like a guitar string under the strain of a huge bass being wrestled out of the shallow cover. There’s an adrenaline rush that comes with close quarters combat and fishing skinny water. The bass has nowhere to go but up … and stark raving mad upon being hooked in the mouth.

We love to fish shallow, but it seems like many lakes only allow for shallow fishing for a very small window. But what we’ve learned over the years visiting hundreds of fisheries is that there are bass shallow all year. In the coldest of water to the sweltering heat of midsummer in the south we’ve found sizeable bass feeding in shallow water. The fact is not all bass make the same migrations and often as bass grow larger they break away from the groups and take up residence in much smaller zones.

There are windows in the midsummer where a bunch of bass suddenly seem to “reappear” in shallow water. There is probably some scientific explanation as to oxygen content, forage movements, current and new vegetation, etc. As an angler it’s nice to understand these things to better “predict” behavior and pattern bass. But it’s more important to know that these things do in fact happen.

The other part of the equation is there are just bass that live shallow. Sure there may be much larger and better populations of bass migrating offshore and staying in the cooler deeper waters but being savvy about location and approach will yield shallow water success. Look at guys like George Cochran and younger anglers like Ott Defoe who have literally carved names for themselves in professional fishing with a “stick shallow” mind frame.

That’s not to say an angler will go fish shallow in 100 degree temperatures and catch fish like Defoe and Cochran do. These guys have spent decades learning where to look, learning how to approach shallow fish and how to get their baits in places most others haven’t quite made it.

Current. Shade. Cover. Forage — four  variables you should always be looking for in shallow water. Current and shade will keep the water comfortable enough for bass to stay shallow. While cover and forage are the dinner table and the dinner. A bass is hanging out just trying to beat the heat in his cool crib with a little breeze (current) blowing on him. Then a Big Mac comes swimming by and suddenly he’s got an impulse for a big hamburger (shad) in cool crib on a summer day.

Obviously different scenarios offer some good shallow fishing in the summer. It can be a shady bank with over hanging trees, a row of docks shading the waters below, or a current break that has cooler water running by making an ambush point for the bass. But maybe the most effective shallow cover is grass. Hydrilla, coontail, milfoil, pencil reeds and other forms of aquatic vegetation grow, canopy up and offer bass a shallow, shaded area to feed.

Another place where shallow fishing can get real good in the hot days of the year is where fresh rains are running into the lake. Often it gets much cooler when it rains and the water dumping into the lake can be a lot cooler than the water around it and that often has a tendency to congregate forage and create  a new feeding zone.

We’ve had some banner days fishing runoff areas after substantial rains in the summer. A lot of times the lake level will rise and there will be some new shallow cover and lots of new food washed into the water to attract forage and predators alike.

Probably one of the best approaches though is to find areas where the water necks down and the bass have little option other than feeding shallow. The backs of long creeks, way up a river on an impoundment, or just a narrower section of a body of water can make finding shallow bass a lot easier. Sure you can find shallow bass in other places, but when you limit the options, narrow the search area and put more of the odds in your favor, finding the bass gets a lot faster and a lot easier.

Sometimes finding those shallow cover laden areas right on the edges of deep water can be the ticket. The bass may sit out deep and when they feel like a little snack, the turn and run up to the kitchen (shallow cover) and grab themselves a snack.

Water clarity can determine the approach to fishing shallow water bass in the dog days of summer.  Clear shallow water often dictates a stealthy finesse approach where muddy, dirty skinny water leads to more reaction oriented bass. Sometimes it’s a mix of things. But one thing that is for certain, is fishing shallow targets requires pinpoint accuracy and an attention to quiet entry landing beyond where you think the bass might be and sneaking into his zone. Or sometimes it’s putting it quietly right on his head.

Several lures will work for shallow bass but we’ve found a few especially effective for snaring bass out of inches of water. A soft plastic pitch bait is hard to beat for isolated pieces of cover. Depending on water clarity, we’ll often go with a 3/8 ounce Eco Pro tungsten bullet weight, a 4/0 or 5/0 straight-shank Grip Pin Extreme Mustad hook and one of our favorite plastic flipping baits like a Zoom Brush Hog, Strike King Rage Craw, Reaction Innovations Sweet Beaver, or Berkley Havoc Pit Boss.

We’ll move stealthily with the trolling motor on 20 or 30 and pitch quietly into bass holding cover. Line size should still be pretty significant if the cover is heavy, even if the water is clear. The thicker the cover the more it masks your line. 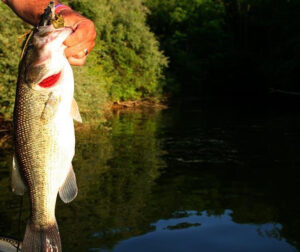 If that’s not working, we’ll work a hollow-bodied frog around. A frog can be thrown up on the bank and just eased it into the water without it hanging most of the time. Anglers can be real crafty with a frog. Fire it way up under over hangs and cover that blocks most presentations.  You can skip it under and around things you normally wouldn’t throw other lures over and around. But best of all, it just flat catches big ones. I stick with proven frogs like Spro and Snagproof most of the times. But there are a lot of new frogs on the market like Booyah Pad Crasher, Jackall Iobee and Koppers Live Target frogs that look good too.

There are always times when a square-billed crankbait or a spinnerbait are going to work well, but a swim jig gets overlooked. What I like about a swim jig in shallow water is that you can wind the bait at a screaming pace and bulge a little water and really get a bass to react. You can wind it faster than a crankbait or a spinnerbait because of their resistance and in shallow hot weather, that screaming pace can be an unbelievable attractor for big bass. A big 6-pound bass can swim a lot faster than we give them credit for and speed is often a characteristic of forage that often wills bass to bite. They see a baitfish running for its life and they just nail it.

I like a swim jig with a planing surface like the Booyah Swim Jig or the All-Terrain Swim jig most of the time but will change up to a Boss Swim Jig or a Taylor Man’s Swim Jig if I’m pulling it through vegetation. I put a bulky trailer on it like a chunk or a craw when I want to imitate bluegills or something like a Zoom Swimming Fluke when I want it to mimic a shad more.

If the water is clear, a floating wacky rigged worm can be absolutely deadly. I’ll take a Zoom Trick Worm and rig it on an Eagle Claw Wide Gap Wacky Hook with a split ring to hold the hook on the worm a little better, rigged wacky right through the middle of the worm. Then just skip it around twitch next to cover where bass can hide. It’s deadly around docks, stumps, bushes and other shallow cover when the water is a little too clear for bigger bulkier baits.

Fishing shallow is about stealth and opportunity. Don’t waste time seining banks until you get a bite or two. Move fast, hitting the obvious stuff while focusing on putting your lures where you think others haven’t reached. Often it’s just about putting the bait on the nose of the bass where they’ve not seen one. Get off the beaten path and find that skinny water way up the river and seek out the likely ambush or current and shade cooled banks to increase the odds.

We all love to fish shallow, and in the summer it might just be the way to find fish all the others have missed.