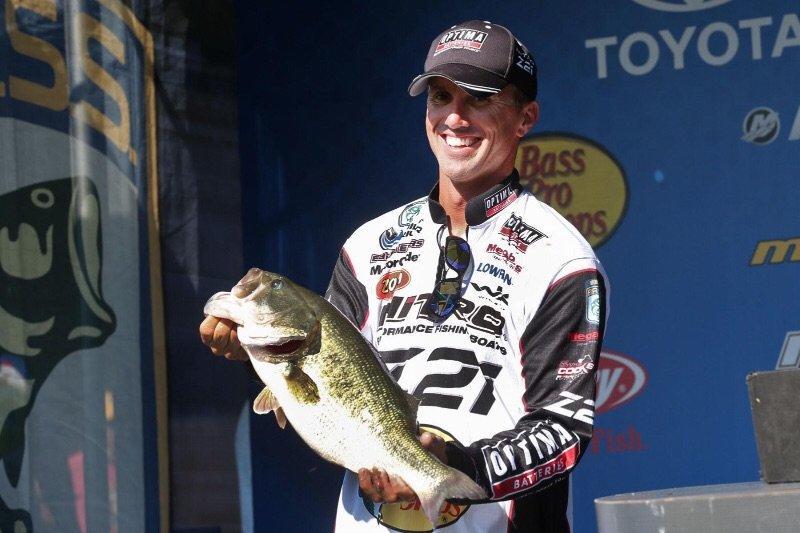 Oklahoma pro Edwin Evers got the kind of bite Thursday that helps a professional angler separate himself from the field in a tournament like Zippo BASSfest at Kentucky Lake presented by A.R.E. Truck Caps.

But when the mammoth 8-pound largemouth first bit, he wasn’t sure what he had.

“I set the hook on that thing, and I thought I had the bottom,” Evers said. “It was a really cool bite. I didn’t think she would weigh that much, but she was solid.”

The big fish of the day helped Evers put together a five-bass limit that weighed 27 pounds, 2 ounces and pushed him into the lead with a two-day total of 51-2. Michigan superstar Kevin VanDam is second with 47-14, while Alabama pros Derek Remitz and Tim Horton are next with 47-4 each.

Evers’ 8-pounder was the biggest fish of the day and the biggest of the event so far. The fish also helped him claim the $2,000 Rigid Industries big-bass jackpot.

Also as the leader on the second day of the tournament, Evers will be awarded the Livingston Lures Leader Award of $500.

“I caught that fish from a spot where I had already caught several,” Evers said. “It was mixed in with a bunch of fish, but they weren’t all 8 pounds, like that one.”

Unlike Wednesday, when Evers caught most of his 24-pound limit before 10 a.m., it took a while for him to land the five fish he eventually weighed in Thursday. But once he felt he had enough fish in the livewell, he did some looking around and found good reasons to be excited about the next round.

“I feel great about Saturday,” Evers said. “I found another school today that I’m pretty excited about. I made two casts and caught two giants.”

Evers holds more than a 3-pound lead over VanDam, who came back to the weigh-in site almost two hours early Thursday with a five-fish limit that weighed 24-5. Anglers are allowed to weigh their catch early when they’re concerned the fish may die, and VanDam had at least one fish he said was laboring.

The loss of fishing time didn’t hurt him — even though his bites came slower Thursday than they did on Day 1.

“You just never know on this lake,” VanDam said. “There was a lot less current today, so it didn’t happen as fast for me. I have no idea what’ll happen going forward, but I’ve had two solid days.”

Despite the smaller pro field Saturday, VanDam said heavy local boat traffic could be a factor.

“Saturday is a really challenging time on a lake like Kentucky Lake,” VanDam said. “Electronics are so good now that a lot of people know where to fish. You just have to do the best you can.”

The biggest bag of the day – five fish that weighed 28-1 – belonged to Remitz, who is establishing himself as one of the tougher anglers to beat on Tennessee River lakes. After finishing in third place at Lake Guntersville in April, Remitz is in third again, less than 4 pounds out of the lead.

One of Remitz’s largest fish weighed just over 6 pounds and didn’t give up easily.

“The fish just had one hook in the corner of its mouth,” Remitz said. “I couldn’t really get my hand in its mouth, so I just tried to scoop it into the boat. I had him against the boat with one arm, and the hook came out of his mouth. I just used my other hand and dumped him in the boat.

“When that happens and you still land the fish, you know it’s going to be your day.”