They’re not exactly built for busting topwater baits, but don’t say that to a redfish. Despite their downward angled mouths made for bottom grazing, the bronze brutes readily feed higher in the water column. So, yes, fishing for redfish with topwaters is a reality.

A motivated redfish can deliver one of the most exhilarating topwater attacks you’ll ever see. A big part of that is simply the angle of attack. By comparison, speckled trout, snook and any fish with a forward-facing mouth can attack from directly below a topwater bait and blow a hole in the water.

Redfish, on the other hand, have to get a running start, rise up and overtake the plug in a top-down attack. It looks like a submarine surfacing and when multiple fish go after the same bait, it’s a real blood-pumper.

Standard walking style topwaters like the Rapala Skitterwalk, MirrOlure Top Dog, Live Target Mullet and Heddon’s Saltwater Spook will cover most applications, but don’t hesitate to try a wake bait or even a popping plug. On a particularly memorable morning in Buras, La., Live Target’s Gary Abernathy tossed one of his Bait Ball Series Glass Minnow Poppers and a plump 25-pounder choked it so deeply we thought we’d have to come in through the basement to get it.

Typically, the redfish topwater bite starts to taper by late fall, but this year’s different. Florida Keys guide Capt. Travis Holleman, who spends about two months a year guiding for reds on the Mississippi Delta said he expects the epic topwater bite he enjoyed this fall to continue – compliments of El Niño’s ocean warming.

“I pretty much throw topwaters when redfish are busting bait on top from September through November, but this year’s El Niño has definitely extended the top bite,” Holleman said. “The warm west winds and mild temperatures delayed the sea surface temperature drop. That keeps the fish active on the fall pattern longer than normal.” As fall cold fronts start marching through the Gulf of Mexico and southern Atlantic Seaboard where the majority of inshore redfish action occurs, you can expect fluctuations in the topwater bite. The fish will be less likely to feed on top during the high pressure bluebird conditions following a front’s passage, but ahead of the cold air, the cloudy skies and falling barometer often triggers a beastly feed.

This Redfish choked the LiveTarget Mullet topwater bait / Photo by David A. Brown

Redfish are gluttons, so they’ll follow schools of menhaden, pilchards (whitebait) and threadfin herring (greenbacks) as long as they tarry. Finger mullet, a hardier forage source is one of the top fall-winter meals, so take their presence as a sign of topwater potential.

You don’t want to spook the little guys, so cast beyond them and walk your bait into the neighborhood. Keeping outside the school makes your bait look vulnerable and typically finds a taker. Needless to say, if you see finger mullet “showering,” they’re under attack and all bets are off.

Fire at will and you’ll likely experience instant aggression. If not, dead stick your bait to mimic a wounded or killed mullet. Give it a few seconds and then gradually twitch it into motion. Any redfish that spots this easy prey will drop the hammer.

On the grander scale, large herds of adult mullet offer an even better opportunity. First, these vegetarians kick up lots of crabs and shrimp that freeloading reds gladly gobble.

More strategically, the constant motion and frequent splashing common to a mullet school often suppresses the topwater’s splashdown and thereby allows you to get away with casts that might otherwise send the school packing.

Take advantage of mullet massing and work the surface with plugs or soft plastic jerkbaits twitched across the top. Just don’t plunk the baits dead center in the mullet school. These high-strung fish startle easily and if they bolt, so do the reds.

Louisiana guide David Iverson always keeps a topwater on deck so he never misses an opportunity digging or rigging. That being said, he knows the surface deal may not always be right. Watching for fish cues tells him when to float one.

“For example, if you’re throwing a Bomber Saltwater Grade Paradise Popper XTreme, and they start hitting at the cork, you need to pull that popping cork in and put on a topwater.” 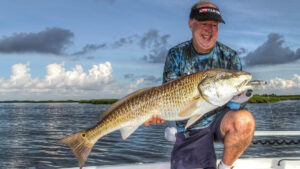 With clearing winter water comes heightened redfish apprehension, so don’t be surprised if those full-sized baits enjoy shrinking windows of opportunity. If the fish snub the bigger topwaters, downsize your bait selection and show them a less intrusive profile. For example, swap that 3-hook Super Spook for a 2-hook Super Spook Jr.

Case in point: During a cool, clear winter day in Pine Island Sound on Florida’s southwest coast, Capt. John Ochs led our group to a mix of trout and redfish over grass flats with occasional oyster bars. Our larger topwaters like the MirrOlure Top Dog and She Dog worked well in the earlier hours, but Ochs noted their waning popularity as the morning grew late.

Holleman offers another tip: “The kicker for Southwest Florida is a topwater with no (rattle). Drill a hole in your favorite rattling topwater and drop epoxy onto the rattle ball and seal back up. Fish don’t spoil from a silent topwater in pressured areas.”