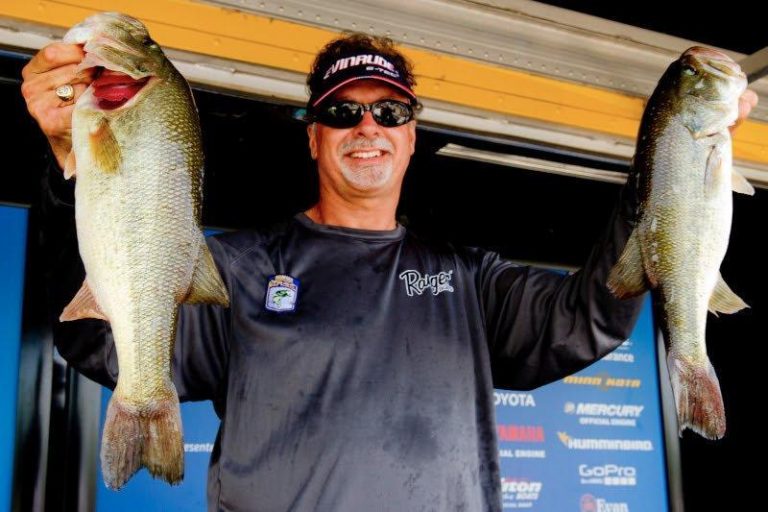 Dillow added 12 pounds, 13 ounces to the 18-13 he caught yesterday and now leads Duckett by 2-7 heading into the final day of competition.

“I did the same thing as yesterday,” Dillow said. “And I’m not going to change anything tomorrow. I’m going to run the same water and keep my homemade jig in my hand.”

The remainder of the Top 12 pro field is comprised mostly of full-time pros, including two Bassmaster Classic winners, Duckett and Mike Iaconelli, but Dillow said he’s not intimidated. “I’ve beaten them before,” he stated. “At the same time, I’m humbled to be on the same stage as those guys.”

Thursday’s opening round saw four limits weighing more than 17 pounds, but today there were none. Matt Vermilyea of Ohio weighed in the day’s best, 16-9, to jump up from 91st place and claim the last spot in the Top 12. No one has weighed in more than 14 pounds both days. Third-place pro Michael Simonton of Ohio came the closest, producing 14-14 on Day 1 and 13-10 today. Eight of Thursday’s Top 12 remain in the hunt, but many seemed flummoxed by a tidal system they thought they understood.

Perhaps no one was more hurt by the tide — or lack thereof — than Duckett, the 2007 Bassmaster Classic winner, whose 8-15 Day 2 catch was less than half of what he weighed in on Day 1.

“We had a really weird tide today,” he said. “It was almost like we didn’t have one. It came up real slow and we never had current. The tide never did anything.”

He remained in his primary area until 11:30 a.m. without catching a keeper and then scrambled up the river to sack a small limit. Despite today’s struggles, he plans to start downriver again Saturday. “Big fish live there,” he said. “It doesn’t matter if I finish fifth or 12th. I’m not fishing this for points.”

Like Duckett, Pennsylvania pro Dave Lefebre slipped down the leaderboard, in his case from third to fifth, also catching less than half of his first-day weight. He only weighed in three fish, two short of his limit, and now sits a bit over 4 pounds out of the lead.

“I need 10 bites to catch five fish,” Lefebre said. “I only had seven today. I have a big fish deal going, and I got three bites on it yesterday and only one today. I’ll follow that all day tomorrow.”

Iaconelli’s Day 2 catch didn’t fall into the single digits, but the 11-3 he weighed in, combined with his 15-9 from yesterday, enabled him to hold down eighth. Like many of the others, Iaconelli observed that the tide didn’t move as expected, but he couldn’t quite explain why.

“It was a little behind,” he said. “You can’t predict that. On the Delaware River, sometimes “something in the ocean, 350 miles away, causes a big impact.” He said that fishing pressure in fragile areas is also likely making fishing tough.

“More than anything, it’s guys moving around,” he stated. “That stirs the banks up and the muddy water from the wash shuts them down, even if you have the right tide.”

Unless local fishing pressure increases on the final day of competition Saturday, the remaining dozen pros and an equal number of co-anglers should have a bit more breathing room. Regardless of whether the tide moves as planned, a winner will be crowned in the afternoon.

In the co-angler division, Louis Britos of Disputanta, Va., caught a limit that weighed 6-5, far short of the 12-7 that put him in the lead on Day 1, but it was enough to hold onto first place with a lead of 2-6. For leading after Day 2, he earns the $250 Livingston Lure Pack.

Fort Worth, Texas, pro Trait Crist caught an 8-pound largemouth to take over the Bass Pro Shops Big Bass of the tournament lead on the pro side. If that fish holds up through tomorrow’s final weigh in Crist will win $750. She fooled the big bass with a black grape finesse worm fished on a Slider Head. The 7-2 largemouth that Britos weighed in on Day 1 remains the heaviest bass caught on the co-angler side. If it is not surpassed tomorrow, he will win $250.

Chris Flint of Potsdam, N.Y., recovered from a bad first day to win the Allstate Good Hands, Great Day award of $250 for moving from 136th place to 52nd thanks to a 14-pound limit.

Among co-anglers, Matt Madlener of Lake Villa, Ill., moved from 125th to 10th place to garner $150 from Allstate.