No fisherman enjoys getting stumped – unless, of course, that stump is the target you’re fishing – and home to a big, green, line-stretching bass. Remnants of fallen or hewn trees, stumps provide the cover and shade that make bass feel comfy and cozy. They also offer particular benefits for two of nature’s basic drivers – reproduction and feeding. And fishing stumps for big bass is an easy technique for anglers to learn.

For clarity and ease of explanation, let’s lump shallow fields of weathered timber into this discussion, as the principles of fish attraction and angler presentation have sufficient overlap. As FLW Tour pro Jay Yelas points out, a lot of the older reservoirs have seen their shallower timber eroded by years of wind and waves, which flooded trees to little more than glorified stumps anyway.

Deep standing timber, in 30-plus feet of water – now that’s a different deal. But for now, we’ll stick to the relatively shallow stuff.

SEASONS ON THE STUMP

Yelas has seen plenty of stumps over the course of his career, and, while he recognizes the visual reference value for anglers, he knows that bass take a more practical approach.

“The bass use the stumps and tress to suit their seasonal needs,” Yelas said. “If they’re spawning, they’ll get up next to a stump in 2-3 feet of water. The rest of the year, they’re going to be interested in the baitfish. Anytime they bait fish are near (wood), the bass use that cover to ambush the bait.”

Yelas said stumps can be good most any time of year; it just depends on the season and what the fish are doing. Winter’s typically pretty lean on the stumps, but spring through fall finds consistent opportunities of various making.

Here’s how the pro from Corvalis, Ore. breaks it down:

Spring: “When you have stumps in the shallows, the fish will move in there and spawn around the base of those stumps. It can be submerged stumps or trees that are still (partially) standing.

“That’s when you can catch them by pitching Senkos or on a squarebill crankbait, or even a spinnerbait on a cloudy day.”

Postspawn: “After the fish spawn, they typically move out to creek channels and use those as their migratory routes. Any trees or stumps along the edge of that channel can be really good. That’s when you’d use crankbaits, swimbaits, maybe a big worm.”

Summer: “This time of year, it’s all about the baitfish. Typically, they move out to the main lake and the main river channel in the summertime. Some of the bait will stay in the creeks, but they’ll be on the main creek channel.

“The bass don’t move to those areas because there are trees or stumps there, they move there because they’re following the baitfish. They’ll use the timber as ambush spots. They’ll wait for a school of shad to swim by and they’ll run out there and grab a bite to eat.”

Fall: “When the shad migrate to the backs of creeks, the bass will follow them back there. And if the lakes are low, a lot of times, the bass will hang out by the creek channels because of the depth they provide and the timber and stumps that are there. A jig, a big worm and deeper diving squarebill crankbaits can be good.”

Whatever season in which he’s fishing stumps, Yelas bases his casting angles on sky conditions.

“Any sort of hard cover is usually better when it’s sunny out because it pulls the fish right in there tight into the shade,” he said. “In these conditions, you have to make a presentation closer.

“But on a cloudy day, or early and late in the day, the fish will be near the cover, but relating to it more loosely. They might hit a topwater bait, or a crankbait or a swimbait or a jerkbait. They might come out more to get a bait. So I treat it just like a shallow laydowns or brush piles. If it’s sunny, you have to go right in the shade to get ‘em and if it’s cloudy, they’ll come out and chase stuff.” 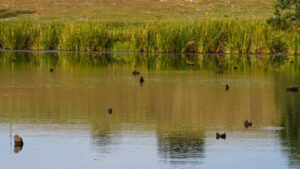 Bigger wood equals bigger fish: “Big bass love big pieces of wood,” Yelas said. “If you’re in a (stump field or flooded timber) and you have a lot of different sizes of timber around, the bigger trees are going to be your key targets. So you can sort through what’s available and pick out the bigger ones.”

Know what’s below: Be it channel bends or points, bass relate to bottom contour first and then position on available cover. Stumps are prime positions from which bass can ambush the baitfish that’ll also utilize various contour features.

“You might be going down the lake and see a whole forest of trees in 30-50 feet of water, but some of them are right on top of a long flat point in 10 feet of water,” Yelas said. “The trees on top of that long, flat point that sticks out into the main lake are the ones you want to target most often.

“The fish they like to feed on top of points and drop-offs. They’re up there to feed and they use those trees as ambush points. The bottom contour of the lake and the bait is what they’re relating to.” 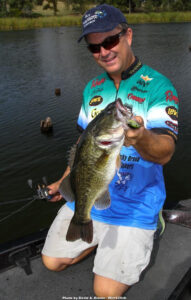 Notwithstanding his openness to those big worms, spinnerbaits and topwaters that occasionally tempt his stump fish, Yelas has a trio of tried-and-trues that he knows will get the job done. Topping his arsenal are:

Jigs: Yelas likes a 3/8- to a 1-ounce Yamamoto Flippin’ jig, with size depending on depth and wind. Black and blue is his favorite color for the jig and the Yamamoto Flappin’ Hog trailer.

“I like the Senko around stumps when the fish are shallow, like in the spring time,” he said. “I don’t fish this bait around stumps often, but when they’re up there in that spawning mode, you can’t beat pitching a weightless Senko right along the edge of the stump.”

Crankbaits: Favoring the Yamamoto Chikara, Yelas opts for the 200 and 300 series baits which reach 8 and 10 feet, respectively. This range, he said, fits the seasons in which stump cranking best fits the bill.

“Cranking stumps is a great way to catch bass in the summer and the fall when they’re on baitfish,” he said. “I like these crankbaits in a shad pattern or the black/chartreuse.”

Yelas fishes his Senkos and crankbaits on a 6.4:1 Team Lew’s reel spooled with 20-pound fluorocarbon. He’ll step up to a 7:1 reel packing 50- to 65-pound braid for the jig work. He’ll also challenge those jig fish with a 7-foot, 6-inch extra-heavy power Kistler flipping stick, as most of his bites will come right next to the cover, where jigging allows a slim margin of error.

As Yelas observed, stump fish have a propensity to make life, at best – interesting; at worst – devastating.

“You gotta be able to get them in the boat,” he said. “Those big ones will wrap you up and you’ll get your heart broken.”