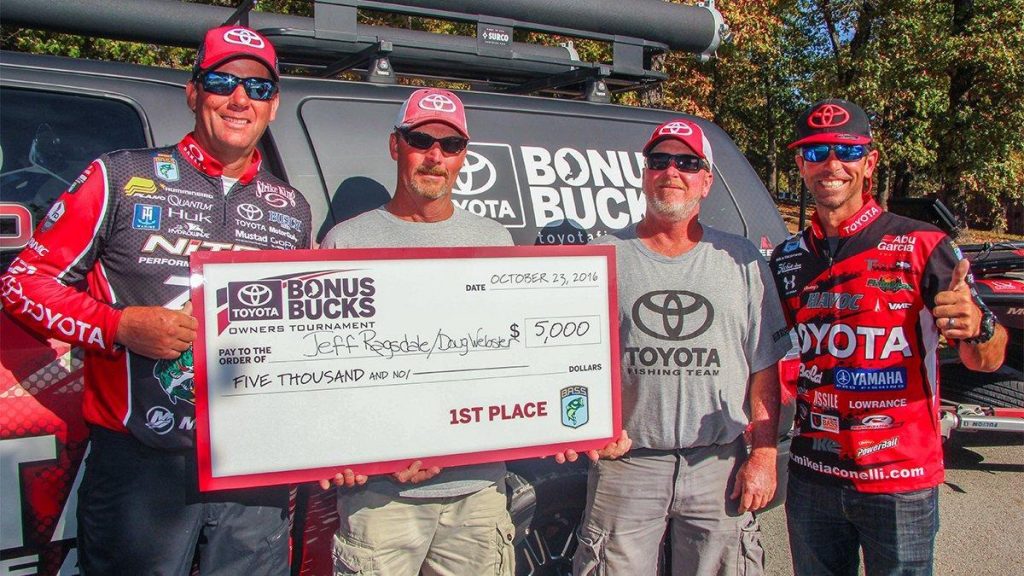 Of the 143 teams that signed up for the 5th Annual Toyota Bonus Bucks tournament and traveled from an amazing 27 different states to Table Rock Lake, it was the team of Jeff Ragsdale and Doug Webster of Birmingham, AL that took home the win on a beautiful but very tough day of fishing in The Ozarks.

Their weight of 14 pounds, 10 ounces was enough to take home the $5,000 first-place prize from the no entry fee tournament, in which just one teammate has to be registered for Bonus Bucks. In Ragsdale and Webster’s case, they’re both proud Tundra owners and Bonus Bucks members.

Webster, a diesel engine mechanic, explained that most of their winning weight came in a 30-minute flurry on a Carolina-rigged Lake Fork Ring Fry in about 12 feet of water.

When Ragsdale was asked what he liked most about his Tundra, he said, “I was a Chevy guy until 2010 when I bought my first Tundra, and Toyotas just last longer, so I bought my second Tundra last year.”

The top 30 teams got a paycheck in the no entry fee event. Plus, three randomly drawn teams received a check for $500. The 15th place team took home a $1,000 Bass Pro Shops gift card.

Certainly, nobody went home empty handed. Participants who traveled from states across America were treated to free meals, a generous amount of free clothing and hats and tremendous fellowship before the first cast was ever made.