When it comes to tackle tinkering, few anglers are more obsessed with making subtle changes and testing the results than professional angler Terry Scroggins. “Big Show” builds his own Mud Hole Custom fishing rods, his own jigs or shaky heads and home pours many of the soft-plastic lures he uses at the professional level.

More than his homemade equipment, the Team Toyota pro regularly tinkers with existing lures to give them a unique action and show bass something they have never seen.

At a recent media outing in Alabama, Scroggins offered one of his all time favorite tackle modifications—changing the action of soft plastics with a .22 rifle shell. 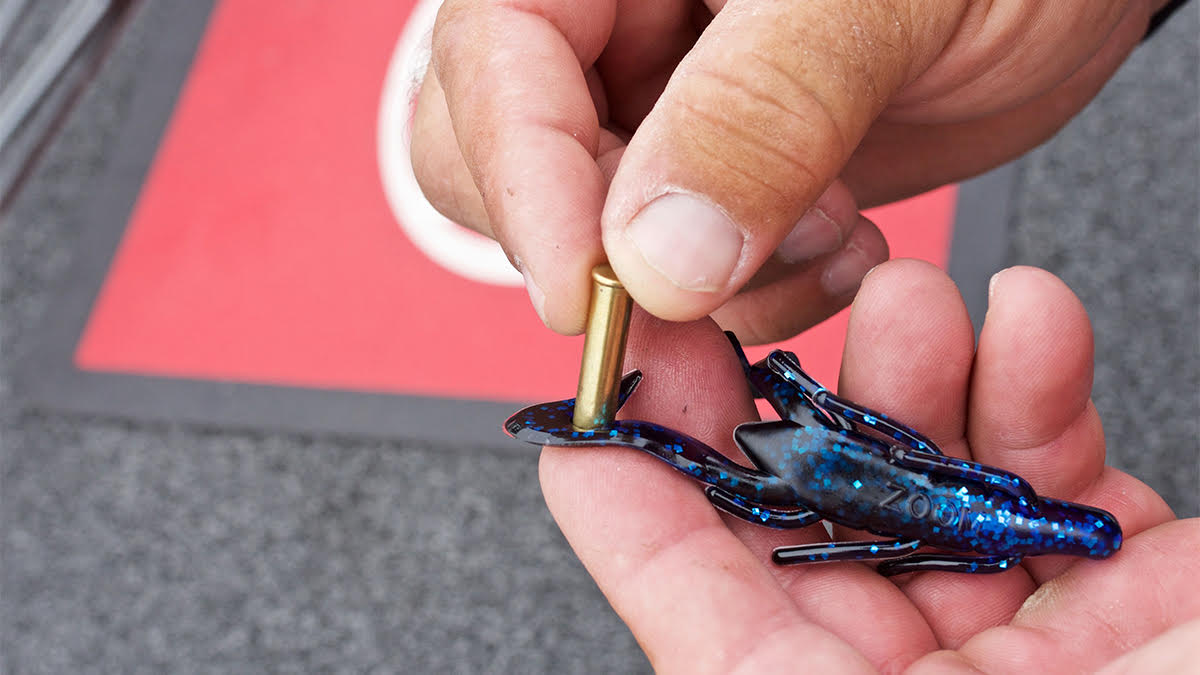 Fortunately for his neighbors, Scroggins isn’t lining up soft-plastic baits and actually shooting at them. Instead, Scroggins keeps a few .22 caliber casings in his boat and uses them to punch out small areas of plastic on certain lures.

“I always keep a few stray .22 shells in the boat just in case I want to add a little action to a soft plastic,” Scroggins explained. “You can also use a straw but they won’t last as long and for whatever reason are easier for me to lose. The same .22 shells have been riding around in my Triton cup holder all year long.”

Pictured here is a Zoom Ultravibe Speed Craw, but Scroggins has used this trick on a myriad of different baits. This includes Zoom Ultravibe Speed Worms, several baits in the Strike King Rage line of products, YUM Thumpin Dingers or Spine Craws and several homemade baits he pours.

Scroggins said you could try removing plastic with a .22 shell on any soft plastic lure, but he’s found it’s most effective on baits that have a tight turn to their flapping appendages, like the aforementioned products. Scroggins uses a .22 casing to remove a circular chunk of plastic from the inside turn of the appendage he is modifying.

You run the risk of ruining a few baits the first time you try this at home, as there seems to be a sweet spot for removing the small bit of plastic to receive the intended change in action. But for the most part, this process is extremely easy and you can check your work by swimming your modified lure next to one right out of the package. You should be able to see a noticeable difference.

“All this trick is doing is opening up the plastic a little and letting these baits catch water a little easier,” Scroggins said. “It allows you to work the bait at a slower speed but still get an enticing action from the craws or the tail of a worm. It’s subtle but you might be shocked at how big of a difference it can make to the fish.”

I experienced just how effective this sly adjustment can be with Scroggins a few years ago on Table Rock Lake. We were throwing shaky heads with one of his home poured worms and like usual, Scroggins was getting three bites to every one me and a second angler in the boat were receiving. We noticed Scroggins was sitting down to tinker with each new worm he put on. After some questioning, he hesitantly showed us his .22 shell trick.

I was dumbfounded. Could that small of a change really make such a big difference to the bass? We were skeptical and stubborn to make the change but after Scroggins put another five or six fish in the boat in short order, we both were scouring the bottom of his boat for a .22 shell. It was eye opening. 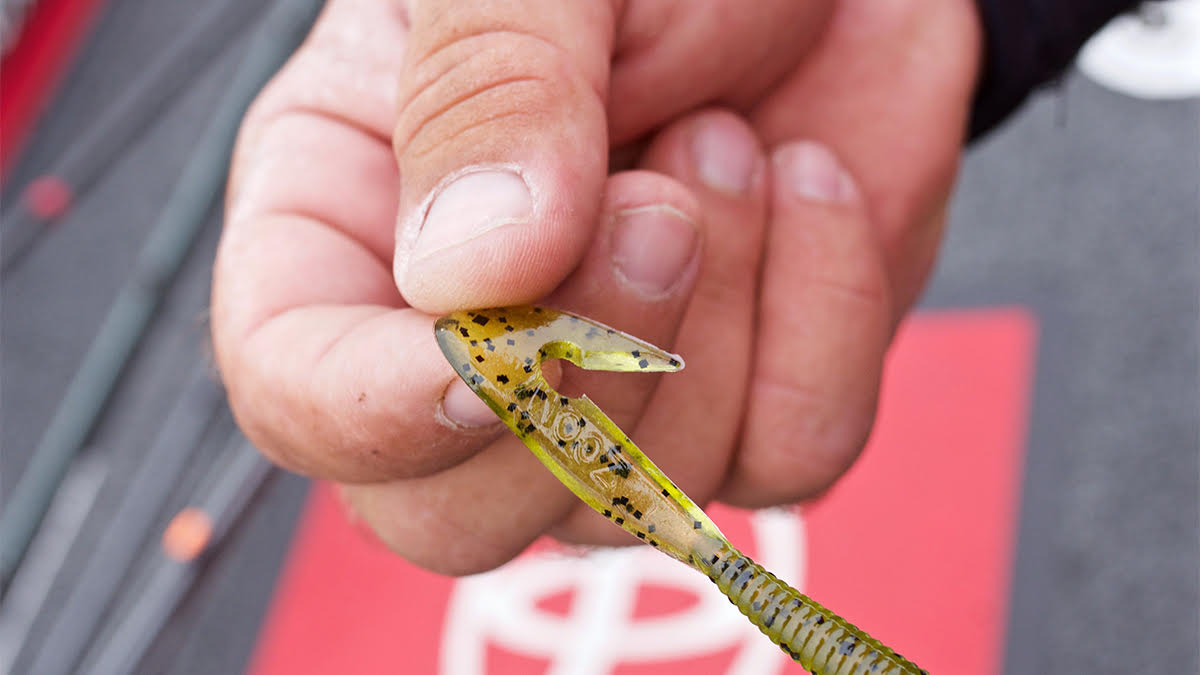 Scroggins came upon this modification one day when he was trying to find a worm he could swim at super slow speeds for a local tournament on the St Johns River. He was working with different worms, tearing out pieces of soft plastic and testing them in his swimming pool, which serves as Scroggins’ at-home test tank.

When he saw the action produced by a slightly modified Speed Worm, Scroggins knew he was on to something. Not only did Scroggins find the desired action he was searching for to slowly swim a worm that weekend, but he also found a new trick to show bass something they hadn’t quite seen before.

“The action on a Speed Worm is great right out of the package but sometimes it’s best to show fish something different,” Scroggins said. “I’ve used this trick on worms to catch largemouth around Florida and Carolina-rigged craws to catch big smallmouth all the way up in New York. With more fishing pressure than ever these days, anything you can do to set your bait apart can get you more bites.”

This tackle alteration is situational. Scroggins has found it to work best in clear-water scenarios, in steady current and when he is fishing a bottom-bouncing bait like a Carolina rig, shaky head, wobble head or Texas rig. As this subtle change helps him get more action out of his lure even when worked at super slow speeds.

Give Scroggins’ .22-shell modification a try while you’re organizing tackle in your garage this winter or the next time you want to show bass a different look. Albeit subtle, this tweak can help you get more bites and catch more fish.

Furthermore, don’t be afraid to take a page out of Scroggins book and tinker with your tackle stockpile. You never know, you may stumble into a slight change that results in a new technique or a more effective lure you can show the bass in your area. 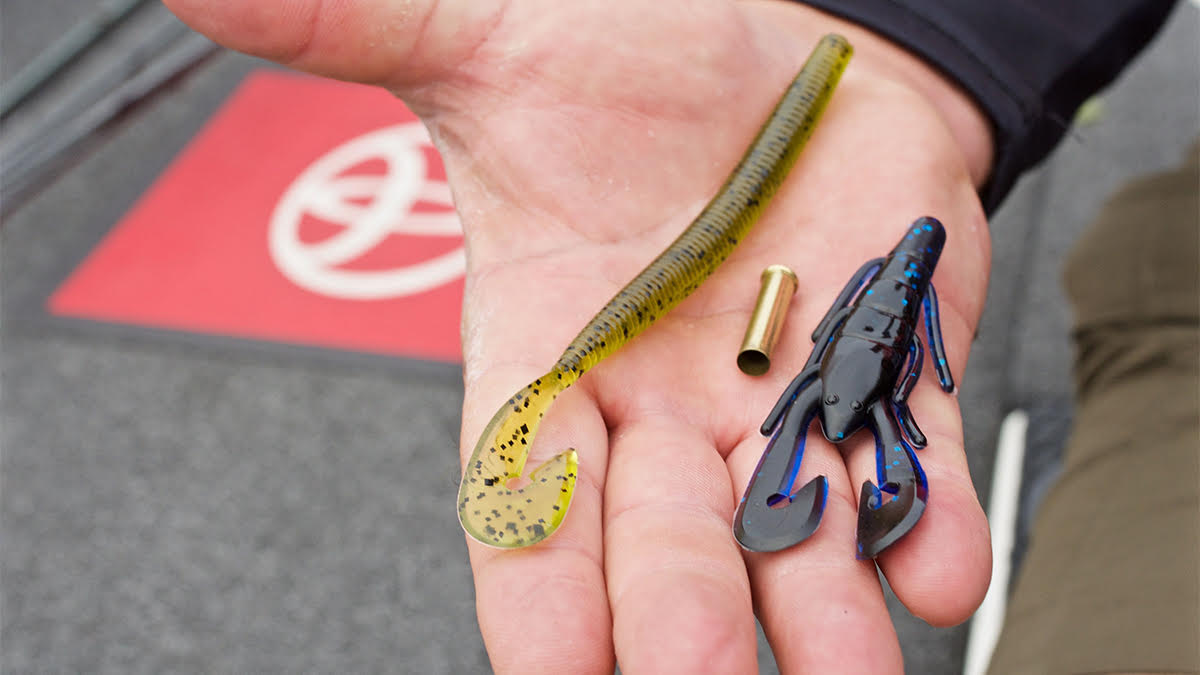