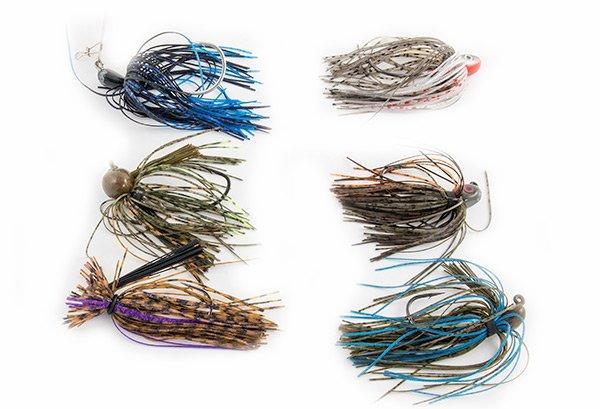 Meant to mimic a crawfish in its original design, a skirted jig has morphed into a broad category of lead headed bass lures that can mimic crawfish, shad, bluegill and just about anything a bass will eat. A jig truly is a versatile lure, one of the most versatile in an bass angler’s tackle box. Here is a quick guide to skirted jigs for bass fishing.

Parts of a jig

A jig is essentially a lead head molded on a hook, with a silicon, rubber or hair skirt affixed around the collar of the jighead with a rubber band or tied with wire or thread. The jigs come in different shaped heads for different applications. The jig is almost always fished with a trailer of some sort. The hooks will vary depending on what you want to fish. They might be light wire with small round bends or heavy wire for horsing fish out of cover. Most skirted jigs feature a fiber weed guard that acts as deflector for the hook point to keep it from snagging on wood, grass or other cover. It’s not completely snag proof but it’s very efficient at keeping the jig coming through cover without getting hung.

A jig can be flipped into heavy cover or swam rapidly just under the surface to mimic a fleeing baitfish. You can crawl it on the bottom in deep water to mimic a crawfish. You can hop it like a crawfish or baitfish being startled by a predator. You can work it down a slope, crawl it over cover, skip it under docks, punch it through matted vegetation, cast it to rocks, swim it through grass and otherwise pick apart areas fast or slow, shallow or deep.

Basically skirted jigs are divided up in the following categories: 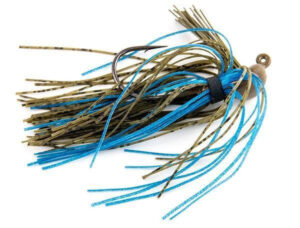 A big hook and an Arky style head which is sort of a flat banana shaped profile and a heavy weed guard is what you’ll find on most flipping jigs. Arkie Jigs is credited for creating the first true flipping jig. Although grass jigs take on a more streamline profile so they are able to knife through the cover easily. These jigs are made for piercing heavy cover to get your lure in the bass’s hiding spot and tempt them into striking. You generally want to use heavy line and a heavy power rod when fishing flipping jigs around shallow cover. You have to set the took amidst a ton of obstacles, turn the fish’s head and wrench them out of the cover and into open water in an instant. Thing line or a soft rod will make this task a lot harder. 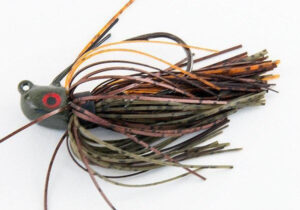 These jigs are often marked by a small head design, and small usually light wire hooks. The purpose of these jigs is for casting and working a jig back along sloping or do-nothing banks. They are especially effective on clear highland impoundments but they excel on any fishery where the cover is sparse and mostly rock. Typically you fish them on smaller diameter line for better casting and sensitivity. It’s great in clear water and cold water. Especially on lakes with spotted bass and smallmouth bass. 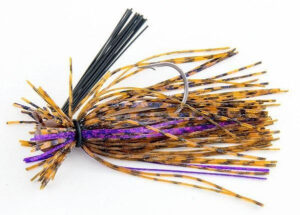 Like the casting jigs, finesse jigs are small ballhead jigheads with usually spider cut skirts (short flared skirt around the collar of the jig) and grew in popularity on highland reservoirs like Lake of the Ozarks, Table Rock Lake other clearwater impoundments where spotted bass and largemouth often relate to bluff rock and manmade cover. The jigs basically range in size from 1/8 ounce to 3/8 ounce in weight. The Eakins Jig is credits as being the first finesse ballhead jig for bass fishing and was made famous by Jim and Troy Eakins who won a lot of money fishing bass tournaments on Missouri and Arkansas lakes flipping boat docks and casting to rocky banks on ultra-clearwater reservoirs. 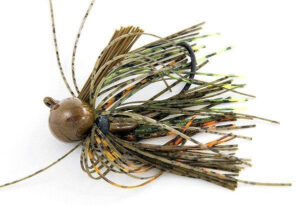 These jigs have dominated professional fishing for the last decade because of their effectiveness at catching bass in deep water. The football shape of the head arranged perpendicular to the hook allows this jig to come over rock bottoms easily. A football jig is not as snag resistant as the other skirted jigs, mostly because you are usually fishing one that weighs between 1/2 and 1 ounce in deep water. But they are very effective when drug along rocks and shells on river or creek channel ledge in search of schools of offshore bass. 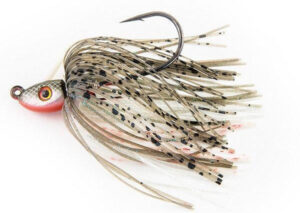 Swim jigs have morphed into one of the more popular varieties of jigs in recent years. These gained popularity somewhat by chance when anglers started realizing they were catching big bass when flipping when they would reel up their jig real fast to make another cast and the bass would strike out of reaction. So now the heads have been perfected to allow them to come through cover easily and the swim jig has become a staple for fishing shallow cover. They are great around wood, grass and other shallow cover and reeling them fast is often a key to getting bass to react. You can fish them in inches of water or feet of water by changing the weight of your jig and speed of your retrieve. 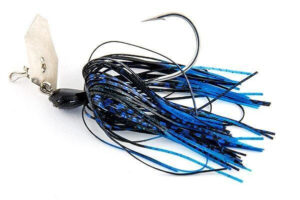 Bladed swim jigs fall somewhere between a swim jig and spinnerbait in our estimation. At least for the bass you target with these baits. Rad Lures created a shaker blade and attached to a jighead and created the Chatterbait. Now the Z-Man Chatterbait, this bait set off a storm in bass fishing several years ago but the effectiveness of bladed swim jigs is equal today. The blade on the jig gives it a tight vibration unique from spinnerbaits and crankbaits but still with a jig profile. Fished with split tail, curl tail or flapping trailers, the bladed swim jig catches big bass and lots of bass from shallow water and deep water alike. You can get them in weights 1/4 to 1 ounce. We generally like black/blue, shad patterns, and bluegill patterns on these baits as they can mimic shad, bluegill and other erratic forage for bass.

For a better idea of when to use each lure in your tackle box, check out our Bass Fishing Lure Selector Chart.