The transition of late summer into early fall can be a tough time to catch walleyes. Fish don’t grow legs, but at this time of year, it can seem like they do. Some lakes experience a turnover, while others just seem to go void of all life. As a result, many anglers call it quits for the year and start prepping gear for ducks and bucks.

Those in the know can take advantage of some great fishing without the crowds. Much like bass and many other species, walleyes can be highly concentrated in small areas, creating this feast or famine situation. Oxygen levels and fluctuating water temperatures are to blame for this.

Three things can help anglers break down big water for fall walleyes that include the following:

Walleye guys seem to know how to use their electronics better than most. Anglers will find electronics especially important during this period. Today’s units allow you to run and graph for fish or bait in excess of 20 mph, allowing you to quickly eliminate water. Bait fish are key. Locate them and you will find walleyes. At 20 mph catchable walleyes will only look like a little blurb on a color graph. Larger blobs are not walleyes, but typically schools of bait fish. The slower you travel the more drawn out from left to right they will become. The faster the boat is moving, the more vertical you will mark them.

A relatively new advancement in electronics will make your life much easier. Down Imaging on my Humminbird 1159 gives me a little different view as compared to traditional 2D sonar. By running in split screen sonar (one 2D and the other down imaging) you can see the same picture very differently.

Baitfish balls on down imaging tend to look like individual packs. So much so that you can confidently distinguish between a ball of small emerald shiners, shad, perch and even white bass. It’s important to know what the forage is and if the walleye are relating to specific type. Just knowing that white perch or bass are present is reason enough to check trolled lures more frequently.

“I personally would rather fish for 10 fish that are high in the column than 100 that are near bottom.”

This time of year knowing what to look for on the graph isn’t good enough with walleyes so tightly packed. Looking for transition areas that aren’t very far from where walleyes will winter is a high percentage bet.

Look for areas that go from very deep and transition much shallower. If ice fishing occurs on your given lake, look for areas that are known producers in the winter months and start your search near these same deep transitions. Also be aware that the larger the lake, the more migration and fish movement will occur. On large bodies of water, such as Lake Erie, the areas between the eastern and central basins and the areas between the central and western basins are good examples of movements.

Walleyes tend to be very high or very low in the water column in the fall. It is not uncommon to see and catch them right on bottom in 50 feet of water. Both of these locations can be very difficult from a marking standpoint. Anglers often think that fish on bottom are easy to mark, but that isn’t the case most times.

When looking for bottom fish use the zoom feature and pay attention to slight bumps and color changes on the graph. If you regularly see bumps on the bottom it is best to run a lure near bottom in an area that “looks fishy”. Fish that are right on bottom can be almost impossible to see even on the best sonar units.

High fish can be just as difficult because they are much spookier and the width of the transducer is much smaller. If you see a couple marks high in the water column, rest assured there are many more present.

I personally would rather fish for 10 fish that are high in the column than 100 that are near bottom. High fish are typically chasing bait and thinking about putting on fat for the long winter and much less picky than neutral to negative bottom-hugging fish.

Reefs tend to create more oxygen, whether it’s because they are shallow and waves are crashing over them, or the presence of weeds. Regardless, they offer high percentage areas when they top out very shallow and have deep water access close by.

Rougher and nastier waves and weather typically translate into walleyes getting extremely shallow. Catching fish in just a couple feet of water is not uncommon. Fishing on shallow reefs works most days unless it is flat calm with blue bird skies. 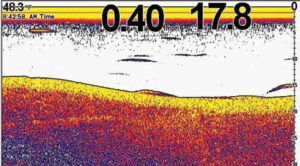 Where doesn’t water clarity mean something? It determines where and how you fish for just about every species, and walleyes in the early fall are no different. While finding walleyes this time of year can be challenging, figuring out water clarity is not.

Dirty water is common this time of year. Big blows occur from the North and East as the lake temperatures begin to drop, and this often means dirty water is going to be an issue half the time. Open water fish get much more difficult, particularly walleyes deeper in the column. High fish can still be caught, but they often disappear when the water gets murky and bait fish disperse.

Dirty water presentationsâ€”Look at small crankbaits for more vibration. The dirtier the water, the more rattles play a role for added attraction. Switch between minnow and shad bodied lures to see what is preferred, but don’t be afraid to grind bottom with large-billed lures to help them deflect off the rocks and avoid snagging.

Super clean water can spell as much of a disaster as muddy water. Look for fish to slide to the edges of the reefs when water visibility significantly clears. The reef tops can still produce when skies are overcast or you have enough surface chop to break up the light penetration.

Open water in gin-clear conditions is usually a more consistent pattern and easier to audible. Walleyes may be found slightly deeper due to more light penetration, but still very catchable. Look for them to rise great distances throughout the water column, creating a much larger strike zone.

The biggest mistake at this time is running your baits too low, make sure to keep at least one very high in the water column. Planer boards, often 100 feet or more out to the side, will help you cover more water and keep from spooking leery walleye.

Clean water presentationsâ€”Make sure to have a good selection of spinners, smaller blades on shallow rocks and larger blades in the open water. Larger-sized Colorado blades (5, 6 or larger) can help both open water high suspending or bottom oriented walleyes to pick up on their flash and vibration.

Early fall can be a tough time to catch walleyes, especially without a plan. Knowing what to look for under a variety of conditions will help you catch some of the biggest walleyes of the season when your buddies give it up for ducks and deer.