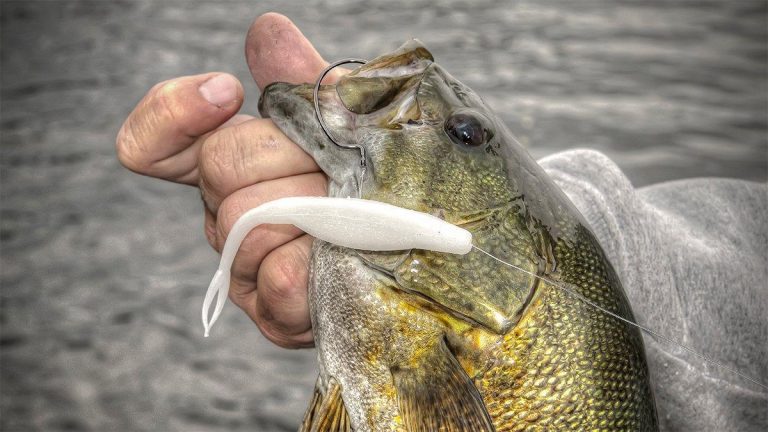 Dizziness aside, sometimes seeing double is a good thing. In fact, the practice of fishing for bass tandem-rigged lures holds home-run potential when strategically employed.

In some cases, the idea is to mimic a small cluster of bait—often to leverage the opportunity-rich occurrence of schooling bass. Other times, it’s about immediate second chances for fish that miss their initial strike, or get cold feet. Often the sudden appearance of round 2 provides sufficient boost in aggression to stimulate a more successful attack.

Let’s look at how bass several bass fishing professionals use double trouble to tempt their quarry.

A pair of poppers, walkers in tandem–both create a concentrated area of activity that bass can’t resist. Preferring the latter, western pro Roy Hawk pairs a Lucky Craft Sammy 65 ahead of a Duo Realis Pencil 110. After removing the Sammy’s rear hook, he connects the Pencil with 1- to 2-feet of 25-pound monofilament leader.

“I use this anytime fish are schooling—mainly in open water,” Hawk said. “It helps me capitalize on a short window of opportunity. Many times you hook one and then you end up getting another one.”

Favoring the Yamamoto D-Shad, Ehrler rigs a pair of baits with 4/0 Gamakatsu EWG hooks and fishes them on 15-pound Sunline Sniper SC fluorocarbon. A small swivel links his main line to 2 feet of 14-pound Sniper leader tied to the lower bait.

Before attaching this leader swivel, Ehrler runs his main line through the top eye of another leader swivel. On the cast and retrieve, this secondary leader (same specs as the first) slides down to the main swivel with a full range of motion optimizing the presentation.

“I use the double rig around schooling fish when they’re corralling and busting on baitfish,” Hawk said. “I make sure to be as quick and accurate as possible to get as many bites as possible.” 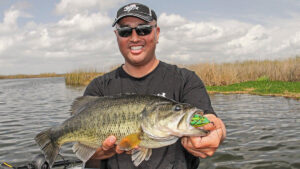 We’ve all seen bass bumping lily pads or grass mats in an effort to reach a passing frog. Maybe it’s the same fish, maybe a there’s a cluster of fish competing for the same target. In any case, California pro Ken Mah likes to give his Delta bass a double dose of fake frogs.

Although the rig casts better with the smaller frog in front, he leads with the bigger bait for maximum initial impact. To manage this somewhat awkward setup, Mah suggest a swing cast, similar to what you’d use with a Carolina rig.

Mah attaches his frogs with a leader made of 65-pound braid. He starts by tying a loop knot in one end and passing the standing end through the loop to form a lasso, which he passes over the lead frog’s hooks and cinches onto the twin shanks. Tying the other end of the braid to the trailing frog completes the rig.

“Throwing on mats is the best deal for this rig,” Mah said. “A lot of times I’ll get a blow up on the larger frog and then I can pull the smaller offering right into where the fish blew up.”

Mah has also found he can fish two River2Sea S Waver swimbaits simultaneously by replacing the rear treble from one bait with a round Owner Hyper Wire split ring and an oval split ring, which links to the second bait’s line tie.

“I usually like to use this when the fish want an erratic, almost ripping type of retrieve; although I’ve caught them slow rolling it as well,” Mah said. 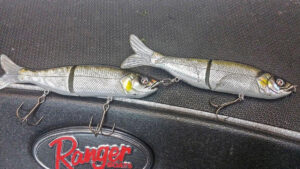 “This works well with spotted bass because a shaky head is a great way to generate bites with spotted bass, but I also catch them really well on a dropshot,” Scroggins said. “So, you have the best of both worlds.

“You can work more of the water column, whether they’re suspended more or if they’re on the bottom.” 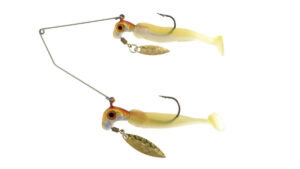 One of the easiest methods for doubling your bait presentation uses a smaller version of the umbrella rig concept with two baits hung from a wire frame. Example: Blakemore’s Randy’s Bass Buffet Rig employs two of the venerable Road Runner underspins with shad tails on a twin arm wire.

For wide-open diversity, the YUMbrella Double Up rig sports twin wire arms with snap swivels for mounting two topwaters, two spinnerbaits, two swimbaits, two jerkbaits – whatever. Do-it-yourselfers might fashion their own by forming a line tie loop in a piece of rigid wire with a short arm on top and a long drop arm bent at a 45-degree bend for bait spacing. Adding snap swivels at each end allows you to run just about anything you please on this tandem setup.

With either option, experimenting with different baits will help you dial in the day’s preferences. Even between two of the same bait, vary colors until you identify consistency. 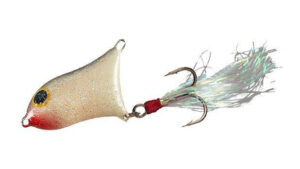 Get Out in Front

War Eagle’s Front Runner offers a convenient tandem option. A painted plastic head tapers into two short arms with the lower dangling a feathered treble and the upper sporting an eyelet for attaching your trailing bait.

With this and any tandem rigs, you’ll typically sacrifice some lure action for the increased offering. No worries, this is less about fooling wary fish, than it is about appealing to gluttony. 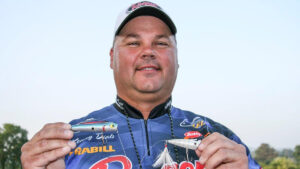