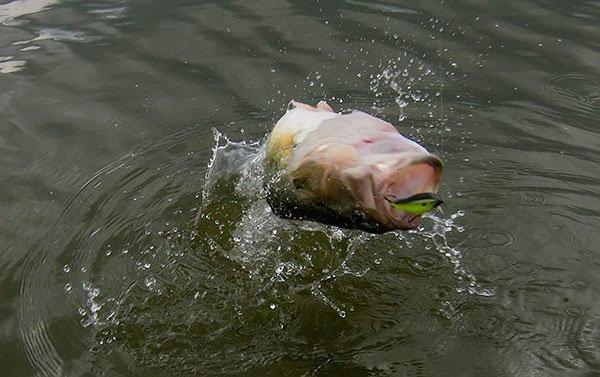 Bass fishing crankbait are legitimate producers throughout much of the year. Although productive, there’s more to crankbait fishing than casting and reeling. Learning to modify these lures to better suite each situation will result in remarkable increases in both the quantity and quality of your catch.

The possibilities of crankbait modifications are endless. This article focuses on the 6 simplest adjustments you can make on the fly in the most time-sensitive situations.

Make your crankbait swim to the side 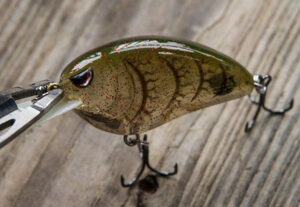 Anglers go to great lengths to ensure their crankbaits run trueâ€”or straightâ€”on every cast, so why in the world would you need to make them swim to the side? When fishing both floating and wooden docks, having an off-center crankbait can result in extra bites and some really nice bass.

To change the swimming direction of your crankbait, you’ll need to bend the lure’s line tie with a pair of needlenose pliers. Grab the line tie with your pliers and slightly bend it in the direction you want your crankbait to swim. After each small tweak, make a short cast to test your modification and adjust accordingly. I have at least three versions of each crankbaitâ€”a left, right and straight-running version to cover each casting angle and boat position.

Think about it for a minute. When most anglers crank docks, they cast parallel to the fronts and sides of them. Most likely, they’re using a crankbait that runs fairly straight. This essentially puts the proverbial ball in the bass’ court because these anglers are relying on the bass to come to their crankbait. In several situations, such as bluebird days when the bass are reluctant to aggressively chase prey, this run-of-the-mill approach won’t cut it. This is when you need to take matters into your own hands and bring your crankbait to the bass.

By tuning your crankbait to swim to the side, you can make the same parallel casts you normally would while giving your crankbait the ability to dart underneath the docks, forcing the bass to react. It will collide with the posts, bang off of ladders and sneak into the dark, covered areas in which bass aren’t accustomed to seeing a crankbait. This unfamiliarity often results in incredibly productive patterns that most anglers overlook.

Add some color in lowlight conditions 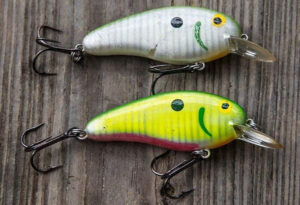 If you’ve previously been catching a lot of bass on a specific color crankbait in bright, sunny conditions, don’t get discouraged when you can’t reproduce your success in lowlight conditions. More times than not, all it

Take a Spike It Scented Marker and color both sides of your crankbait. I’ve also used generic dipping dye and cotton swabs before as well as a highlighter marker, so just use whatever you have handy. I primarily stick with chartreuse, but will also use orange throughout the early spring when the bass are heavily feeding on crawfish. Let the crankbait dry for a few seconds and you’re ready to go.

All it takes is a small color tweak to account for the decrease in light penetration.

At the risk of sounding ridiculously obvious, bass need to see your crankbait. Sure, the rattles and water displacement certainly help the cause, but color matters. Bass can’t see as well in lowlight conditions, so you need to make your crankbait stand out a bit more. Not everyone has hundreds of crankbait colors from which to choose, but keeping some soft plastic dye will help you cater your crankbait to low-visibility conditions. 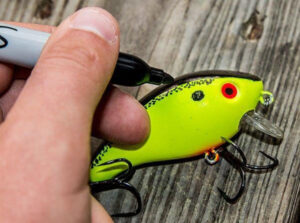 Anytime you’re crankbait fishing in dirty water, make an effort to consider the color contrast, or lack thereof, of your lure. In my opinion, there’s a misconception among anglers that as long as your crankbait is bright and painted in some “loud” color, the bass are going to react to it in dirty water. I don’t believe in that.

To add contrast to your bright-colored crankbaits, all you need is a black permanent marker. You’re not trying to win an award with your artwork, so there’s no need to stress about making it perfect. Color the entire top-section of your crankbait black while also incorporating the black onto the top-half of the lure’s sides. I also like to draw a small circle behind the gill plate of the crankbait to give the bass a little extra contrast to hone in on. Let the crankbait dry for a few seconds and start fishing again.

One of the most productive crankbait colors in existence is Firetigerâ€”it’s impossible to know how many millions of bass have fallen victim to it. Its effectiveness stems from its high amount of color contrast. I’ve never seen a Firetiger-colored shad swimming by my boat. The greens, yellows, blacks and reds make the color “pop” and increase a lure’s visibility for nearby bass.

To further understand what I’m trying to articulate, imagine you’re underwater in a stained creek arm of your favorite fishery, wearing a scuba mask. Everything is going to have a reddish/orange tint to it. If an all-chartreuse crankbait comes whizzing by your face, you’ll see it, but you won’t be able to make it out very wellâ€”it blends in with the background. However, if a chartreuse crankbait with a solid, jet-black back crosses your field of view, you’ll get a good look at it, recognize its profile and be able to track it much easier. The same goes for bass. 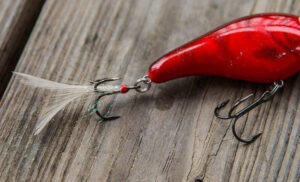 Clearwater bass are notorious for slapping and swatting at crankbaits. It doesn’t seem to matter how long of a cast you make or what type of retrieve you implementâ€”these little suckers have an advantage over you. They can see very well, making them extra aware of even the smallest unnatural crankbait characteristics. Whether it’s the treble hooks, fishing line or split rings, they’ll get a serious case of lockjaw.

In these situations, I’ve had a lot of success replacing my rear treble hook with a feathered treble. I don’t know if they really mistake the feathers for a shad necessarily, but I believe it’s a very natural-looking way to distract them from a crankbait’s more abnormal characteristics. They see the subtle, waving movement of the feather and for whatever reason, they can’t help themselves. Again, that’s just a theory, but either way, I know it works.

Use short-shank hooks around heavy cover 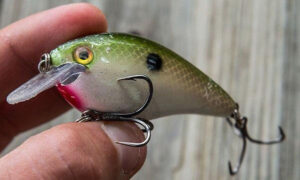 A lot of anglers are afraid to throw crankbaits in and around heavy cover. With a bunch of crud on which to get hung, they can’t bring themselves to possibly lose an expensive lure. While I understand the money aspect of it, I believe those anglers are robbing themselves from some incredible bass fishing action.

First things first, pick up a few packs of short-shank treble hooks from your local sporting goods retailerâ€”you can find them just about anywhere. The shorter shanks also allow you to use larger hooks without the risk of tangling, so you can usually get away with buying one size larger than the lure’s original hooks. Put the short-shanks on the split rings and slide the old hooks into the floor of your boat. Before hitting your best areas, make a few test casts to ensure the larger hooks haven’t inhibited your crankbait’s swimming action.

Heavy cover bass see thousands of jigs, plastic worms and creature baits every year. In fact, if you go to your local fishery right now, I’ll almost guarantee someone will be flipping and pitching heavy cover. Now, I’m not saying it doesn’t workâ€”because it doesâ€”but the bigger, smarter bass become accustomed to seeing the same ol’ stuff every Saturday. They know it’s not real and they’re not falling for it.

To catch these giant bass off-guard, show them something different with a crankbait. If you stick with normal long-shank trebles, however, you’re probably going to get hung. They dangle all over the place and are prone to catching limbs, branches and stumps. This is where short-shank treble hooks come into play. The hook points sit much closer to the belly of the lure, which drastically reduces the likelihood of crankbait-losing hang-ups. You can crawl your squarebill over and through cover with the utmost of efficiency. 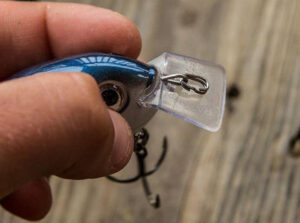 This is a big deal for me whenever I’m crankbait fishing. While many crankbaits come with round split rings attached to their line tie, I really prefer oval-shaped split rings. Not only does it help reduce potential knot failure, but it also gives my crankbait a little more action.

This modification is simple, but it can be very irritating without a good set of split ring pliers. Gap the existing split ring with the pliers’ beak, slide it off the line tie and replace it with an oval-shaped ring. If you’re bound and determined not to purchase an inexpensive pair of split ring pliers, you can make it work with your fingernails, but it won’t feel very good after a few rounds.

Regardless of the knot you use, you never want to tie it in the gap of a split ring. As the crankbait wobbles back and forth throughout the day, the knot slowly loses integrity as it rubs against the two open ends of the ring. The next thing you know, you’ve lost a big fish and an expensive crankbait. Oval-shaped line split rings eliminate this problem entirely because their openings are on the long, flat side of the ring, so there’s no way your knot can become trapped in the “danger zone”. You don’t have to spend a bunch of time spinning a round split ring while tying a knot and you can fish all day with confidence.

These oval-shaped split rings also increase the distance between your knot and the nose of the crankbait, resulting in a wider range of motion throughout the retrieve. When your lure collides with cover, it will also kick to the side more aggressively, reducing hang-ups.

If you’re not getting bit on your crankbaits, don’t keep doing the same thing. Take a few minutes to think through the situation and make these very easy, yet important modifications. Over time, you’ll notice a big increase in your cranking success.