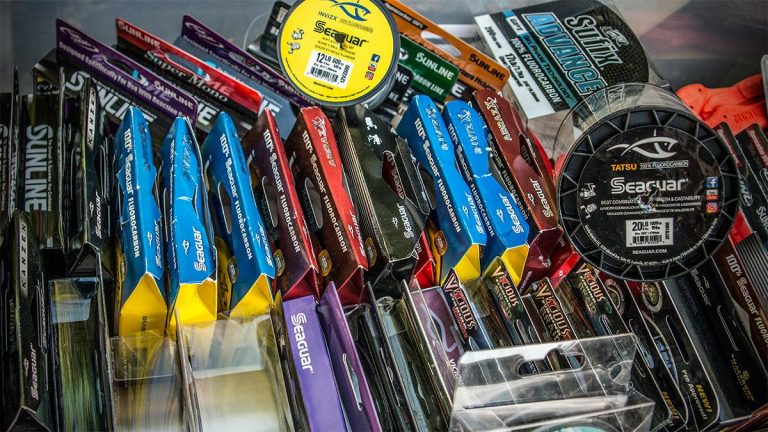 Just a little over a decade ago, I was a college angler who didn’t have two pennies to rub together. As much as I loved buying fishing tackle, I also dreaded seeing my online cart when it came time to enter my credit card information. I honestly felt like I was at a disadvantage if I didn’t spend as much money on gear as my competitors did. It was an overwhelming feeling at times, if I’m honest.

Fortunately, however, I’ve made sure to remember that feeling throughout my career. Bass fishing can get super expensive if you let it, but it doesn’t necessarily have to be that way. If you can simplify your fishing and stick with your preferred methods or strengths, it’s very possible to enjoy this beautiful sport without emptying your bank account. It just takes a little bit of planning.

I made a line order the other evening and it reminded me of how much I used to overthink my fishing line selection. I’d go crazy trying different brands, diameters, materials and colors. Did it result in more fish? I don’t think so. But it sure as heck emptied my checking account.

So I wanted to put together an easy-to-understand list that simplifies your line selection process. I truly believe that these six line sizes will cover pretty much every situation you’ll find yourself fishing in this year.

I know a lot of anglers take pride in using heavy tackle for power fishing and they hate spinning rods. Honestly, that act gets pretty old to me. It’s not wimpy or beneath you to use spinning gear. When you’re fishing clear water or you’re faced with tough fishing conditions, light line and finesse presentations simply get bit. There’s no way around it. The combination just works.

That’s where 8-pound test comes into play. While some anglers may prefer to use 6-pound test in some situations, I personally believe that 8-pound test is more versatile. In most situations, you can use it for drop shotting, Neko rigging, wacky rigging, throwing a soft jerkbait, pitching a floating worm and skipping a shaky head around shallow cover. While it’s still thin enough to fool most clear-water bass, it also has just enough diameter to withstand an occasional rub against a dock post or rock pile.

Again, because fishing line is so dependent upon personal preference, you can either go with monofilament or fluorocarbon here. I tried to use straight fluorocarbon on my spinning gear for a year or so, and while I had mild success, I ultimately decided to go old-school and revert back to straight monofilament. No matter what type of fluorocarbon I used, it just didn’t behave as well on the reel. Monofilament has less memory and to make it even more appealing, it’s normally more affordable.

What I’ve been using lately: 8-pound Sufix Advance Monofilament. It plays nice on the spool, doesn’t have much memory and has proven to be really strong around cover. 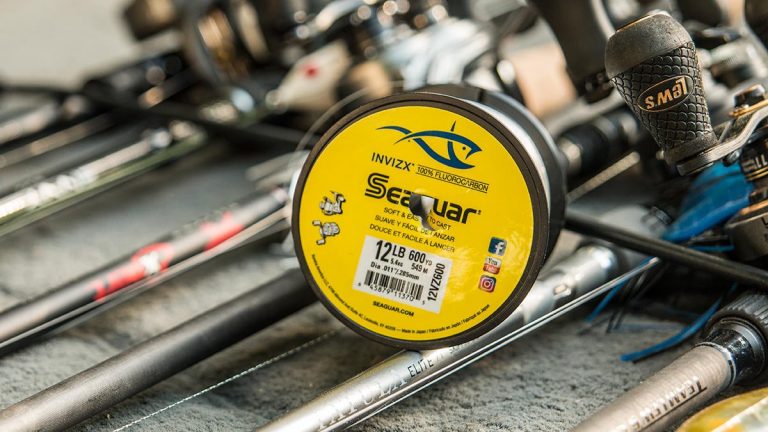 If I’m winding or cranking a bait with treble hooks, you can almost guarantee I’m using 12-pound fluorocarbon for the job. I always make sure to have several spools of this line in my shop because I use it for finesse crankbaits, jerkbaits, deep-diving crankbaits, lipless crankbaits in open water and vertical jigging spoons. Again, if it has treble hooks and as long as its not a topwater lure, 12-pound fluorocarbon is a major part of my arsenal.

Depending on how you prefer to fish a squarebill, you can certainly use this line size for squarebills as well. If I’m just winding down a stretch of riprap or skirting the perimeters of boat docks, I won’t hesitate for a second to tie it on 12-pound fluoro. But I will upsize it a bit if I’m working it through thicker cover.

What I’ve been using lately: I use 12-pound Seaguar InvizX for a lot of my treble-hook techniques. Not only is it strong, but it seems to have just a little bit more stretch than other fluorocarbons, which helps me keep fish pegged when they start digging at the side of the boat. 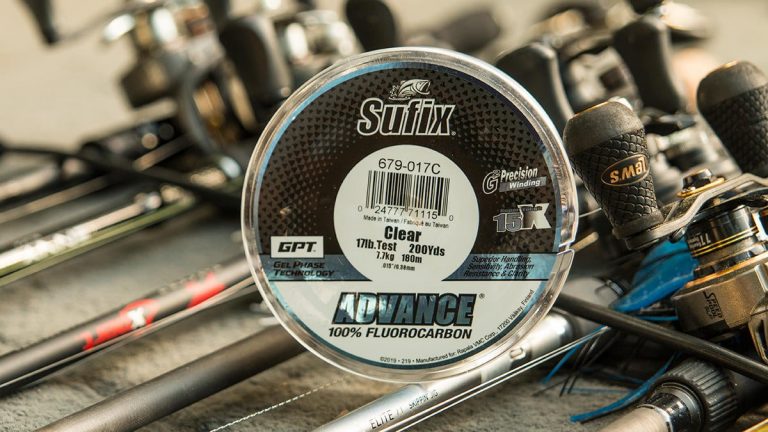 This is probably the most versatile line size I use. Whether I’m fishing a squarebill in fairly thick cover, a spinnerbait or a generic Texas rig around docks and shallow cover, I’m most likely spooled up with 17-pound fluorocarbon line. In this particular line size, I look for a line that’s more abrasion resistant; I’m not as worried about the amount of stretch in this case.

When you put this size line on some sort of medium-heavy action casting rod, you’re arming yourself with one of the most versatile combinations in bass fishing. It works great for both reaction-type lures and bottom-contact presentations. This line is tough enough to withstand most abuse while also allowing your baits to move naturally underwater.

Whenever I’m pitching and skipping a jig, I’m using 20-pound fluorocarbon line. I don’t really deviate much from this selection, to be quite honest. You can certainly bump up to 25-pound line in this situation, but you’ll have a harder time skipping the bait due to the increased diameter and decrease in manageability. The breaking strength and abrasion resistance between 20- and 25-pound test really hasn’t been that noticeable to me.

I’m normally pairing this line on a heavy-action casting rod and using it exclusively for 3/8- to 1/2-ounce jigs and bulkier Texas rigs. If I’m pitching a creature bait with a bit more mass to it, such as the Culprit Incredi-Bug, I’ll definitely opt for this 20-pound line.

You can expect plenty of bites on this size line, even in clear water. I’ve caught some giants flipping a green pumpkin-colored jig in water with 6 feet of clarity. It conceals itself pretty well and it’s also plenty brawny enough for close-quarters combat in the thickest cover on the lake.

What I’ve been using lately: I’ve been using Seaguar Tatsu Fluorocarbon for years and it has always performed quite well. I’ve pulled out some nice bass from some especially thick cover with no breakages whatsoever. It also behaves nicely on the spool. 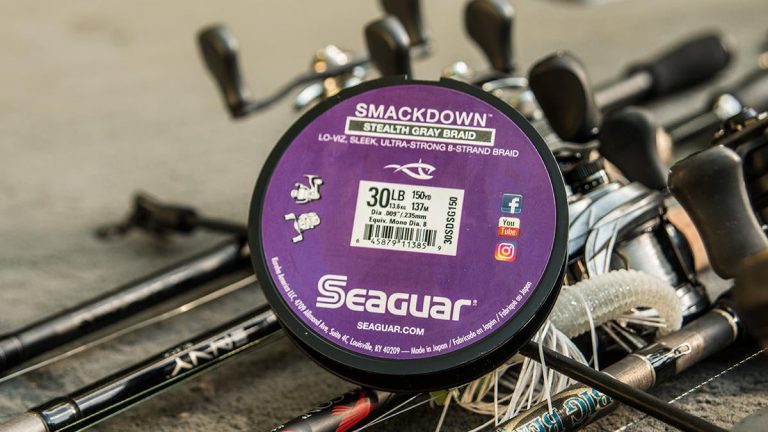 To be quite honest, this is probably the line size I use the least on this list. I make a concerted effort to keep my fishing as simple as possible, but there are a few reasons I always keep a few spools of 30-pound braided line handy.

The primary reason I included this on my list is because of its effectiveness with topwater lures. If you’re walking a bit topwater plug such as a Zara Spook, a Lucky Craft Sammy or a 13 Fishing Duel Pitch Top Walker, the responsiveness provided by 30-pound braid is impossible to beat. While you can opt for monofilament with your walking topwaters, the diameter of 30-pound braid is much smaller and allows for astronomical casting distance. Also, when you get a bite 30 yards from the boat, the no-stretch properties of braided line allow for an outstanding hookup ratio.

What I’ve been using lately: I got hooked on 30-pound Seaguar Smackdown a few years ago on Lake Hartwell. It’s strong, it doesn’t dig into itself and it’ll easily last a year or more once it’s on your reel. 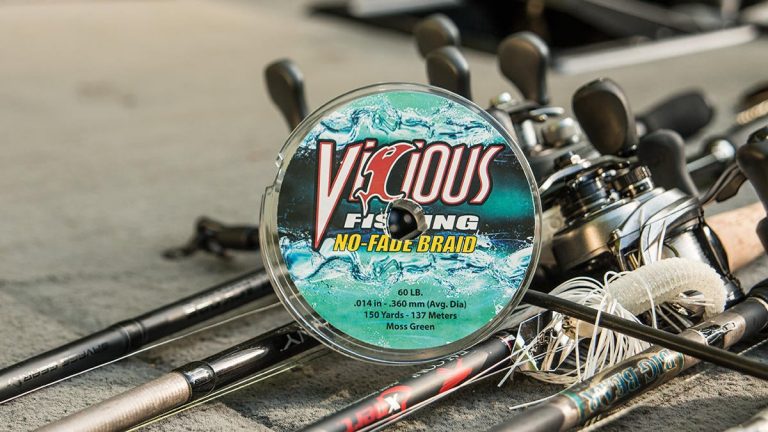 A lot of folks think that 65-pound braided line is a major overkill for bass fishing, but I couldn’t possibly disagree more. Personally speaking, I do a bunch of shallow-water power fishing for 10 months of the year. I purposely look for the thickest cover I can find and I’ll target it with topwater frogs, buzzbaits and heavy Texas rigs. When I’m in the thick stuff, I’m a big proponent of 60-pound braid.

Again, braided line has zero stretch and 60-pound braid isn’t nearly as thick as you might think, so it handles beautifully on most casting reels. When a big bass explodes on my frog in the middle of a thick grass bed, I need all the help I can get to rip it out and put the fight into my hands as quickly as possible. A heavy braided line allows me to do just that.

What I’ve been using lately: I’ve been using 60-pound Vicious No Fade Braid for quite a while and I’ve had lots of success with it. It doesn’t dig and it’s stiff enough that it doesn’t wrap around your line guides. If you’ve fish with braid a good bit, you know how important this trait can be. Also, as the name entails, the color absolutely will not fade from this line.

Are there other applications for other line sizes? I’m sure there are. And I’m also sure that not everyone is going to agree with each of my selections-that’s totally fine. I try to keep things as simple as possible and in doing so, I do my best to remember that we’re all at different ends of the budget spectrum. These line sizes will cover your bases for just about everything and will help you have a more targeted and budget-minded approach during your next shopping trip.