When it comes to summer offshore fishing, there’s infantry and there are snipers. The former compete on well-known areas where schools of bass make brief appearances, while the latter will stake out the roads less travelled, the sneaky hideouts, the off-the-wall spots and pick off their targets.

Cole Floyd, a Junior at Bethel University, came close to riding the latter philosophy all the way to victory at the recent 2017 Costa FLW Series Central Division event on Kentucky Lake. Finishing just 7 ounces behind winner Jason Lambert, Floyd began with a clandestine spot, but ended up faring far better when a little extra looking led him to a random gem that the masses would likely never find.

Having located a school on the point of an underwater island during practice, Floyd decided to idle the straight line edge leading to his initial target. About a 1/2-mile away, he spotted a subtle protrusion jutting out from an otherwise nondescript contour.

“The fish normally set up on the point of that island, but they weren’t there (in the tournament), so I just started idling down that straight river ledge and they were on a little knob,” Floyd said. “In the morning, they’d set up on top of that knob and later in the day, they’ll back off a little deeper.”

The key was twofold: First, don’t hesitate to explore seemingly featureless areas like straight ledges. Second, don’t be intimidated by vast amounts of structure. Pick a stretch and give it a thorough inspection.

Also favoring subtle depressions where fish can lay below the current and feed; Floyd shared a couple more of his strategy points.

“I like finding fish on creek channel ledges because the fish move a lot more than they do on main river ledges and it’s harder for people to stay on them. I think that’s due to the lack of current and the bait doesn’t come to them. You just have to work harder to stay on these fish.”

Floyd prefers the upper end of a TVA lake where shallower water tends to limit the graphing crowds and leave more of these sweet spots unmolested.

“It’s harder to scan in shallow water and that makes it more difficult for people to find fish. You have to be better on your graph and you have to be able to use side scan to locate fish in the shallower spots.

“Say, I find a shallow bar in 6 feet of water, you can’t scan in 6 feet, but if you can just fish and find them, you’re on the right track because more than likely they won’t be found.” 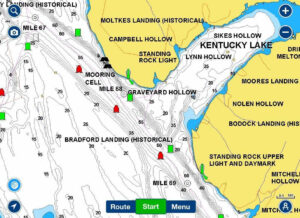 “The biggest thing that comes to mind, especially on Kentucky Lake, is a place on top of a flat that has a high spot; just enough contour change to hold fish. It might have some stumps on it or shells or rocks or something a little different than the typical ledges people fish.”

As each year brings increased fishing pressure, Hunter believes future tournament toppers will find their winning sacks on such spots. 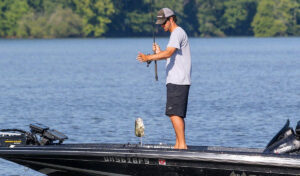 Some of Hunter’s off-the-wall spots are defined more by proximity than the actual structure.

“Everybody goes to the obvious main lake points on a map — on most maps like Navionics are shaded blue,” he said. “What I tend to do is look out a little deeper. Those points don’t just come up and drop straight down; most of them taper way out.

“What I tend to do is graph out a little father and into that deeper water where those fish that do feel the pressure may have (repositioned). If it’s 25 feet or less, the crankbait works good; but if it gets deeper than that, I’ll pick up a swimbait, a big spoon, a drop shot — something that you can get down there and know it’s on bottom.”

How to Side Scan Deep Bass

What Bass Look Like on Down and Side Imaging

Finding Bass with Sonar and Imaging