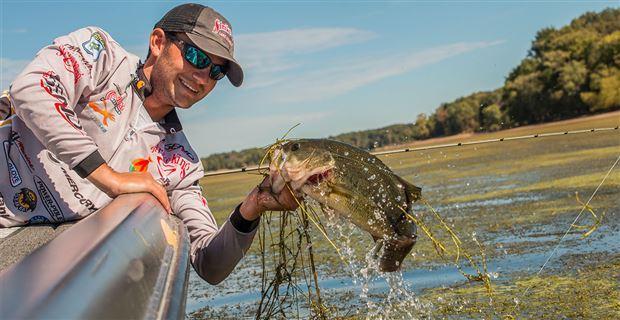 Bass anglers are notorious for making things more difficult than they really are; we’re all guilty of it in some fashion. With the myriad of topwater frog colors available today, a simple trip to the tackle shop can turn expensive in a hurry. Our curiosity gets the best of us and before we know it, we’ve spent a lot of money on colors we’ll likely never use.

Elite Series pro Jordan Lee is a big believer in simplicity. Cutting his teeth on famed Lake Guntersville, he has quickly earned a reputation as one of the best topwater frog anglers in the country. According to him, there’s no need to get carried away when you’re choosing frog colors. There are no complicated theories to his selection process; he knows what works and he sticks with it.

If you can get your hands on these three colors, you’ll have your bases covered this year.

There probably aren’t many white-colored frogs hopping around the banks of your favorite fishery, but don’t let that dissuade you from keeping a white hollow-bodied frog rigged up this season.

“There are two situations in which I’ll utilize a white Strike King KVD Sexy Frog,” Lee said. “When the bass are feeding heavily on shad and when it’s cloudy and rainy. I pay close attention to the throats of all the bass I catch; if I see big shad tails protruding from their crushers, I know it’s time to throw a white frog. More importantly, however, this particular color can wreak havoc in lowlight conditions.”

That last sentence may come as a surprise to many bass anglers. We’ve been taught for years to throw darker colors in lowlight conditions, so what gives? In Lee’s opinion, it’s hard to argue with years of results.

“Honestly, I don’t know what’s going through their minds down there,” Lee said. “But time and time again, I’ve seen white topwater frogs out-fish dark-colored frogs in nasty weather conditions. I know it’s the opposite of what you might think, but the difference can be absolutely incredible.”

When you find yourself targeting shallow vegetation, Lee strongly suggests keeping a brown or black-colored frog nearby. His reasoning is simple: it’s all about the bluegill.

“I’m almost always attempting to imitate a bluegill when I’m frog fishing,” Lee said. “They’re a favorite food of big bass and they love to hang out in thick vegetation. When they live underneath that massive canopy, they’ll turn almost jet-black. These dark colors can be especially effective on sunny days because in my opinion, it looks a bit more natural and doesn’t spook wary bass like a brighter frog might.”

The choice between brown or black isn’t necessarily cut-and-dry. As Lee approaches an area, he’ll make roughly a dozen casts with each color until he gets a few bites. Experimentation is a huge factor in this situation.

“You can pull up to one grass bed and the bass will only eat a brown frog and the next stop you make, they’ll only touch a black one,” Lee said. “That’s why I suggest having both colors rigged up and ready at all times. While it’s not always easy to predict, the fish will tell you their preference very quickly.”

Although topwater frogs are most frequently utilized in grassy areas, don’t count them out when you’re targeting other types of shallow cover. Whenever he’s fishing the more “unorthodox” frogging cover such as docks, laydowns and overhanging trees, green pumpkin-colored frogs are his weapon of choice.

“If I’m walking a frog around fairly sparse cover, I try to choose the most natural, non-threatening color I can think of,” Lee said. “To me, green pumpkin is difficult to beat. Because the fish aren’t tucked so tightly into the cover, they’re going to get a better look at your offering. If they see anything that doesn’t look right, such as bright colors, they’ll be less inclined to attack it.”

Trim the legs regardless of color 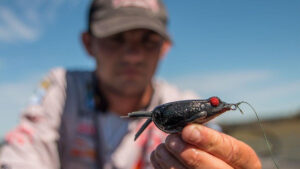 While you can certainly catch fish on unmodified topwater frogs, Lee trims the legs on nearly every frog he uses. Each is trimmed differently depending upon its designated application.

“When I’m fishing open water, I like to leave my legs a little longer so the frog walks better,” Lee said. “But I’ll still trim one leg about an inch shorter than the other. This frees the action quite a bit and allows it to dart from side to side with very little rod movement. In areas rich with vegetation, I’ll only leave about an inch of leg on each side of the bait. The frog needs to ‘scoot’—not walk—across the grass and this also gives the bass a better chance at eating the body of the frog, not just the legs.”