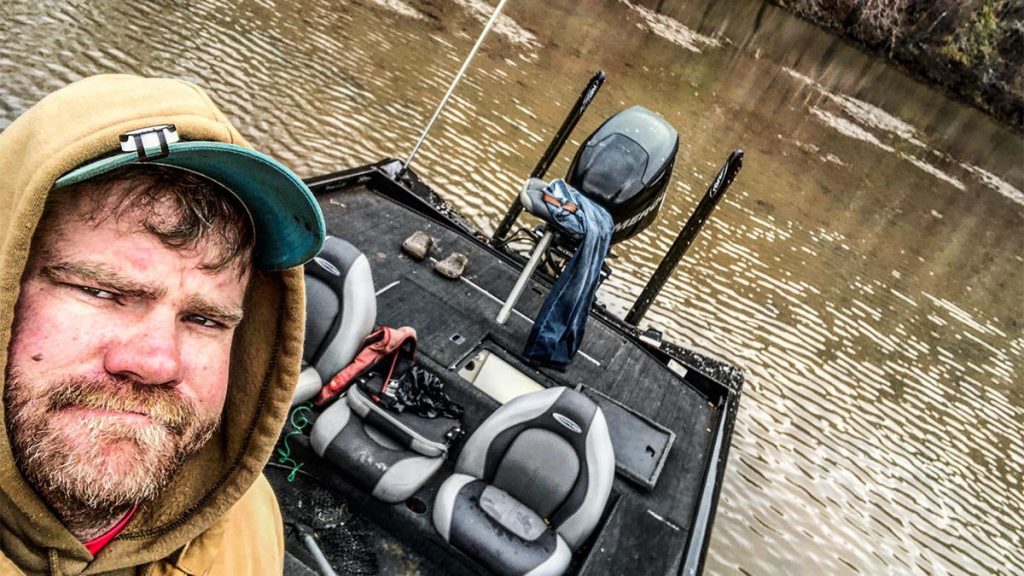 There’s a lot going on in the world today. Social injustices, wars, genocides. So what I’m going to talk about today is small potatoes in the grand scheme. I get that. But it’s still something that is unnecessary and detrimental to the playing field of the sport we all love so much. And honestly, in this thin-skinned, victim-filled society we live in, I’m actually shocked that something hasn’t already been done to stop it. The only reason I can gather is the age-old culprit that the Good Book itself lays out as the root of all evil.

So what am I talking about exactly? The detrimental effects of clear cutting and land development in our watersheds. Now, I’m no expert. I don’t have a law degree. I’m not an ecologist. I admittedly haven’t done a lot of research on the topic. I’m just a good ole boy from Alabama who has seen the world change around him. 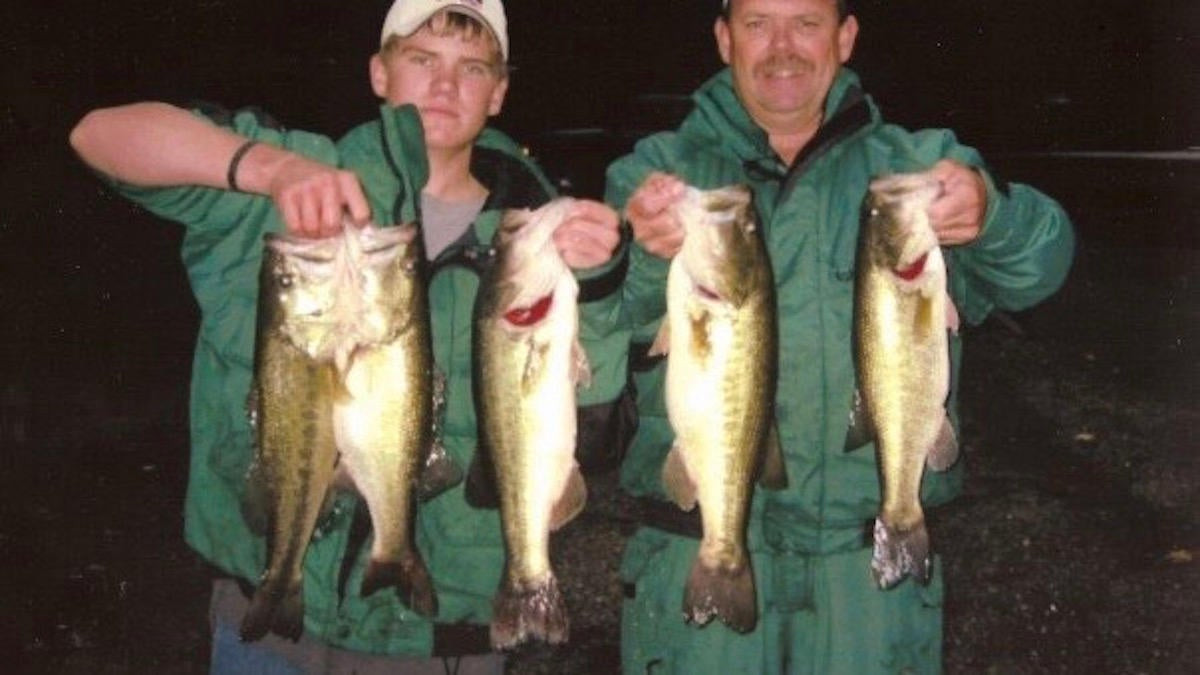 I have experienced the results of the deforestation firsthand. I have fished Saugahatchee Creek, the main creek on my local lake, all my life. My dad has also fished it all his life. And his father before him. When I was a child, my dad and I could run a mile farther up the creek than we can now. That was 25 years ago. 25 years before that, my dad could run another mile further up the creek before shutting down. That math isn’t complicated. Eventually the back of the creek will meet the mouth.

Stretches of the creek that were 10 feet deep when I was a kid are now three feet deep. The whole thing is silting in. Most of this is the result of the logging industry harvesting wood along the creek’s shore for paper companies. When these companies come in, they are allowed to completely strip the land to as close as 35 feet from the water’s edge in some places. And some of the downhill slopes along the creek stretch 500 yards.

Expecting 35 feet of buffer along the water’s edge to stop 1500 feet of momentum is ludicrous. The end result is tons and tons of dirt, limbs and leaves washing into the water, settling on the bottom and forever changing the fishery. Even in areas with regular current, this silt compounds until the water gets very shallow.

Silt buildup in the eddies 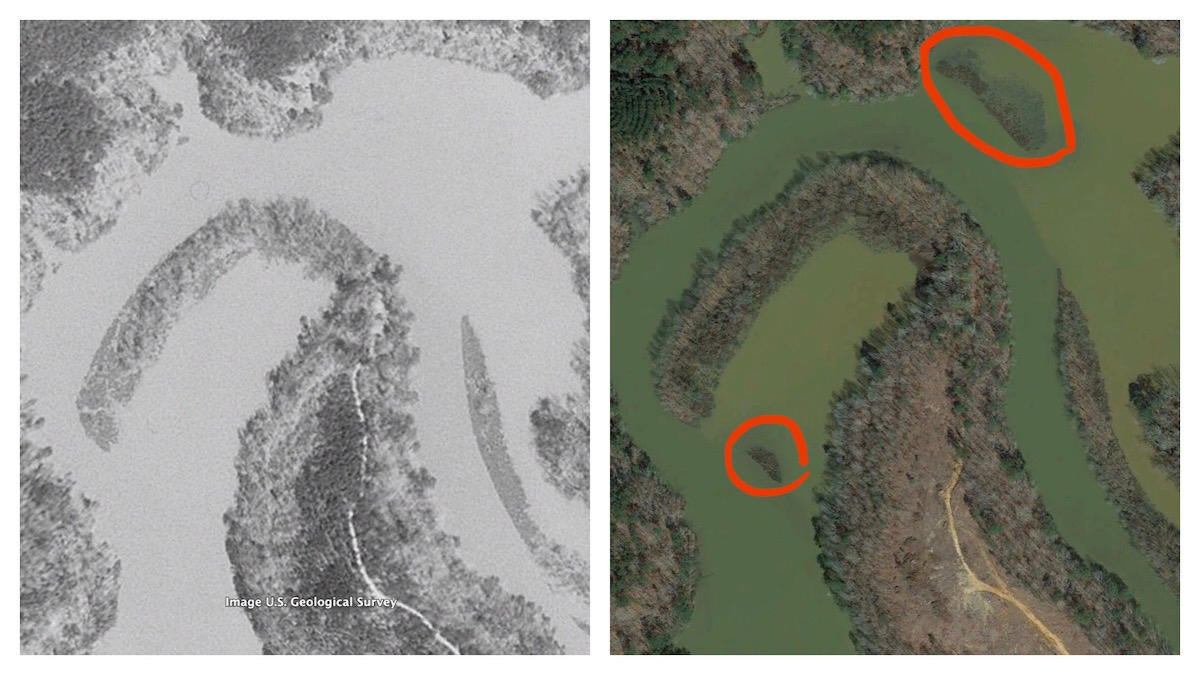 But in the eddies, the silt builds and builds until mud bars form and rise out of the water. Then grass starts to sprout on those mud bars. Then a couple years later, smalls trees take root. Then suddenly there’s an entire island or peninsula where there used to be five feet of water. In just the last 20 years, these two islands have risen from the water. The first picture is from 1998 and the second is from 2020. 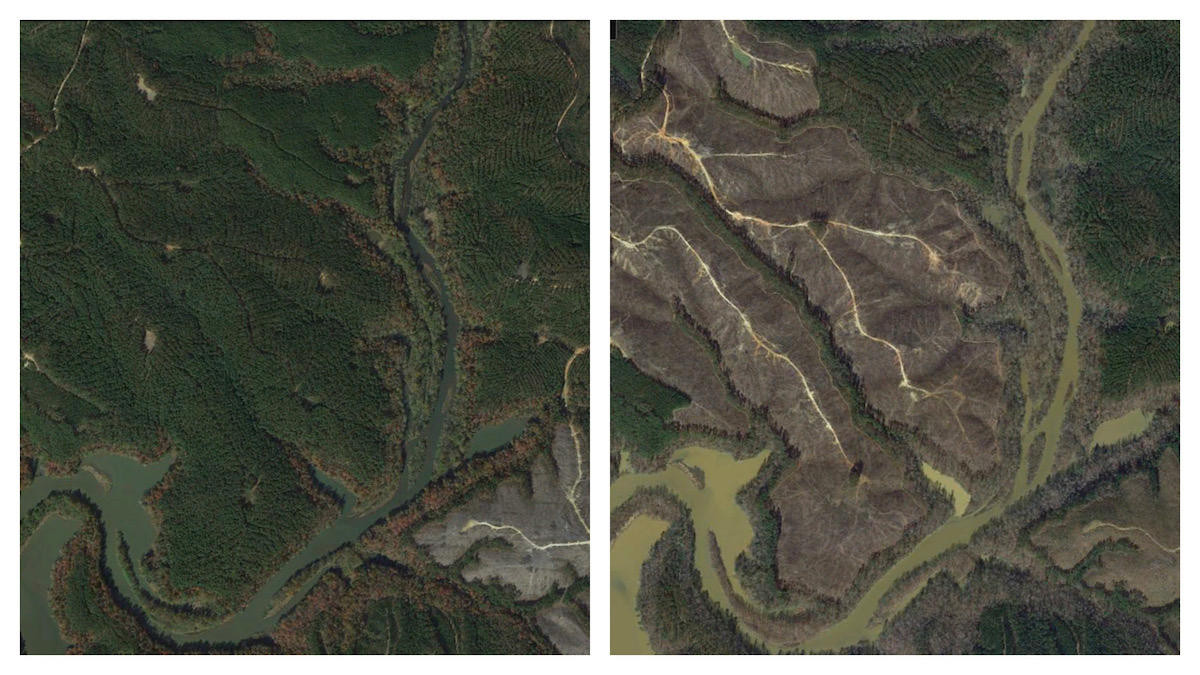 This is a problem that has no end in sight. And it doesn’t just effect my little creek here in central Alabama. This is happening all over the country and the world for that matter. And I’m partly to blame. We all are. Our consumption of paper products fuels the market and creates the demand. I remember complaining about how ugly a clear cut was to my uncle once and he said to me, “Next time you use the bathroom, try using a leaf. If you’re good with that then you can complain about the clear cut.”

Grotesque as that statement may be, it’s very sobering and illustrative. I believe we do overuse and abuse the resource, but even at the most basic levels if we did practice more conservation, we are very dependent on paper products in this society. Not to mention lumber as well. So I don’t want to just gripe and moan and offer no solution for the problem. Here are a few.

The obvious one is the one we just won’t do and probably never will. Stop using as much paper. Obviously if the demand drops, the supply will have to slow down. I think we are at least more cognizant now than ever before of paper consumption, so we have made some progress in that arena. But still, while I’m sitting here writing this I have a stack of junk mail consisting of unsolicited credit card offers, bank statements and bills that I never open because I use the apps on my phone. Completely idiotic wastes of paper that I can’t stop even though I’ve slowed down what I can with paperless billing.

The other problem with the “just stop using paper” solution is that we are all part of an ever increasing population. Even if we all cut our paper consumption in half, the population will double in time and we’ll be right back where we started. So yes, we have to do more individually to consume less. But that’s not going to do anything to address the specific issue of this piece. So back to the silt that’s already in the water.

No more deforestation on downhill slopes? 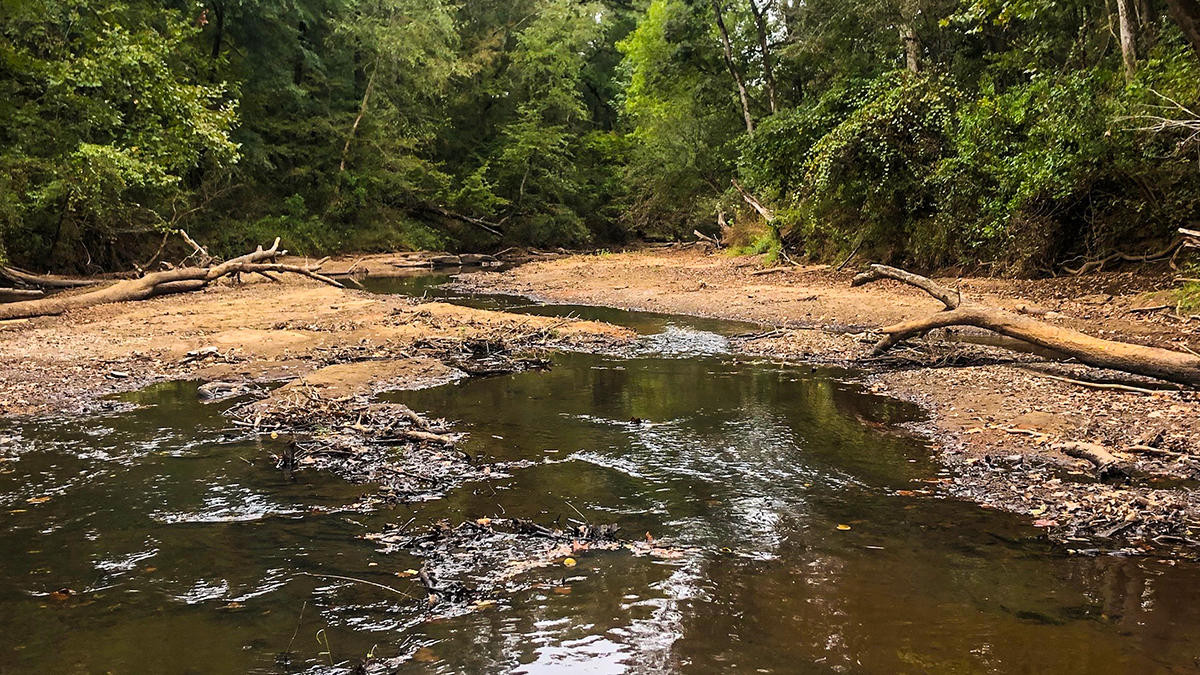 The obvious and only real method of removing the silt that is in the water now is dredging. Bring in pumps and barges and suck up the silt and hall it off. However this is extremely impractical. It would takes millions of dollars to do this in even a small creek like Saugahatchee and billions if not trillions of dollars to do it nation wide. Who would pay for that? It would bankrupt the paper companies if they were held responsible and bust our whole economy if we tried to use tax dollars to address the issue.

Even still, dredging would only work where the water was deep enough and wide enough to bring in barges. Once you work your way up into the creeks, you’d have to dredge from the shore and that would be even more detrimental to the environment. And say in an absolute perfect world where you did all of this and restored the entire waterway back to its former self, if the logging companies continue their current practices, we’d be right back where we are in a few years.

Which brings me to my next point and the only solution that is at least slightly realistic: Stop allowing deforestation on the downhill slopes that surround our creeks, rivers and lakes. This would immediately slow the silting in of the waterways and as the forrests are allowed to reestablish themselves in the areas where the clear cut has happened, new silt would gradually become less and less of an issue.

Obviously, people are going to still want to build lake houses. There will still be marinas and other businesses that want to build on the water. So there has to be some compromise there. Some trees will have to be cut down in the process. The answer I’m proposing is more to address the wide scale issue. Solve 85 percent of the problem in one fell swoop. Basically no tampering on a corporate scale with the forest in our watersheds.

But that’s going to dip into the pockets of a lot of people. That requires the government telling people what they can and can’t do with their property. And I don’t like that. But it may be a necessary evil in this situations to protect the resource.

Money and lobbyists are likely the reason the Environmental Protection Agency looks the other way on all of this now. The EPA will fine someone for cutting a couple of trees down in their yard if they’re along a drainage ditch but they allow this massive deforestation that is directly responsible for irreparable damage to our waterways to go on unchecked. It’s merely conjecture on my part, but it seems pretty obvious this should be on their radar.

We have to do what we can to stop this 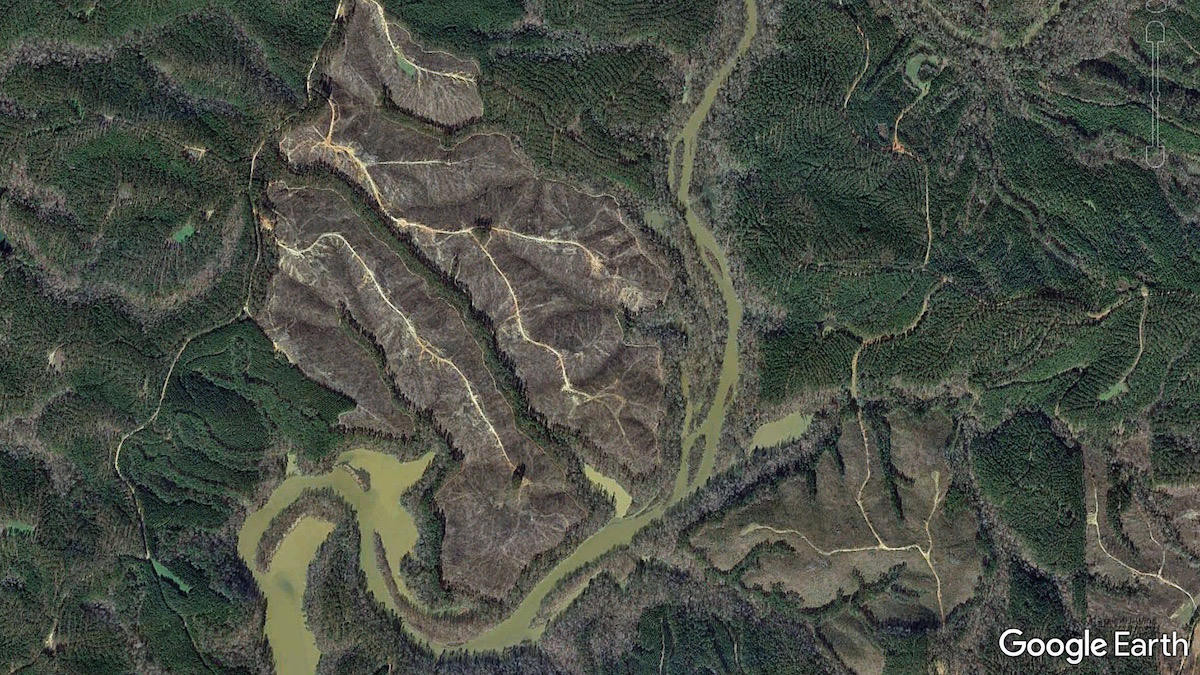 So we’ll see if this stirs up a few folks to rally for a good cause. My greatest weapon to combat this problem is that I know a few people who will publish an article about it if I write one. So I can try to shine a little light on the problem. Maybe some you are old school and still call and complain to your senators and congressmen about things like this. Maybe you’ll just take a look around and realize how much paper you use and try to modify your own lifestyle to help slow the issue down.

It’s something we should all try to do at least a little something about. There are places my granddad used to take my dad fishing when he was a kid that I never got to fish. He talks about them, and it hurts him to not be able to share them with me. For all of you who fish, you get that. And there are places I’ve fished with him that are already gone and I’ll never be able to share with my kids, God willing I have some someday.

My point is, this is a problem that’s not going to solve itself. And it will effect all of us that fish eventually. Fishing is getting more popular every year. You think the fisheries are crowded now? Wait until there’s only half the water and 10 times as many anglers in a couple decades. We have to do what we can to stop this. It’s as simple as that.