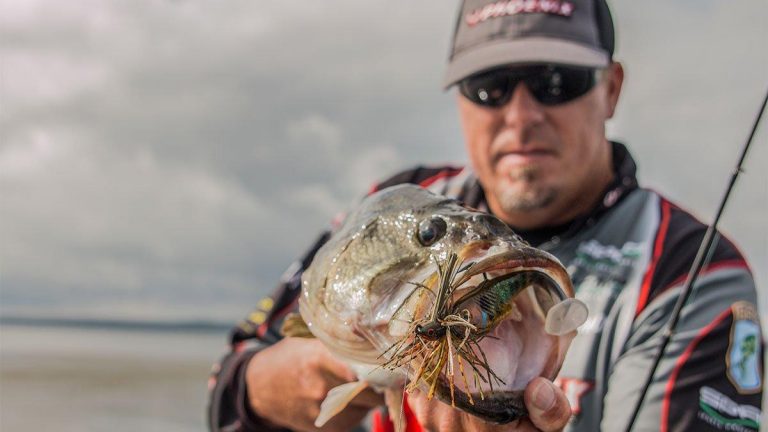 According to Elite Series pro Russ Lane, swimming a jig can be the key to increasing both the quantity and quality of your catch as water temperatures near the 65-degree range. If you can make an effort to find high-percentage targets, you’re likely to run across an excellent pattern most anglers fail to notice.

The 4-wheel drive of reaction presentations

Covering water is paramount throughout the fall monthsâ€”shad are migrating to the shallows and bass are constantly on the prowl for an easy meal. Swim jigs allow you to efficiently dissect large areas without the worry of hang-ups.

“You can fish a swim jig much more aggressively than most hard lures,” Lane said. “With a single hook point and a weed guard, I’m able to rip it through and bang it into cover to cause reaction strikes with very few snags. This allows me to cover vast expanses of water with fewer casts so I can quickly locate nomadic schools of bait and bass.”

Although swim jigs can produce great limits of bass throughout the entire season, there are several particular conditions in which they shine brightest. Lane believes it has everything to do with the relative “comfort” of the bass.

“I’m looking for conditions that will make the fish comfortable,” Lane said. “It sounds a bit strange, but wind, stained water and cloudy skies are three factors that make fall bass feel less vulnerable. And of course, the more comfortable a bass is, the more aggressively they’ll feed and chase a fast-moving bait.”

Color selection is actually quite simple for Lane. The entirely of his selection process boils down to two primary types of forage.

“If the water is stained, I tend to use a pearl white shad colorâ€”something a little brighter,” Lane said. “You’re generally moving reeling the swim jig at a pretty quick pace, so the bass aren’t getting a very good look at it. You’re simply trying to get their attention and force them to make a split-second decision.”

Don’t be afraid to shy away from the shad-colored swim jigs if you find yourself in clear water. Although shad are the prevalent forage throughout the fall, bluegill-colored swim jigs can be a much more natural presentation, less threatening choice.

“Bluegill shouldn’t be forgotten about,” Lane said. “They hang around the same type of cover that bass do throughout the autumn months and bass are incredibly opportunistic. If they’re suspended on the corner of a dock waiting for a ball of shad to pass, they’re not going to turn down an easy bluegill meal if the opportunity presents itself.”

Laydowns are no big secret among bass anglers, but these hotspots get very little pressure with swim jigs. Instead of winding a squarebill along the branches, an aggressively fished swim jig can pay huge dividends.

“I’ll go to the backs of creeks and look for fallen trees on the flattest banks I can possibly find,” Lane said. “I want the base of the tree to be in roughly one foot of water and the end to be sitting in about 3 feet. You can get bites on deeper trees, but your odds of running it right by a fish’s face skyrocket when you concentrate on the shallower laydowns.” 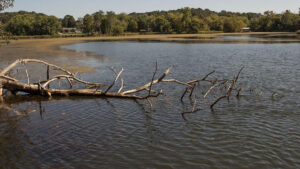 Lane fishes a swim jig in these shallow laydowns much like he would a squarebill. He’ll make long casts past the limbs and “hunt” the limbs with his jig. When he makes contact, he’ll drop his rod tip and shake the jig a few times before dislodging itâ€”that’s when the large majority of his bites occur.

“If you have a short strike or you’ve made several casts without a bite, try to slow roll that jig through the tree. I use a Big Bite Baits BB Kicker swimbait trailer on my Buckeye Lures J-Will Swim Jigâ€”or my homemade swim jig with a big 4/0 Gamakatsu hookâ€”and this combination really allows me to fish slowly due to its incredible water displacement.”

Big expanses of grass can be completely overwhelming at times. It all looks “fishy”, so where do you start? It’s all about the irregularities, according to Lane.

“When I’m fishing a big flat full of grass, I’m going to look two things,” Lane said. “I’ll either search for small points or V-shaped cuts in the vegetation. Think of where that fish is going to set up in order to best hide and ambush prey and it’ll become a much clearer picture.”

When approaching these areas, Lane will cast his jig past the tip of the point or past the tips of the two points that create the V-shaped cuts and barely tick the edge of the grass. When it snags in the grass, he’ll quickly shake his rod tip and pop the jig free. Just like the laydowns, this is when most of his bites will happen.

“If a fish is positioned on these irregularities, they’re in ambush mode and looking to feed,” Lane said. “If the fish weren’t aggressive, it would likely be buried under thicker vegetation. I’m specifically targeting active fish when targeting these grass lines.”

If you frequent fisheries laden with boat docks, there’s a great chance of finding a strong fall swim jig bite. Simply look for shallow, isolated docks near flats and cover water as quickly as possible.

“The ideal dock right now would probably be in 3 or 4 feet of water,” Lane said. “I’m going to attempt to knock my jig against anything I consider to be high-percentage. For instance, on wooden docks I’ll target corner posts and ladders and on floating docks, I’ll focus on the corners of the foam floats. I don’t always swim my jig down the entire side of a dock because again, I want to move quickly and make as many casts as possible. More times than not, you’ll find your biggest fish on the back corners.”