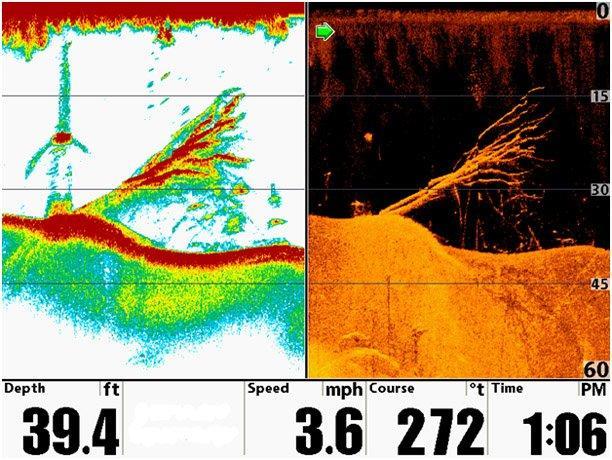 Professional bass fishing angler Koby Kreiger is a down-to-earth guy. He’ll tell you candidly that for many years deep-water bass fishing was outside his comfort zone.

“Like a lot of guys out there, my core strength is fishing shallow around visible cover,” Kreiger said. “So, for years I was a bit intimidated by deep late-fall and winter fishing. But all that changed when I started using Side Imaging. Now I can quickly find fishâ€”no matter the depthâ€”and put those fish in the boat.”

“There were so many boats in the D’Arbonne Bayou, I came up with another gameplan.”

So during pre-fishing, Kreiger scrutinized countless miles of waterway, scanning for submerged structure and baitfish on the edge of the river channel.

“This time of year bass key in on schooling baitfish, and on Ouachita, the bait was still out in the river channel, not back pockets like a lot of places this time of year,” Krieger said. “You could see it clear as day with Side Imaging. Then as the sun got higher and the temps came up you could visually see the bait move up in the water column on the screen until it was on the top of the water actually flickering around.”

With his Side Imaging set to 90 feet on each side of the boat, Kreiger would move his cursor over high probability timber as he was idling, marking tournament waypoints. Within a three-mile stretch of the river, Kreiger marked some 60 waypoints during pre-fishing and added another 30 during the four-day tournament.

“I had a really good track to fish, both going downriver and coming back up river. It was a pretty intense gameplan.”

And while Kreiger saw a few other competitors targeting standing timber in the same deep 30 to 60 feet of water, they missed the mark.

“The key wasn’t finding the visible timber but the ‘invisible’ wood around it,” says Kreiger. “You might have a few trees sticking out of the water, but the fish were holding to submerged trees around the visible woodâ€”stuff you just couldn’t see without Side Imaging.”

And it’s in this ‘invisible’ wood that Kreiger found bass suspending as deep as 15- to 17-feet over 30- to 60-feet of water in the mornings, rising to 4 to 7 feet below the water surface as the day wore on. He started each day with a custom Craig Power CP1 crank, and later moved to a 1/2-ounce War Eagle Spinnerbait and a Mini-Frenzy umbrella rig.

“I could see money fish on specific submerged trees and just knew I’d score on that particular waypoint,” he said. “I probably scanned 50 to 60 trees on that 3-mile stretch and 25 held fish, and of those 25 well over half you couldn’t see without Side Imaging. At the end of the day, 60 percent of my fish came off the invisible trees. Finding them was a huge deal. If you’re fishing a 3-mile stretch of river and there are only 10 visible trees, it’s going to get hit pretty hard. But you find another 20 trees that the other guys can’t see and you’ve got a game up on them.”

When asked why other competitors weren’t using Side Imaging, Krieger had this to say: “It’s easy to get stuck on fishing visible structure on river system tournaments. The Ouachita is a narrow river. Seems to me other anglers fell in the routine of fishing visible structure, outside bends and points. But I learned on Sam Rayburn recently that I could fish deep water effectively if I chose to â€¦ and I did.”

Today’s fishing electronics definitely “level the playing field” but Krieger believes it goes beyond simply having the electronics. “You have to know what you’re looking at. The people who know how to use their units will trump guys who just have the gear.”

The EverStart champ’s advice for learning your electronics?

“Take your Humminbird to places you’ve fished for years. Go to your favorite brush pile, rock pile, and weedbed and carefully look at how it appears on your screen. Make note of that so when you go to an unfamiliar lake, you know what you’re looking at. Put it in your brain so next time you’ll know it’s a brush pile. Definitely removes the guesswork. Of course, it’s pretty obvious with Side- and Down Imaging but spend time learning what various structure looks like on your sonar, too.”

From takeoff, Kreiger sped 58 miles downriver to the dam. “On day one and day three, it was so foggy I had a really hard time seeing in front of the boat. So I’d zoom in on my Humminbird GPS screen and follow my practice route to make sure I was in the middle of the river and out of harm’s way.

“Also, since it was such a far run, I had strategically-placed waypoints throughout the river, knowing if I pass a specific spot I’ve got an hour, a half hour or 15 minutes left to fish. The GPS was huge in making my gameplan pan out.”

He also cites precise boat control as aiding to his win. “It was a barrage of bouncing off one stump to the next. The Minn Kota 101 Fortrex took it all like a champâ€”never had any equipment failure, to the prop, shaft, anything. Solid.”

“And there were a few times when I was out over 40- to 50-feet and I put my Talons down to hold me in some standing timber so I could fish the next tree down without having the wind blow me into the spot. For example, if I caught a fish and went back to cull it, I could’ve blown out my next spot, but with the Talons down, holding in a treeâ€”which a lot of people don’t think of, especially in deep waterâ€”I could maintain precise boat control and stay on fish.” 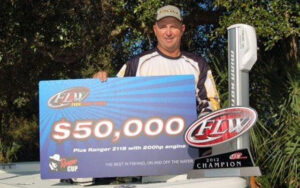