I love to be outdoors as most avid anglers do. This weekend was an amazing 10 hours on the water. We didn’t set any world records but when you’re catching nearly 7-pound bass and 20-plus-pound limits on a new technique, it’s a lot of fun.

But fishing ebbs and flows. For every good day, there’s at least one bad day coming in the mix. However there is another adage that says the fish are always biting somewhere. Many like to believe that the fish aren’t merely biting somewhere, they are actually biting a certain thing somewhere. The fact is, at times, on good fisheries, the fishing can get downright tough.

But it’s not the end of the world. There are ways to catch them when the power methods fall by the way side and the mood of the fish goes from Quarter-Pounder gorging to finicky celery eating. Obviously it requires a little more finesse and a little more refinement to milk the bites from fish who seem intent to not eat for a while.

The shaky head has become a staple of the anglers targeting weary, pressured, weather afflicted bass. It’s a good tool for getting a few more bites when the bite gets tough. The Senko is another. Both lures have become staple techniques for folks to get a few bites when the bite is tough

A more recent melding of ideas called Flick Shaking was introduced several years ago. Known as Inchy Wacky in Japan, the rig consists of a uniquely shaped soft-plastic worm like the Jackall Flick Shake worm rigged wacky style on a unique short hook jighead. The jighead really isn’t used to move the lure along as much as it is to move the bait in place.

The weight fulcrums around the plastic almost levitating in orbit around the worm as you shake it and dance it in place, causing the ends of the worm to quiver and flap. As the bait falls, the unique head pulls the worm down forcing water over it’s uniquely shaped ends that quiver through the water column attracting fish with it’s subtle but noticeable action.

We recently spent the day on Weiss Lake with several pros and guides from Alabama. Weiss is a very unique fishery. The community almost seems like it’s built around the water and in the summer more folks drive house to house by boat than by car. That means the lake is full of docks. But it’s also full of crappie, largemouth and spotted bass.

The lake can produce some behemoth spotted bass and big crappie around the docks and on the various points and stumpy river ledges. Four guides and professional anglers split up on the lake recently and started dissecting it to find some tough bass fishing after a fall cold front rolled through the area. The bite had changed a lot and the fish that did bite, really bit funny, seemingly just mouthing the baits and never really taking a lure and running with it. 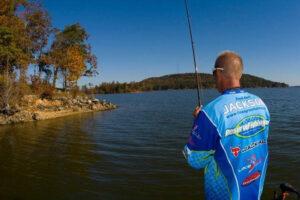 The morning bite was tough for most with one fish or two. Chris Jackson, a guide on Lake Guntersville and touring bass fishing tournament angler however figured out how to catch a limit of Weiss largemouth and spotted bass using a Jackall Flick Shake on a Jackall Wacky jighead. He caught several bass to 3-pounds in the morning and then again in the afternoon.

The biggest question we had was why the Flick Shake?

“It seems to draw more bites because still not a lot of people throw it, so the fish haven’t seen it as much,” Jackson said. “I noticed the vertical fall that it had. Then the way the head pulls it and the shape of the worm makes it shimmer and draws attention. I think half the fish eat it out of curiosity than hunger.”

Jackson fishes the rig all year long, on any fishery during any condition he thinks the fish get a little finicky. But he does have his favorite situations for breaking it out.

“Fishing docks is probably my favorite situation for using it,” he said. “Or when there is no action. The fish just seem to quit biting, I’ll change gears and go back through with the Flick Shake and start catching them again.

“If the fish are suspended it’s really incredible. It works really well on deep suspended fish in a vertical presentation. The head will rotate around the worm and tumble and that action seems like it really triggers them.”


There are some subtle nuances about fishing it correctly. It’s made to be a drop bait. Not a drag along the bottom type of bouncing bait. Jackson likes to cast it out to brush or structure and let it fall on slack line, carefully watching for the tell-tale jump of the line for a bite. If he doesn’t see his line jump on the fall or start swimming off and tightening up, he lift up slowly on the rod tip and just check it for weight before he moves it.

Then he’ll hop the head with several subtle upward twitches of his rod and then let it fall again on slack line. If still nothing takes the worm, he reels it up and makes his next cast. He’s looking to put it in a prime location and get a fish to react to it’s subtle falling action.

He’s able to detect the slightest of pressure changes, ticks on the line and mouthing fish that aren’t really aggressively taking the bait. He likes a 3/32-ounce head best for fishing this technique, but will go up to a 1/8-ounce if it gets a bit windy. 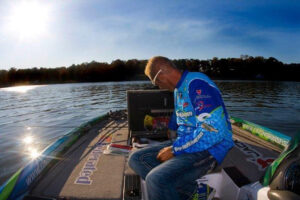 “The key to it is to not overfish it,” Jackson said. “Let the worm and head do the work for you.”

This year at the Neely Henry PAA bass fishing tournament, most of the anglers found the bite pretty tough. Jackson had about 6 pounds on a shaky head after hitting a few sections of docks. He knew the fish were there, so he turned around and hit the docks again, this time with the Flick Shake. He culled every fish he had on the next pass. Then he moved to the first section of docks he’d fished that morning and caught a bass nearly 5-pounds that turned around a tough day of fishing.

The Flick Shake can seem like an intimidating ultra-finesse presentation for finicky fish. But if anglers will give it a chance and don’t over think it too much, it can really produce when nothing else will. I know three other boats caught one or two bass on an uncharacteristic day but the Flick Shake produce nearly two limits of keepers in one boat. 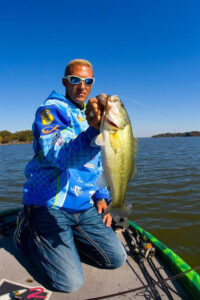