I’ve started performing two simple frog modifications and one hookset adjustment that have dramatically increased my froggin’ success and eased my heartache.

Take pliers to it

It’s tough to take a set of pliers to a brand new frog, but I’m telling youâ€”it’s worth it. My outright favorite frog is the SPRO Dean Rojas Bronzeye Poppin’ Frog. While you can definitely catch some bigguns on it right out of the package, a very simple tweak can double your hookup ratio.

If you’ll notice, the hook point of most frogs barely touch the body of the bait. This miniscule contact point is meant to shield the hooks from thick cover, but can also impair your ability to get a good hook into the bass. I like to grab the bend of each hook with a sturdy set of pliers and slowly pull the hook points outwards and away from the bodyâ€”not too much as to make the frog more prone to hang-ups, but about 1/16-inch. No more, no less.

While I’m sure it sounds like I’m splitting hairs by making such a small, 1/16-inch adjustment, you will stick more fishâ€”period. I am as hard-headed as they come, but after my buddies pounded it into my skull enough, I finally tried it and have been hugely impressed by the results. 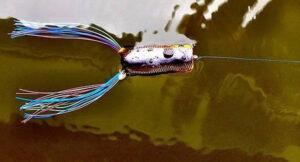 Give it a haircut

Yep, I’m giving you an excuse to let your “inner hair stylist” come out a bit. Many of today’s topwater frogs have living rubber legs attached to the back. These crazy things quiver and palpitate in the water even when the frog is at rest, producing some mammoth blow ups.

I’m a big proponent of differentiating your baits from the thousands of commonplace, everyday baits that fish see every day. Fish see a lot of frogs that walk, and they also see a lot of frogs that pop. If you combine those two actions, however, the fish probably haven’t seen a frog that pops as it walks! I’m starting to sound like Dr. Seussâ€¦

To give your frog some awesome added action, simply stretch both legs out straight and trim about one inch of the living rubber off of just one of the legs. Make sure to discard of the excess rubber responsibly by not polluting the lake with it. The uneven leg lengths will allow your frog to walk back-and-forth with the slightest twitch of your rod tip, while remaining almost stationary. This is great when targeting small holes in thick grass, as you can work the frog in small areas for longer periods of time, giving the bass a better look at your bait.

As much as I hate to admit it, I still make this mistake from time-to-timeâ€”when it’s time to set the hook, I swing my rod to the side, not upwards. There is not a quicker way to miss a frog fish.

Think about it like this: When you set the hook to the side on a frog, the frontward-facing hooks don’t have anything to grab on to. Instead, you end up pulling the hooks away from the fish, instead of into the fish. Often, when I make this mistake, I lose my fish. In fact, I got so frustrated with losing frog fish, I completely quit throwing frogs in tournament situations for about a year.

My confidence was quickly regained, however, when I started training myself to set the hook in an upward motion. To be honest, it was pretty awkward at first, but it became second nature in no time. With an upward hookset, you allow the plastic body of the frog to compress against the top of the bass’ mouth, giving the hooks a chance to do what they do bestâ€”puncture flesh. When the hooks penetrate on an upright hookset, they pierce the hard, bony flesh at the top of the fish’s mouth, therefore ensuring a rock-solid connection between you and the bass.