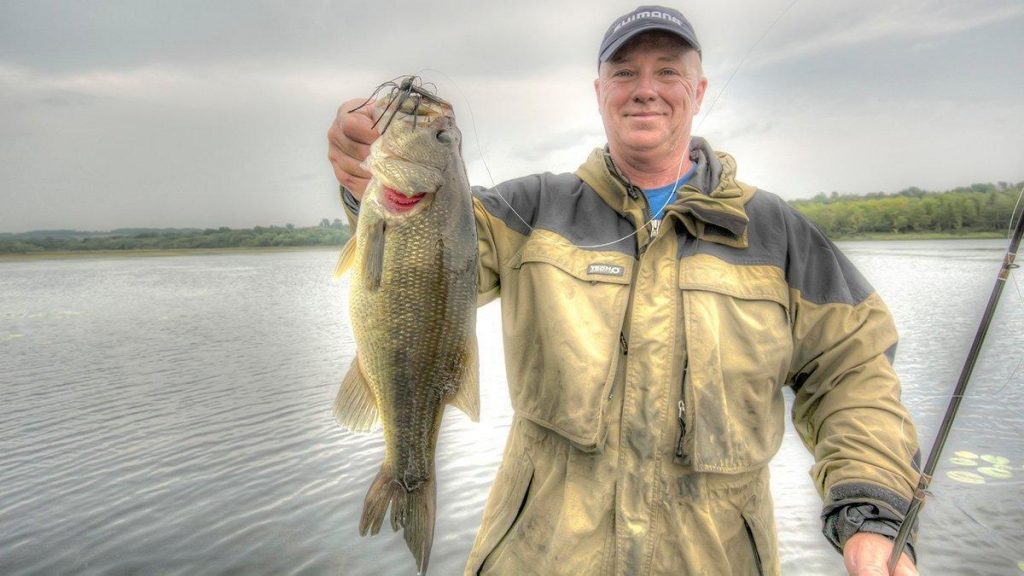 “In late September to early October, largemouth bass make a mass exodus out of bays and hold tight to the transition area between the slack water of the bay mouth and the river current,” said Rick Klatt, who’s house sits on the shore of the Ottawa River. Klatt’s spent more than four decades fishing the river for pleasure and competitively in tournaments.

“Fall can be the best fishing of the year. It’s a real bonanza.”

The following 3 sections breakdown where to find and catch big largemouth bass from rivers in the fall. 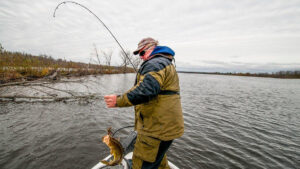 There is more to a largemouth’s departure from shallow bays than following food and avoiding chilly water. Wintering in bays across the ice belt can be deadly. Thick ice can lock bass into backwater areas. Winter kill occurs when oxygen levels drop to lethal lows. Bass instinctually seem to know to flee shallow bays in autumn. 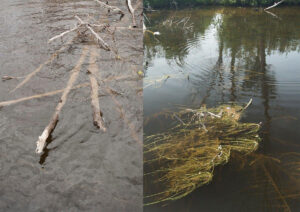 Largemouth leaving bays travel no further than needed to stay close to food and cover. In early fall, Klatt catches bass from the transition zone between the slack water of a bay mouth and the main river current. Grass lines, rocks, timber, sand bars and points located within this zone hold largemouth.

“Most of the largemouth leave the large spawning bays and swim upstream,” Klatt said. “These fish will position themselves close to the bay mouth for weeks and slowly advance upstream.”

Largemouth stay in these areas, eating panfish and minnows. They linger near bay mouths initially to follow bait should it returns within a bay. This can happen during mild spells in early autumn.

“Fish now have moved some distance from the bay mouths and have positioned near current breaks close to deeper water,” Klatt said. “I believe they’re moving to their wintering habitats and also following the baitfish. The fish seem to tuck themselves tight to the rock and near bottom along a sharp drop off anywhere from 6 to 12 feet of water and will face upstream to ambush whatever comes over the rocks.” 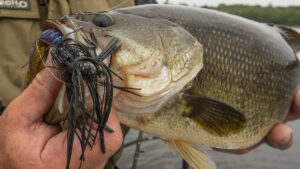 Leap-frogging river spots demands assorted lures for different structure and cover. For instance, Klatt may fan cast a spinnerbait over a grass line, while moving upstream towards a fallen tree. Once at the wood, he’ll dissect the timber with a flipping jig or bulky plastic. But, he sticks with these 6 reliable lures for largemouth in fall in rivers.

“I have been successful going with the wind and current and covering literally miles of water,” Klatt said. “In good areas, or where there are numbers of fish, I will swing back up into the current and fish more thoroughly usually with a jig or stick bait.”

Spinnerbaits work later in fall, but slow retrieves are the norm. Use a heavier model for deeper bass.

To dissect standing timber or fallen trees, begin downstream and use the electric motor to creep towards the cover. This provides better boat control and more precise tactics than drifting downstream.

Flipping jigs and creature baits are tied to 50-pound Tuf-Line braid for heavy cover and timber. He will drop to 25-pound Seaguar fluorocarbon if fish get fussy or in lighter cover.

The fast-sinking 6-inch Bass Magnet Quiver Daddy’s another good choice. It’s Texas rigged on a Trokar Magworm 5/0 wide-gap hook and fished on 20-pound mono and a 7-foot, 6-inch medium-heavy casting rod. This stickbait slides through cover with ease. Black and blue is a reliable on most rivers.

Klatt casts upstream and perpendicular to a grass edge. The stickbait quivers temptingly while sinking in current. When it touches cover, Klatt raises it a few feet. Then it glides and drops again.

The Quiver Daddy’s also pitched ahead of wood cover on a 45-degree angle. Then covertly drifted under laydowns and flooded timber.

Crankbaits with a tight wobbling action are equally deadly for bass in fall. River anglers should have a selection of crankbaits for different depths. Klatt finds 4 to 6-foot runners work well in early fall, while 8 to 12-foot diving cranks later in the season.

Casting a square-bill crank around timber’s another effective tactic. Making the lure hit the wood gets a bass’ attention and triggers reaction strikes.

Rivers are often said to be underutilized by anglers. Nowhere is this more true than during cold water. Don’t ignore these bass factories this fall. Locate shallow, spawning bays and look upstream for trees, grass and rocks where largemouth stack-up after leaving shallow bays. Bring a handful of Klatt’s top baits and you can bet you’ll be posing for a photo with a brace of fat largemouth from your favorite river this fall. 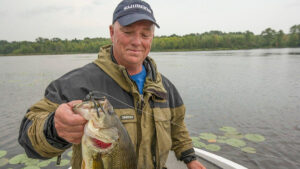