It’s no big secret that the shad migration is a major point of focus throughout the autumn months. They’re in the process of making their annual voyage to the backs of creeks and of course, hungry bass are hot on their tails.

Case in point: Weighted Texas-rigged soft jerkbaits. Elite Series pro Shaw Grigsby has enjoyed tremendous success by flipping, pitching and even casting this rig to wary bass looking to ambush unsuspecting shad. You won’t see many anglers doing it, but that might just be what makes it so darn effective.

We hear it all the timeâ€”bass don’t get big by being dumb. While there’s no shortage of suitable forage this time of year, the largest bass in a given area aren’t always willing to expend a large amount of energy for just a single shad. That’d be like a hungry human running three miles to eat a potato chip. It just doesn’t make sense.

“Soft jerkbaits are just so incredibly effective this time of year,” Grigsby said. “They have a near-perfect size and profile. When you add a weight to a Strike King Caffeine Shad, it looks just like a dying or severely injured shad. And you know what that means: Easy pickings for fat, lazy bass. They don’t have to spend hardly any energy to choke it down, so it’s a win-win for them.” 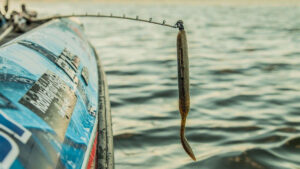 In addition to lifelike appearance of this rig, Grigsby believes that the large majority of bass are totally unfamiliar with it. They’ve seen countless soft jerkbaits darting and dashing above their heads, but very rarely do they see one lackadaisically dragging or hopping on the bottom.

“I really think bass get conditioned to particular presentations rather quickly,” Grigsby said. “So anytime you don’t have a bunch of other anglers doing something, it’s going to be much more productive. You’ll often see bass swipe at and miss weightless soft jerkbaits, but when you add a weight to the equation and get that Caffeine Shad on the bottom, the bites are absolutely incredible. You wouldn’t believe how vicious they can be!”

The life of a shad can go from “great” to “terrible” within a matter of days throughout the fall months. During their migration, they’re fat and happy while chowing down on plankton and thenâ€”poor little guysâ€”that first cold front hits them like a sack of bricks. What once was a five-star buffet quickly turns into a fight for their lives.

“Weighted Texas-rigged soft jerkbaits work wonders in the fall anytime the water temperatures are above 60 degrees,” Grigsby said. “But they’re often at their best when the water dips down into the 50-degree range. Whenever the first cold front hits, they immediately start dying off and the bass will gorge on them. This rig is a perfect emulation of a shad shocked by the cold temperatures.”

Fortunately for us, locating and identifying a solid bite isn’t rocket science this time of year. We already know two very important things: Both the bait and the bass are shallow and likely to be found in the backs of creeks. From here, it becomes a matter of simply finding the preferred ambush points of the bass. 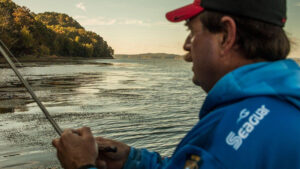 “Most often, I’m looking for edges of Hydrilla, weed lines and grass lines,” Grigsby said. “I’m covering a lot of water in the back-halves of creeks and putting my bait around any irregular piece of cover. It can be holes in matted vegetation, small pieces of brush or even docks. Just remember to pay attention to your bites. This technique can be fairly easy to pattern.”

After years of experimentation, Grigsby has found “the right” equipment combination for flipping weighted Texas-rigged soft jerkbaits. It’s incredibly simple and easy to duplicate on your ownâ€”even for beginners.

For the majority of his fall-time applications, Grigsby relies on a 1/4-ounce or 5/16-ounce Strike King Tour Grade Tungsten Weight. If it’s necessary to punch through thick grass, he’ll occasionally upsize to a 1-ounce or 1 1/4-ounce sinker, but these situations are few and far between.

“I always leave my weight unpegged with I’m fishing this rig,” Grigsby said. “I want the weight to hit the bottom first so it looks like the minnowâ€”my Caffeine Shadâ€”is chasing something. It can really trigger an aggressive, competitive bite. Not to mention, an unpegged weight is less likely to get inhaled by the bass, which leads to a much higher hookup ratio.”

Grigsby prefers a wide gap hook, such as a Lazer Trokar TK120, for most scenarios. This particular hook has an abrupt 90-degree bend that holds the bait in place when pitching, flipping and even casting to isolated cover. If the fish are holding in super-thick vegetation and a big weight is necessary, he’ll switch to a straight-shank hook such as the TK130.

“There’s no need to overcomplicate your line choice,” Grigsby said. “I’ll use fluorocarbon line 99 percent of the time, and it will be somewhere between 15 and 20-pound Seaguar AbrazX or Tatsu depending upon water clarity and surrounding cover.”

Choosing the most productive soft plastic color can become overwhelming at times, but Grigsby prefers a more straightforward approach.

“I actually prefer green colors such as green pumpkin and watermelon when the water is clearâ€”even when they’re feeding on shad,” Grigbsy said. “For whatever reason, these subtle green hues tend to produce a lot of bites. If the water is off-color or I’m fishing in overcast conditions, however, that’s when I’ll break out the shad colors, such as Pearl Blue.”

Don’t be afraid to go against the grain this fall. While other anglers are concentrating higher in the water column, you’ll find a lot of success with the weighted Texas-rigged soft jerkbait. Not a lot of folks do it, but that just means more awesome fishing action for you.