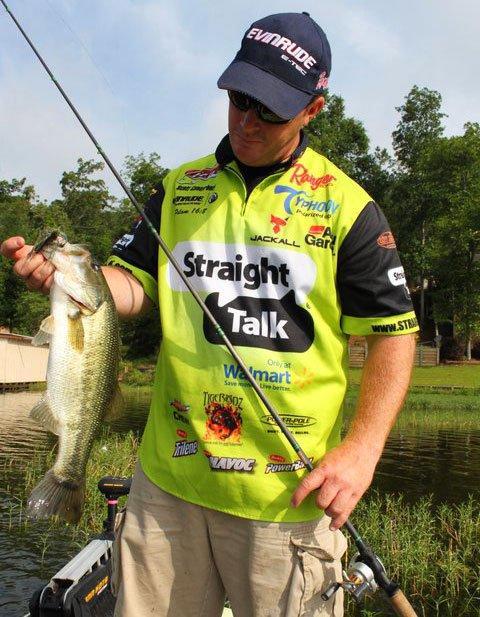 Fall is finally here. As the air temperatures plummet so too does the warmth of the water. And with cooler water come shad. Big balls of beautiful shad running for their life just below the surface. But it’s what lurks a few feet beneath that light ripple that builds anticipation with anglers. When a bass’s mouth meets the top of the water and snaps shut around a shad, it’s pure music to an angler’s ears.

The sudden eruption of a busting bass has turned many an anglers’ head with a sudden jolt. This reflex is known well by Straight Talk pro Scott Canterbury. He cut his fishing teeth capitalizing on these frantic feeders along the shad infested shores of Logan Martin. Fishing for both spots and largemouth feasting on this forage in the fall, he’s found there are times when catching them isn’t as easy as one might think.

Matching the hatch is something that anglers have done for years in order to catch fish whether they are relating to bream, crawfish, shad or some other forage. This approach, however, is not always best when targeting schooling fish early in the fall.

As the fall begins, shad will often out run the bass to the shallows. This creates a bit of a problem. When there’s a ton of shad shallow and only a handful of predatory fish, matching the hatch is not the best bet. There is no reason for a bass to eat something that looks almost like the real thing when the real deal is so prevalent. Instead Canterbury will go with something a little different.

“You can’t compete with the real thing when they can get it that easily so I’ll use a lot of the same shad imitating baits but I might go with an off the wall color like chartreuse.”

At times like these, the best bait to catch fish relating to shad may not be a shad imitating bait at all.

“There’s times when you can actually catch schooling fish by throwing something like a Carolina rig with a finesse worm on it better than you can catch them on a shad imitating bait,” Canterbury said.

Wind, or the lack there of, will also play into Canterbury’s decision to use more of a finesse approach. Calm conditions make bass more likely to second guess an angler’s offering. Canterbury not only opts for the Carolina rig to catch the more wary bass but may also employ a fluke or scrounger. These baits offer a less intimidating option and an easier target for an already stuffed bass.

One might think of these finesse baits as the “cheese puff” of a bass’s diet. Bass are opportunists by nature, a lot like humans. It doesn’t matter if I just had a 16-ounce ribeye, if someone offers me a cheese puff, I’ll typically take it because you never know when that next cheese puff will come along. If you’re not a fan of cheese puffs, then feel free to plug your favorite delectable vice into this analogy.

There comes a time, however, when steaks, shad, become a little less available. More and more bass move shallow as the fall progresses. Once more bass find the shad, they become a little easier to catch. This is when matching the hatch with moving baits takes precedence. The larger number of bass creates competition and suddenly bass are a lot less picky.

Lipless crankbaits, shallow running crankbaits, topwaters and jerkbaits all offer viable options for bringing in bass when they are feeding below the surface.

Chasing schooling fish on a flat or in open water can drive an angler mad and burn up a set of trolling motor batteries. A lipless crankbait offers a great option when the bass are popping up in several locations.

Not only does it have the profile of a shad but it can also be fished at a constant level helping pick apart the strike zone. But the most appealing characteristic of these baits is their ability to reach the fish. For this reason Canterbury prefers the Jackall TN60 and TN70. These baits have a built in tungsten lip and this little variation helps him fire the bait even further which can really make a difference with hard to reach fish.

Flat sided, shallow running square bills like the Jackall Bling 55, Strike King 1.5 and Spro Fat John are also great options. Not only do they mirror the profile of a shad but they also offer the erratic action of fleeing baitfish. These are great baits to use when the shad are around cover like laydowns, stumps and rocks. They do a great job of bouncing off the cover and imitating an injured shad.

Whether Canterbury is fishing lipped or lipless cranks, one thing he always varies his retrieve. Pumping, twitching and pausing the bait can add to that erratic action and make the bait stand out from the other shad. However the most important part of the retrieve is the speed.

“Speed is crucial in the fall,” Canterbury said. “Sometimes fish can see your bait too well. A lot of people think they are fishing it too fast, and they’ll slow down and can’t get bit. You’re not fishing it fast enough a lot of times.”

Canterbury will also throw a jerkbait much earlier in the year than many anglers. It’s something that he has a lot of confidence in and is another great shad imitation.

Sometimes there can be hundreds of fish in an area. Although this offers a lot of excitement for the weekend angler, it can become an issue in a tournament situation where so much time is wasted digging treble hooks out of non-culls.

There are a few baits that can be used to pick the bigger fish out of a school. Targeting the schools with a 5-inch swimbait or spinnerbait can deter some of the smaller fish. This approach may result in fewer bites but can produce some of the better fish.

When targeting schooling bass in the fall, it’s best to remember that matching the hatch isn’t always the best bet, especially early on when the number of bass pales in comparison to the number of shad. Sometimes bass fishing with something a little different or a little more subtle like a Carolina rig or a soft plastic jerkbait can be just enough to entice the more finicky bass. Once more bass find the shad, your moving baits are a great option but shouldn’t be simply cast and reeled. Experimenting with the retrieve will help determine exactly how the bass want the bait that day.