Bass anglers are often under the impression that gin-clear water means one thingâ€” spinning gear, light line and subtle presentations. Heck, you can’t really blame us. That’s what many of us were taught growing up and it works a large percentage of the time. So why change?

Elite Series pro Chad Pipkens doesn’t always follow the age-old rules of bass fishing. He’s a powerhouse when it comes to clearwater fishing and believes cranking to be a widely overlooked technique. Although he still fools these wary bass on finesse gear at times, a lot of his biggest and most memorable catches come on crankbaits.

A proactive approach leads to efficiency

Eliminating dead water is a major factor in bass fishing. It’s tempting to imagine a big bass sitting on every piece of good-looking cover, but unfortunately that’s not reality. In order to quickly develop a productive pattern, Pipkens uses a crankbait to take matters into his own hands.

“Popular clearwater techniques such as jerkbaits, drop shots and shaky heads relinquish a lot of control to the bass,” Pipkens said. “They’ll catch fish, but you’re relying on the fish to come to the bait. Crankbaits, however, allow you to bring your lure to the fish and, in a way, force them to react. So when I’m looking for a pattern in clear water, you can be sure I’ll have a crankbait tied on because I can cover water quickly and find the most active bass in a given area.”

Did you know? Pipkens won the 2014 B.A.S.S. Northern Open on Lake St. Clair and clearwater cranking played a major role in his victory. In fact, every bass he weighed-in was caught using this technique.

Just as he’d bang a squarebill into cover in dirty water, Pipkens uses a very similar approach in clear water. He has most of his success by making repetitive casts to very specific pieces of cover. Even if the bass aren’t actively feeding, he believes the “irritation factor” can play a big role in drawing strikes from lethargic bass.

“It can be tough to make inactive, clearwater bass bite with traditional tactics,” Pipkens said. “You can wiggle a drop shot in a bass’ face for what seems like an eternity without getting a bite. But if you make repetitive casts with a crankbait and consistently deflect the lure off of nearby cover, there’s a good chance you’ll irritate the fish enough to where it can’t stand it anymore.”

Focus on the high-percentage areas

Although clearwater cranking can be incredibly effective this time of year, it’s still very important to understand when and where to utilize the technique. Because many late-fall and early winter bass are actively moving to and from shallow water to capitalize on migrating forage, Pipkens makes a concerted effort to target strategic ambush points the bass are likely to use for feeding purposes. 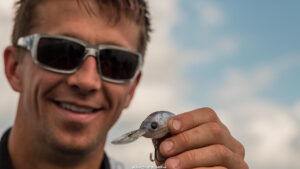 Selecting the “correct” crankbait on the water can be a bit overwhelming at times. When you open your tackle boxes and have dozens of different colors, shapes and sizes from which to choose, it’s tough to make up your mind and have confidence in your decision. Fortunately, you don’t need to get too carried away with your selection process when you’re clearwater cranking.

Pipkens looks for three primary characteristics in his crankbaits.

Be cognizant of your retrieve 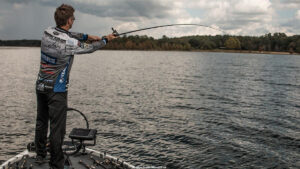 Perhaps the biggest misconception of crankbait fishingâ€”whether you’re in clear or dirty waterâ€”is the belief that the lure will do the work for you. Sure, you’ll find some crankbaits that hunt throughout the retrieve or kick to the side after colliding with cover, but it’s imperative to actively use both your rod and reel throughout the entire retrieve.

I was recently in the boat with Pipkens watching him crank the Damiki DC300 in clear water and I’ll be honestâ€” “focused” would be an understatement. With every deflection, wobble and turn of his reel handle, he actively analyzed the crankbait’s behavior and was able to develop a productive pattern with ease.

According to him, there are two types of retrieves you should try the next time you get on the water.

The next time you find yourself in clear water, don’t be intimidated. If you can make a point to keep your spinning gear in the rod box and commit your day to a small crankbait, you’ll have a great chance of catching a solid limit of bass.