Feast or famine. Hero or zero. Jekyll and Hyde. Whatever you want to call it, that’s fall bass fishing for many anglers. Not only do these bass have a one-track, shad-oriented mindset leading them to nomadic feeding behavior, but autumn’s frequent cold fronts can totally wreck your plans of quick limits and full livewells.

There is, however, a potent one-two punch that Elite Series pro Shaw Grigsby frequently relies on throughout the season. Whether you’re dealing with skyrocketing barometric pressure or gypsy bass living life on the run, this combination can be your saving grace when the bass make your head spin.

There seems to be two very different opinions when it comes to shaky head fishing— there’s not much middle ground among bass anglers. Some believe this jighead and finesse worm concoction only catches small fish while others have caught some of their biggest bass on it.

Over the years, Grigsby has become a big believer in this widely misunderstood technique for both numbers and quality.

“Fall bass can get so unbelievably focused on shad that it can be very difficult to get consistent bites on shad-imitation lures,” Grigsby said. “They have so much of the real thing and it’s very hard to contend with. But if you can get underneath the big balls of shad with a shaky head you’re able to target the larger, more lethargic bass. When it’s super-tough to get a bite around lots of shad, this is as close to a guaranteed fish catcher as it gets.”

In addition to being a reliable remedy for an overabundance of shad, shaky heads also give Grigsby an opportunity to counter the nasty cold fronts for which the fall season is known. Before these fronts “hit” an area, the barometric pressure drops dramatically, creating miniature feeding frenzies across the lake. More times than not, this leaves post-frontal bass with full bellies and a stubborn case of lock-jaw.

“When the barometer gets sky-high after a front, the fish are always going to be a bit tougher to catch,” Grigsby said. “When you compound that with almost too much live forage in an area, things can get really frustrating for fishermen. But the shaky head is an incredible natural, unassuming presentation that you can leave in the strike zone for a long time. So even though the bass may not jump on it right away, if you keep it in front of them long enough, they’ll eventually eat it.”

Docks— Grigsby has caught lots of giant bass on docks with shaky heads throughout the fall months, so it’s hard for him to pass on a good-looking dock without making a few casts. Instead of fishing the outside edges, he’ll target the first pole right off the bank. The bass tend to use walkways as strategic ambush points and it allows him to cover water efficiently and locate the bass that are actively feeding.

Bridges— Bridges often cut through the middle of creeks, making them a very natural funnel point for bass moving to and from shallow water. Both the bass and shad have to pass through these areas during the fall migration which creates a high-percentage concentration point. Not to mention, rocks hold heat very well which is incredibly advantageous as water temperatures plummet in the latter part of the fall season.

Walking through the aisle of your favorite tackle shop can be intimidating at times— especially when you’re trying to select the “right” shaky head. You’ll find all kinds of head shapes, head sizes and line tie angles from which to choose, but Grigsby makes an effort to keep his selection process short and to-the-point.

3/16-ounce— “A 3/16-ounce Strike Tour Grade King Shakey Head is always going to be my first choice,” Grigsby said. “If you dig through my boat, you’ll always find one tied on because it’s an all-purpose size that will cover almost every situation. I can skip docks with it, fan cast it on gravel banks leading to shallow flats and even drag it through mid-depth brush piles where those big, loner bass tend to hang out.”

1/8-ounce— Because riprap bridges are such a big part of his fall strategy, Grigsby keeps a few 1/8-ounce shaky heads in his boat for this situation. Heavier shaky heads tend to punch into the crevices between the rocks and increase hang-ups and line abrasion, so he opts for a lighter head in order to target chunk rocks more effectively.

1/4-ounce— It’s incredibly important to maintain bottom contact which shaky heads, so when he’s fishing in depths greater than 15 feet, Grigsby opts for a heavier 1/4-ounce head. This allows him to work an area faster than a light head would allow so he’s able to find productive water quickly. Fall bass tend to scatter and move by the hour, making efficiency an important factor.

Instead of using a finesse worm like many anglers select for their shaky head applications, Grigsby prefers a larger and more aggressive soft plastic. Although fall bass may be tough to catch at times, it’s important to remember— they’re very much in a “reaction” mindset this time of year.

“I’ve been using the Strike King Cut R Worm on my shaky heads with awesome results,” Grigsby said. “As it falls, the tail paddes the entire way down and once it reaches the bottom, it acts just like a straight tail worm with tons of action. When the fish are really aggressive, I’ll actually swim it along the bottom as I’m trolling between docks.”

Keep your retrieve simple— Grigsby’s shaky head retrieve is fairly straight-forward. He’ll drag it along the bottom until he hits a piece of cover and shake it in-place in hopes of enticing a bite. When he’s reeling it in to make another cast, however, he’ll stop it for about one second halfway to the boat to take advantage of any “followers”. Sometimes this quick pause will cause lethargic bass to react and absolutely crush the bait. 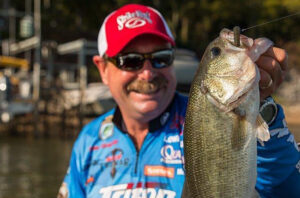 Although it’s tempting to imagine thousands of roaming bass directly underneath big schools of shad, it’s not always the case throughout the fall. Bass often use shallow cover as ambush points, or hideouts, in other words. They’ll position closely to docks, stumps and grass lines and when a few unlucky shad pass by, they pounce on the opportunity for an easy meal.

To target these cover-oriented bass, Grigsby turns to a wacky rigged stick worm, such as the Strike King KVD Perfect Plastic Ocho, with incredible success.

“Wacky rigs are incredibly tough to beat this time of year,” Grigsby said. “They skip across the water so well that you can put ‘em anywhere you can imagine with almost zero water disturbance. This setup also gives you a very vertical presentation that allows you to thoroughly dissect specific pieces of cover, which can be hugely important when you’re dealing with finicky bass.”

Wooden docks— Much like his shaky head strategy, Grigsby fishes a lot of wooden docks with wacky rigs. As the bass follow the shad during their shallow water migration, they’ll often use docks just like we’d use a highway rest stop— they’ll pull out of the channel, recover a little bit and grab a quick bite to eat before getting back on the road. He’ll target both walkways and the darkest areas he can find underneath the docks.

Foam docks— Fall drawdowns can leave many anglers frustrated due to the lack of available cover in the water, but foam docks offer a unique option. These docks are designed to float regardless of the water levels and they act as major concentration points for bass. Even if they’re right on the bank, Grigsby spends a lot of time skipping wacky rigs underneath them. Don’t assume there’s just one fish on them either— it’s not uncommon to catch several bass from a single piece of foam.

While many of us consider a wacky rig a simple work hook stuck through the middle of a stick worm, Grigsby has a more specific way of rigging it and to no surprise, his reasoning revolves around efficiency.

“I actually weight my wacky rig most of the time,” Grigsby said. “I put a 1/16-ounce Eagle Claw nail weight in the middle of the worm before rigging it on a Lazer Trokar TK 97 hook. This allows me to do three very important things— I can fish faster because it has a great fall rate, I can make longer casts in clear water because it’s heavier and I can also make ridiculously accurate skip casts into some really gnarly areas.”

Lift softly and slowly— Try not to rush things when wacky rigging shallow cover. The beauty of this rig lies in its natural, non-threatening presentation so patience is essential. Grigsby lets it sink to the bottom on slack line before he softly lifts his rod tip a few inches. Before letting it fall back to the bottom, he’ll pop the slack in his rod tip to make the stick worm undulate. Because big fall bass can often bite very lightly, he believes that an overly aggressive retrieve will cause you to unknowingly rip the bait from the bass’ mouth.

Learn what if feels like— “The most important thing is to learn and memorize what your wacky rig feels like without a fish on it,” Grigsby said. “They eat it on the fall most of the time, so your line will just barely feel heavy when you get that bite. It’s also important to become a line watcher with this technique. You’ll get a lot of bites where your line will slightly move to the side—sometimes just an inch or two—so slowing yourself down and paying close attention to the subtleties will make a tremendous difference in your hookup ratio.”

There’s no doubt that fall fishing can be frustrating at times. With an endless sea of bait and lots of nearby bass activity, the lack of bites can be enough to drive an angler crazy. But the next time you find yourself struggling for bites this fall, break out Grigsby’s one-two punch. Sure, it may be considered “finesse”, but the action can be anything but.