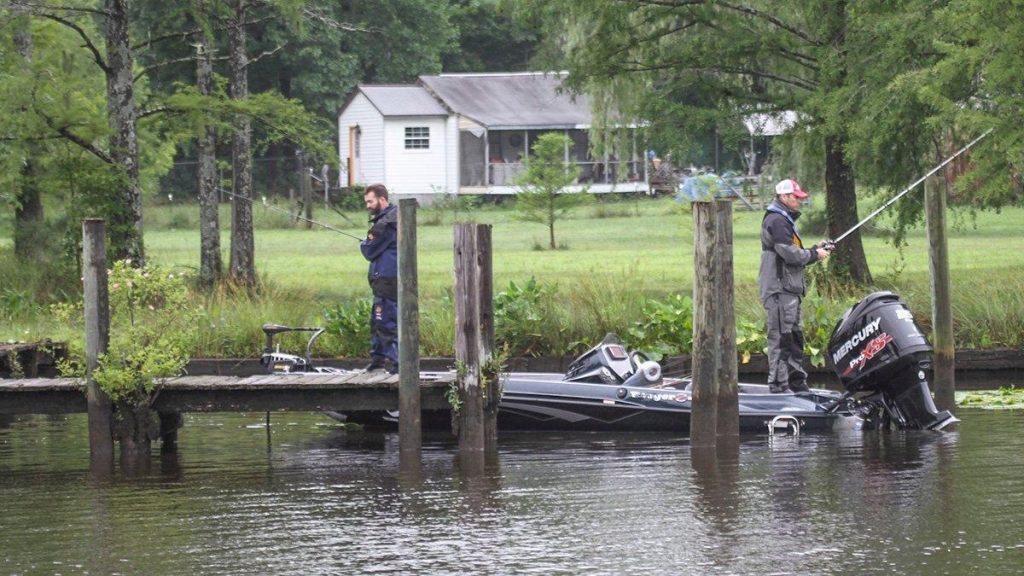 Long, short, simple or complex – docks may be intended to provide waterfront access to boats, PWC’s and pretty sunset seating, but to a bass fisherman, it offers an emergent reef system with a bounty of opportunity for bass fishing.

Suffice it to say, simply hopping from one dock face to the next cuts the potential to a fraction. Plenty of fish get their egos dented on the front side, no doubt; but a comprehensive strategy yields greater productivity. 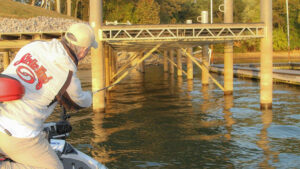 For starters, consider a critical point from Bassmaster Elite Series pro Mark Menendez. Seeking to maximize each dock’s potential, Menendez’s success hinges not only on presentation accuracy, but also on presentation order. In short, you don’t want to spook fish trying to reach other fish.

“I look for the key element, whether that is an oversized pillar or a pocket of dark shade and determining how easy it is to penetrate that spot. If that is a difficult cast to make, it will not be my first cast. I will proliferate the edges, make several pitches around the area and try to entice additional fish that might be around the dock before I go to the heart of the matter.

“If it’s an easy shot and a clean shot, then I will go to the heart of the matter and get there the quickest.”

When those sweet spots sit beyond your reach, a little creative initiative goes a long way. Case in point: En route to winning the TBF National Championship on Grand Lake in April, Shawn Gordon nosed his boat up to a floating dock’s walkway, put one foot on the ramp and reached his casts into the otherwise inaccessible waters behind the shading structure. 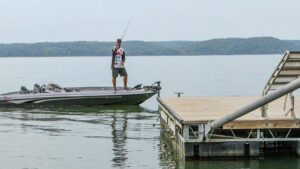 FLW Tour pro Terry Bolton agrees with the calculated approach plan. He describes a general strategy based on what each dock offers. Whenever possible, he tries to come at a dock from the side or the front, depending on the type of dock – floating or stationary.

“When I pull up on a floating dock, if I approach from the side, I look for two things: the darkest points, which are usually where the walkway meets the dock and the mud poles, which anchor floating docks, and the walkway posts.

“If it’s a long walkway, I might start on the bank and work my way out. If I come at it from the front side, I might make a long cast down the side of the dock, so if there are two mud poles, I cover both of them.”

With a stationary docks, Bolton makes a case-by-case assessment of what looks promising, based on depth, bottom makeup and any additional structure, such as brush, laydowns and stake beds beyond the dock supports.

In either scenario, Bolton puts a lot of faith in his flipping jig and bladed swim jig – a dynamic duo that handily covers bass behavior on docks.

“I like these two baits because they’re versatile lures; you can skip them and fish them in several different presentations,” Bolton said. “You can swim a jig underneath the dock’s floats, you can allow it to go to the bottom beside the supports. 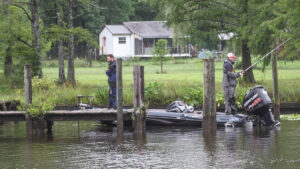 From a frontal approach, Bolton chooses a spinnerbait or a bladed swim jig – something that will trace the dock’s perimeter and work underneath the floats. Bites could come anywhere along those long lateral casts, the real value comes from identifying the gems.

“Sometimes you can actually pattern them to be on the back corners or the front corners of the docks,” Bolton said. “You make your cast all the way to the end and if you get bit right when you pass that back corner, you can develop a pattern that allows you to fish fast. Then, you can come in from the side and fish the active corner on every dock. 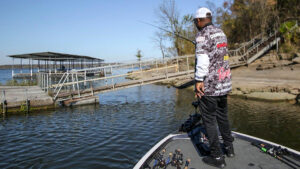 Tour pro Mark Daniels looks at docks with enclosed boat sheds as the classic good news/bad news deal. On one hand, more structure means more shade. However, angling access can be largely limited to the edges.

“Boat sheds that are completely enclosed don’t have much access to the water below – it’s like the owners don’t want you to reach the fish,” Daniels joked. “But sometimes, they leave the (roll down) doors open and you can reach back in there.”

Such opportunities welcome a variety of presentations from skipping a jig way back into the shadows, to teasing bass therein with active presentations like spinnerbaits, swim jigs or chatterbaits. Generally, you’ll have better luck talking boat shed fish into dashing out for a reaction bite during low light conditions, but sometimes, just getting a bass to reveal its location with a boil or a flash will paint a red X on that area of the dock. Flip it up and you’ll likely stick the one that was feisty enough to make an appearance.

Aggressive types won’t hesitate to get all up in a dock’s structure and flip/pitch baits over boat lifts, across dock cables and into any likely fish sanctuary. Armed with stout rods and braided line, the attitude is: “Hook ‘em first, worry about getting ‘em out later.” 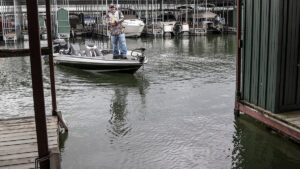 Bolton likes docks with boats present – particularly the shady, heat-holding pontoon boats. Sneaking a spinnerbait or a jig into gaps between docks and hulls can yield bone-jarring strikes.

Empty boat slips don’t bother Elite pro John Murray. He’ll fire a Neko-rigged Gene Larew Tattle Tail Worm into the far corners and work it back out on a semi-slack line. (Because he’s fishing spinning gear, Murray maintains a quick-access angle, as he generally has to slide into the slip to quickly boat his fish before it tangles somewhere.

“I really like a swim jig or swimbait because those fish are around something horizontal in the water and I can pause those baits, keep my rod tip up and keep them in the strike zone for a longer period of time,” Menendez said. “If it’s postspawn, I’ll go with the swim jig because the fish will most likely be guarding against bluegill eating their fry.

“If it’s a summer or fall deal, I’ll go with the swimbait because it will be more of a shad bite.”

For mud poles, or tall support legs, Menendez likes a vertical presentation that probes the structure all the way to the bottom. A KVD Finesse Worm on a light Texas rig fits well here. 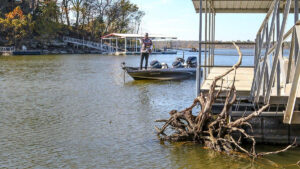 Low sun angles of morning and late afternoon cast long shadows – particularly with taller boat houses. Bolton said this plays more on clear water lakes like Table Rock or Hartwell, where bass will actually utilize the darker water, as they would hard structure, for ambush feeding and shelter.

“I’ve seen it where you can throw your jig right out in the shade and get bit,” Bolton said. “I’ve done better with jigs because those fish tend to be down deeper in the cleaner water. A shaky head and a wacky worm are also good options.

“I’ll always start out with the bigger baits and if I don’t draw a strike, I’ll go down to the shaky head or the wacky worm.” 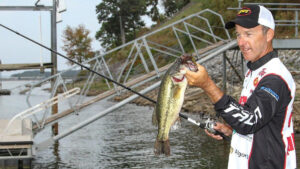