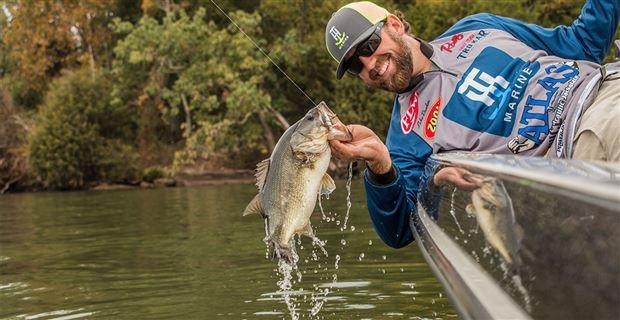 Fall bass fishing can be a fickle, demoralizing beast at times. As the water temperatures cool and the shad move towards the shallows, anglers can enjoy some of the most exciting fishing of the entire year. The bait is popping on the surface, the bass are gorging themselves and you can cast almost anything in your tackle box into the activity and expect a quick bite.

As the fishing pressure increases and the bass become educated to our offerings, however, the fishing often takes a quick turn for the worst. Make no mistake about itâ€”the fish are still thereâ€”but bites become few and far between. Welcome to what’s commonly referred to as the “fall funk”.

According to FLW Tour pro Luke Dunkin, downsizing your lures and adopting a finesse power-fishing approach is an excellent remedy to this age-old conundrum. When the bite gets tough, he relies heavily on three primary options.

We’ve all had it pounded into our heads for years: Cloudy, windy days are ideal for great fall fishing. The bass aren’t holding tightly to cover and they’re more apt to roam and actively chase down big schools of bait, right?

“The standard fisherman’s theory is that bass will smoke reaction lures on overcast fall days,” Dunkin said. “This may be true for some anglers, but I don’t entirely buy into it when I’m utilizing smaller profilesâ€”I want it to be slick, calm and sunny. Bass can’t see very well in cloudy conditions, so they have a tough time tracking down smaller lures due to the lack of water displacement and vibration.”

It’s also important to consider the nomadic behavior of shad. On especially cloudy days, schools of bait often suspend in the middle of water column and of course, the bass follow suit. This can make for a difficult situation.

“Suspended bass are notoriously difficult to catch,” Dunkin said. “I’m strictly looking for high-percentage opportunities. When the sun is out, those big balls of shad spend the majority of their time near or on the surface, giving anglers two primary advantagesâ€”you can quickly identify productive water and the nearby bass are much easier to fool.”

Topwater lures seem to be tailor-made for fall bass fishing. If you’re having problems getting bites on the larger, more traditional topwaters, however, don’t throw your entire game plan out the window. Instead, employ a more diminutive approach.

“More times than not, I’ll start my dissection with small topwaters such as a Lucky Craft Gunfish 95 or Rapala Skitter Prop,” Dunkin said. “I’ll look for any flats in the backs of small creeks and bays and try to locate some sort of small, one to two-foot ditch running through them. I’ll initially fan cast these lures around the entire area and as I locate small pieces of isolated cover such as stumps or laydowns, I’ll make several pinpoint casts to these high-percentage targets.”

If an area lacks good-looking cover, don’t be discouraged. Barren flats can hold large numbers of quality bass as long as bait is in the area. When Dunkin notices small shad popping on the water’s surface, he opts for a prop-style topwater lure to stir things up and “fire” a school.

“Small prop baits can be incredibly effective in this situation,” Dunkin said. “I’ll cast them past the balls of shad and work them right through the middle. Essentially, the commotion of those prop blades causes the bait to scatter which acts as a dinner bell to nearby bass. It can turn a pretty dull-looking area into an all-out feeding frenzy in a matter of seconds.”

Soft jerkbaits are certainly no big secret throughout the fall months; they’re a near-perfect representation of shad and you can cast them a mile to cover water efficiently. Their effectiveness makes them a popular choice for savvy anglers, but this also means the bass get become pretty wary of them as the fall season progresses.

Dunkin takes full advantage of this familiarity by showing the bass a much smaller profile.

“It’s difficult to beat a 4-inch Zoom Super Fluke Jr. in Pearl White or Arkansas Shiner,” Dunkin said. “If the bass won’t commit to my smaller topwater lures, I’ll rig one of these colors on a 2/0 Lazer Trokar EWG hook and use it as a follow-up presentation when I know bass are in the area. As it gets later in the season, I’ll also use the Super Fluke Jr. on transition banks leading to the back flats and simply blind cast it as I work down the bank. I’m primarily targeting bluff banks, rock banks and any grave-to-chunk rock transitions.”

While he does fish these small soft jerkbaits with the standard “jerk, jerk, pause” cadence, Dunkin fishes it much more aggressively than many anglersâ€”especially in clear water.

“If you have more than a couple feet of visibility, it’s all about the speed,” Dunkin said. “You don’t want those bass to get a good look at the bait, so it’s important to keep it moving quickly in order to make them bite out of reaction. As long as you’re keeping the bait within a foot of the surface and keep your pauses short, you can expect a lot of bites.”

When all else fails and the two aforementioned techniques fail to produce consistent bites, Dunkin falls back on one of the more overlooked lure categories in bass fishingâ€”small hard swimbaits.

“I’ve caught countless fall bass on the SPRO BBZ-1 Baby Shad when the fishing is super tough,” Dunkin said. “If I’ve made a few passes through an area with nothing but a few slaps or short strikes, I’ll come back through and really buckle down with this lure. I most often fish it in less than 5 feet of water and target isolated wood cover on or nearby gravel flats in the backs of creeks. I don’t fish it slow, either. I hold my rod tip high and burn it through the top of the water column so it wakes and creates a nice bulge at the surface. If you can’t see it, you’re probably fishing it too slow.” 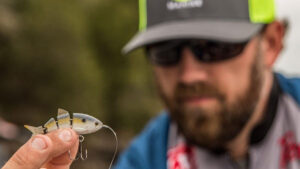 “This is a really light bait, so it’s hugely important to use lighter line to facilitate longer casts,” Dunkin said. “Efficiency is a big factor anytime you’re fishing in the fall, so don’t underestimate the power of a long cast. Not only will this setup allow you to cover more water, but you’ll also be able to catch more of those spooky, clearwater bass.”

When the bass turn sour towards more traditional lure profiles this fallâ€”and it will happen at some pointâ€”make an effort to think outside of the proverbial box and show them something different. Just a small change in size is often the difference between a goose egg and a day to remember.