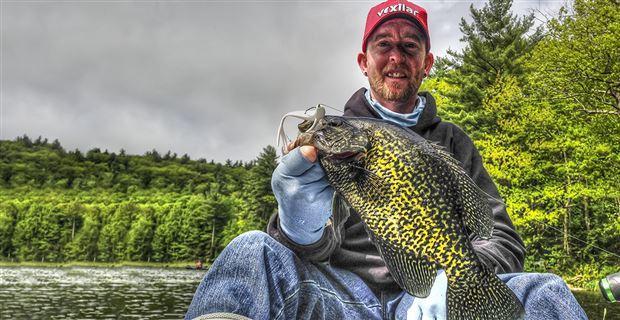 If you want the low down on crappie fishing from a kayak, just ask Capt. Tim Moore. And if you’ll pardon the double entendre, we can proceed with an explanation of the New Hampshire guide’s acumen at both the proximity to and the capture of these popular panfish.

Targeting a seasonal range of depths and cover in crappie factories like New Hampshire’s Lake Winnipesaukee, Turkey Pond, the Bellamy Reservoir, along with Maine’s Sebago Lake; Moore has perfected a game that crappie anglers can employ throughout much of the species’ range. 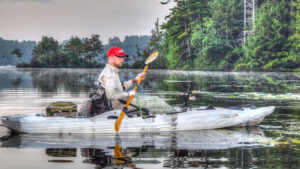 Tight quarters stress him not. Yaks easily slip in and out of areas too tight for motorboat traffic.

No ramp? No problem. If you can reach the water, you can launch a kayak.

“Most of the waters in New Hampshire have crappie, but not all of the waters in the state have a boat launch,” Moore explained. “With today’s angling kayaks there are fewer limitations than ever before. What kayak anglers lose by not having a motor, they make up for in their ability to launch almost anywhere.” 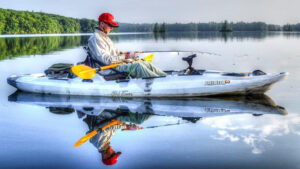 Moore stalks his quarry in one of two Old Town kayaks, depending on the day’s plan. He spends most of his time in a Predator XL Minn Kota, a 13-foot model with a 36-inch beam and a 45-pound thrust Minn Kota trolling motor. When he feels like paddling, Moore hops in the Predator 13, which measures 13 feet, 2 inches long and 33 1/2 inches wide.??As for interior layout and accessories, Moore’s big on maximizing fishing time through efficiency. His advice:??”I hate tying on new jigs while I could be fishing, so I bring multiple rods rigged with different lures,” he said. “That being said, I need plenty of rod holders.

“I like the Scotty rocket launcher rod holders for quick access to my rods. I also have a crate with a 3-rod holder mounted to it. I keep plastic tackle storage boxes filled with my favorite lures in the crate.”??For keeping his eyes on the prize, Moore uses a Sonarphone from Vexilar Inc. This full color mobile sonar unit transmits the sonar signal to an ios or android Smartphone or tablet via WiFi. (He uses the Vexilar SP200 T-Box and an iPad.)

“The Sonarphone T-Pod is a kayak angler’s dream fishfinder since there is nothing to mount and it is very affordable,” Moore said. “You simply toss it in the water and let it float on a tether.

“The best part is I can take it with me no matter which kayak I am fishing with, so I only need one. Also, anyone with the app on their smartphone or tablet can view the same information from one T-Pod.”

Necessary tools include pliers, camera, measuring tape, and a stringer or cooler if you’re fishing for dinner. 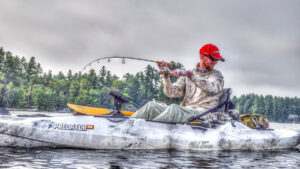 “During and just after the spring spawn, crappie will be in shallow and they will relate to structure such as pond lilies and dead wood,” he said.

“When the lakes turn over in the fall, crappie will form large schools and suspend over basins. They will feed aggressively and for the most part, all day long.”

Moore’s top fall bait is the Live Baby Shad from Lake Fork Trophy Lures. Naming electric chicken his top color, he’ll rig the bait on a 1/8-ounce round jighead, and fish it on the drift.

“The crappie can’t resist it,” he said of this simple, yet effective rig. “I drift over basins until I locate a school of fish with my electronics. Then I repeat that drift, often until I get tired of catching crappie.

“The fishing in the fall is often non-stop.” 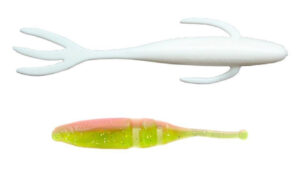 Once spring rolls around, Moore will use a pearl Daddy Mac Lures Whisperer rigged on a 3/0 Trokar offset hook. (Essentially, a weightless Texas rig.)

“I cast it into structure and work it with subtle twitches,” he said. “The pause between twitches is when I catch the majority of fish.

“Not all structure will have crappie on it in the spring, so I try to cover as much shoreline as possible until I catch one. Crappie are rarely alone and once I find a fish I concentrate my casts more closely together. This almost always leads me to others in the same area.

“Crappie will usually spawn in the same area every year, so once I find a spot I return there each season.”

Moore chooses to focus his parting advice not on bait rigging, paddling form or even the all-important decisions on lunch items. Rather he keeps it real with this reflection on the reality of fishing remote areas, often well beyond the eyesight of concerned others.

“I’m going to be a bore here and say, be safe,” he said. “Always wear a PFD and always tell someone where you are going to be fishing.”

For more on kayak fishing for crappie, visit TimMooreOutdoors.com.