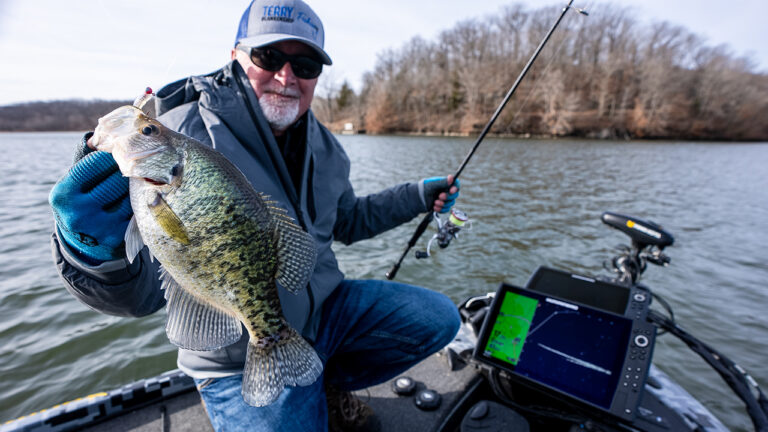 Crappies are usually willing biters, so finding them is the key and most challenging step to success. An Ozarks Missouri native, Terry Blankenship shares his proven system for finding offshore crappies using mapping with several modern sonar technologies. Once found on side-imaging, he instructs how to catch crappies off of brush piles using jigs and plastics in conjunction with forward-facing sonar (Humminbird MEGA Live). *Full tackle and electronics listing at the bottom.

Wintertime crappie fishing can be excellent for those willing to brave the elements. Blankenship starts his search in relatively shallow water, looking for a combination of baitfish, brush piles, and ultimately crappies. After locating a good school, he instructs how to catch ’em from brush piles using a simple jig and plastic combination.

Blankenship uses forward-facing sonar to locate the distance, direction, and depth of the crappies, then puts the jig on their snout. Similar to a video game, he observes how the crappies respond to his lure then makes adjustments to get them to bite.

While there are endless tackle options, Blankenship favors a jig and plastic for immediate depth control and triggering ability. He shares his go-to screw lock jig and plastic, along with an overview of his spinning rod setup. Check out the Wired2fish Crappie Fishing Guide for more in-depth content.