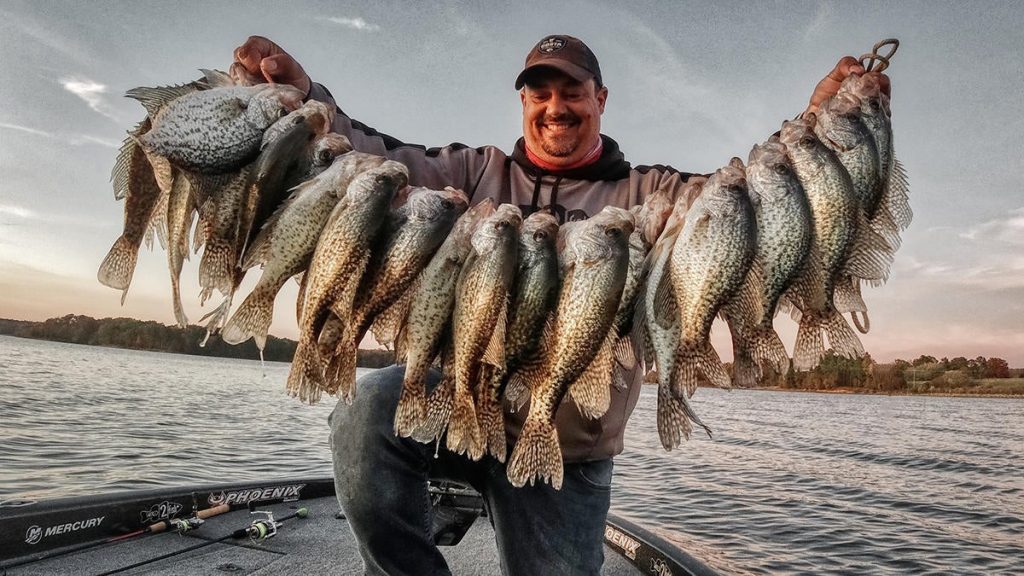 I have found fall and winter to be my favorite time to crappie fish. Granted most will agree that a crappie out of cold water just tastes better, I actually find a lot more enjoyment in finding and catching them this time of year. Where the fish can get real scattered in the spring in summer, they really seem to group up well in the fall and winter. It makes a part-time crappie angler, as I consider myself, feel like a pro at finding and catching them.

Each year I seem to learn a little more about where to look for them and I’ve found a few things that just always seem to be true year after year when the water gets cold. I thought I would run through a few of the things that have helped me find the crappie and then catch them a lot faster and more consistently when I do find them. 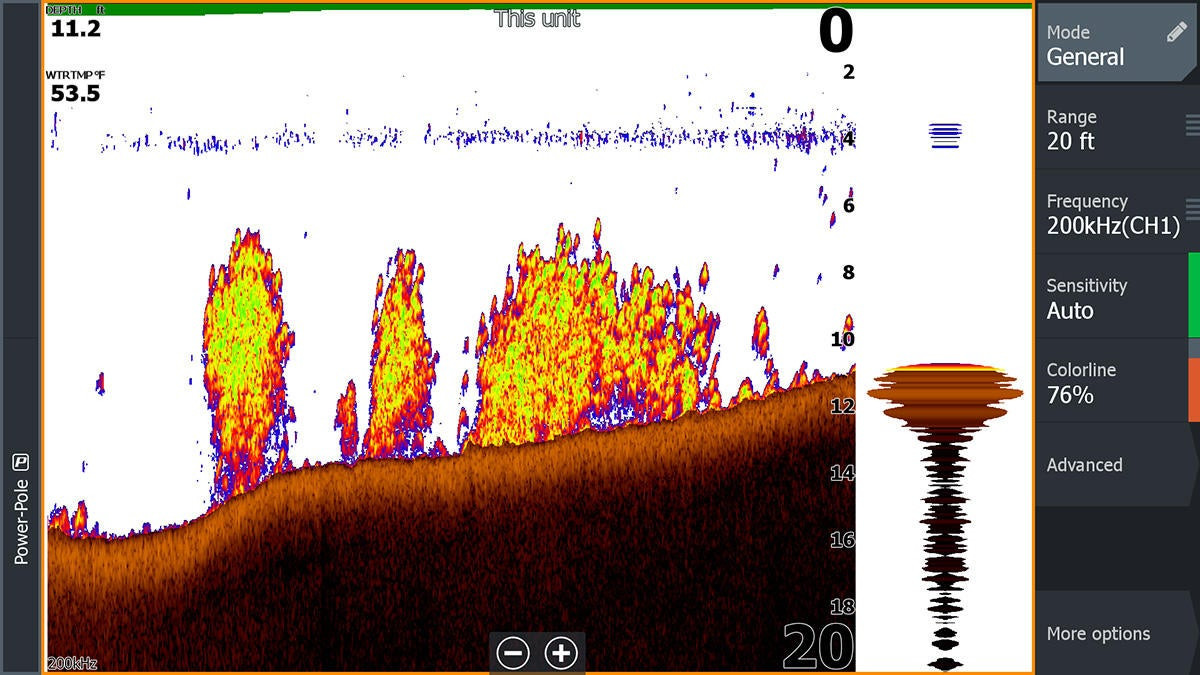 I know as the water gets colder the fish will move shallow for a period and then head out to their deeper winter haunts. So I look for them in some of my regular shallow brushy areas and when I don’t find them there I will start working my way out to where I find them in the winter.

Sounds logical, but I found this year that a massive explosion of bait back into my fishery, Kentucky Lake, has made that movement a little less predictable. Last weekend I got a couple good scrapes with Terry Bolton and we found that the fish actually did the exact opposite thing. We looked for them in the deeper spots after not finding them where they had been earlier in the week. We thought they moved out deeper because it got colder, They actually went to the shallower, colder, dirtier water because that’s where all the bait was.

We moved into one area and were marking bait everywhere and pulled up on the first spot and it was loaded with fish. I scratched my head a bit why they were here and not in their normal spots this time of year. Then I realized there was 10 times the bait in this area as was in the others. Bait usually wins when weighing all the variables.

2. Darkness is your friend 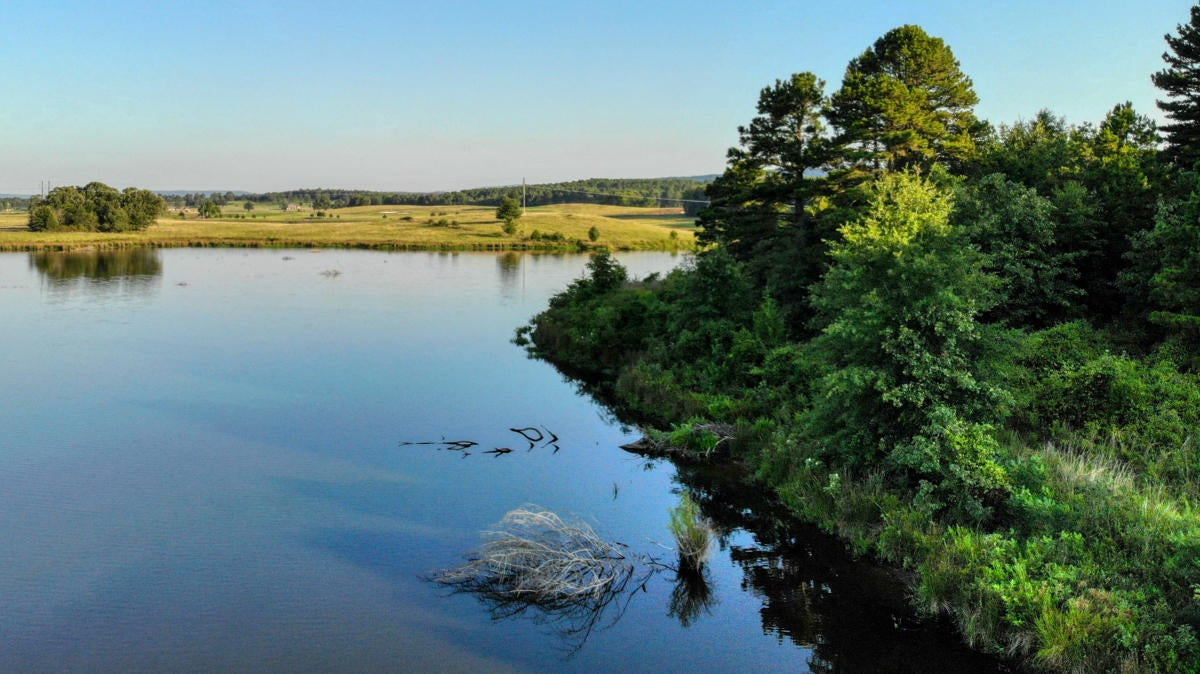 I’ll give you a couple examples here. I catch a lot of crappie out of dark spots in the fall. By that I mean a lot of the brush is on shady banks. Some of it is near boat docks. And sometimes fish are under boat docks. I also saw a lot more activity in recent years late in the afternoons when the sun is on it’s last leg heading down behind the horizon. On Saturday, Bolton and I had 4 crappie in the livewell at 2:30 pm. From 2:30 to 4:30 we boated 25 keeper crappie before putting it on the trailer as the sun was set.

We moved around a bit and found the fish, but I also know they got a lot more active that evening. It’s daylight savings time now and it’s pretty much dark at 5 pm now. But that last hour or so seems to be the magic window in crappie fishing this time of year.

I know several Barkley Lake anglers who wait until the sun is setting to go fish from the bank this time of year, and they will load a 5-gallon bucket in that last hour.

Crappie like lowlight. So anytime you can fish that time or areas that offer lower light, the more your odds improve with crappie fishing.

3. No retrieve is often better than any retrieve 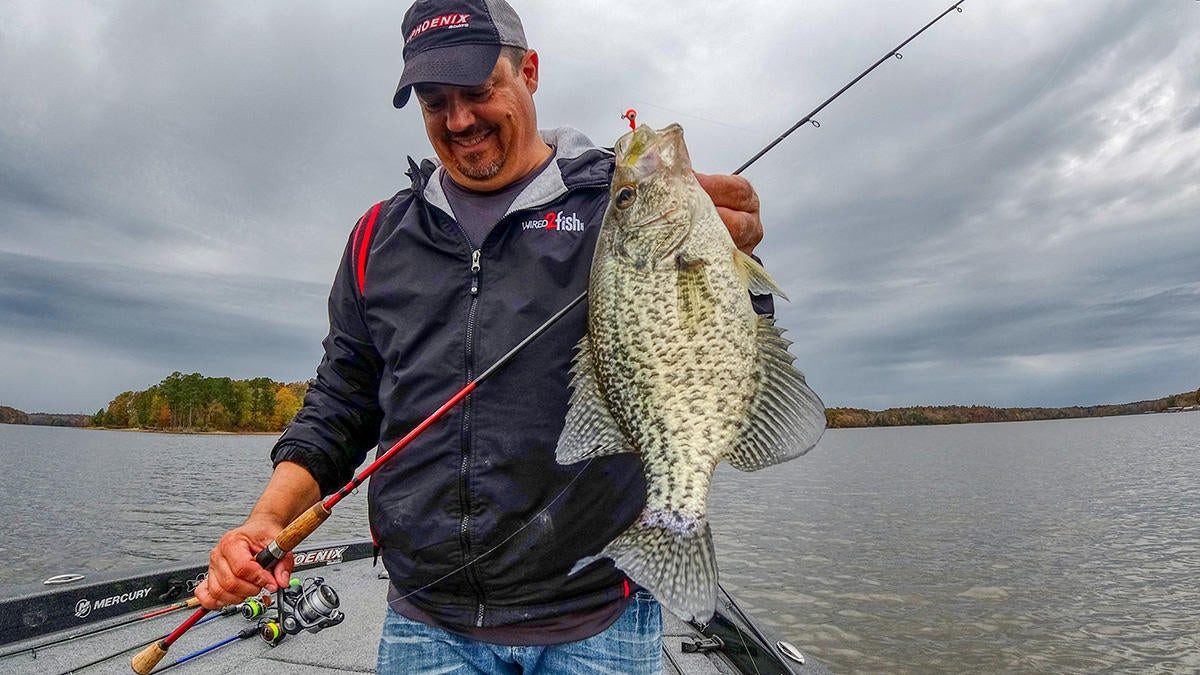 I catch so many crappie in the fall while the bait is just falling to the pile very slowly. I often fish 1/16 ounce heads and find that just letting them fall on semi-tight line catches as many or more than straight reeling does. I also find in the winter, just holding a jig over crappie or over a pile gets more bites than hopping it a lot does.

I might move it just barely every 5-10 seconds so it looks alive. But most of the time, I’m thinking of getting their attention without moving it away from them. I will fish 6-pound test more than 4-pound test too because I think this helps slow the lures down and forces you to fish slower to keep it down. 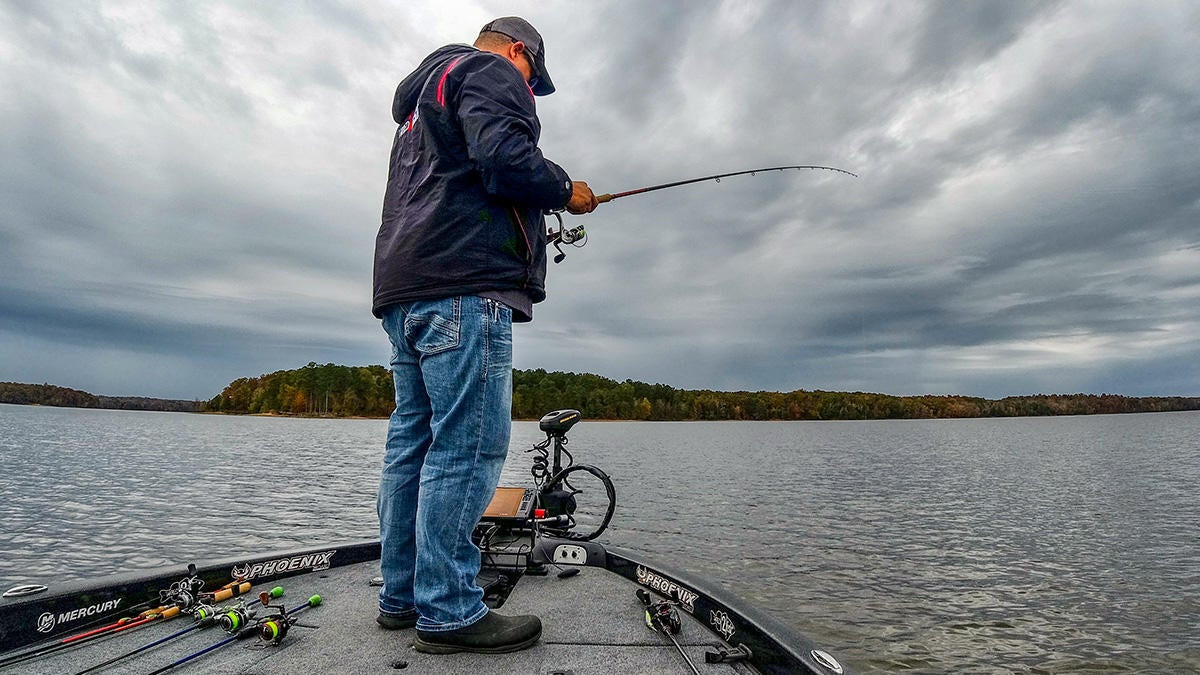 I also hear guys telling me they found a bunch of crappie in a brush pile, got on em and vertical jigged up 3 before they shut off and I had to go to the next pile. I’ve often pulled up to a pile that was loaded and stayed off of it a good ways and pitched jigs and tightlined them through the piles and caught my limit off of one or two spots.

You can get on top of them and catch them if the water is not as clear. But if there is decent clarity it seems like you will catch a couple hot fish right off the bat and then they get a lot harder to catch. Whereas when I stay away from them I can catch a lot more off of one spot.

We’ve also been finding this year with Panoptix that even idling over a spot and seeing a bunch of fish and then turning and trying to catch them is a lot more difficult. Whereas if you will ease up to the pile and use the Panoptix or LiveSight to look for them instead of driving over them and pushing the school around, you stand a lot better chance of working over a school of crappie. 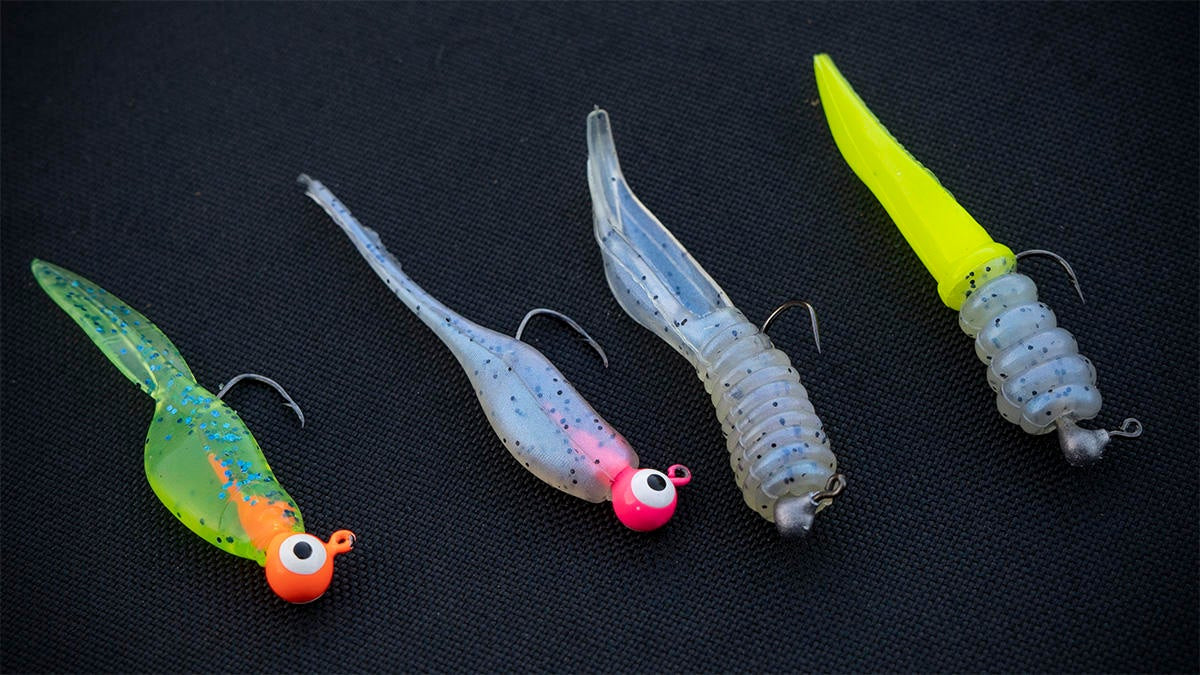 You can use a little fatter bodied bait like a Mr. Crappie Slab Slanger or a Bobby Garland Slab Slay’R on a lighter head to slow your bait down and get a lot more bites. Often the fish will be up high on cover and I want it to stay up in the strike zone longer.

I will usually use a 1/16 ounce Mr. Crappie Jig Head and a Baby Shad. But sometimes I drop down to like a 1/24 Bobby Garland Dockt’R head with that bulkier Slab Slanger and get a lot more bites as the water is cooler with fish up high. Conventional wisdom says use smaller baits when the water gets cold, but a bit bigger bait can limit movement better. 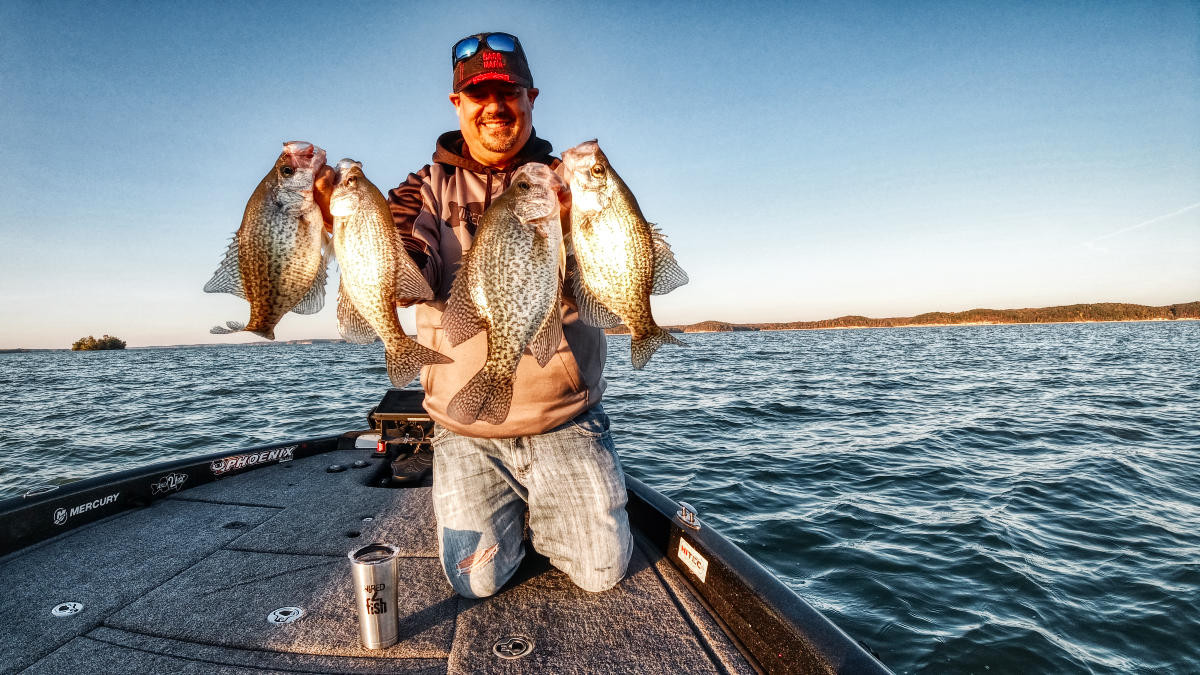 I will add scent this time of year too, especially when I’m trying not to move the bait much but want some added attraction to make them go that last inch and bite. This is typically done by just adding a Berkley Powerbait Crappie Nibble onto the hook. Maybe it helps. Maybe it doesn’t, but I think it does, which usually makes me fish better. 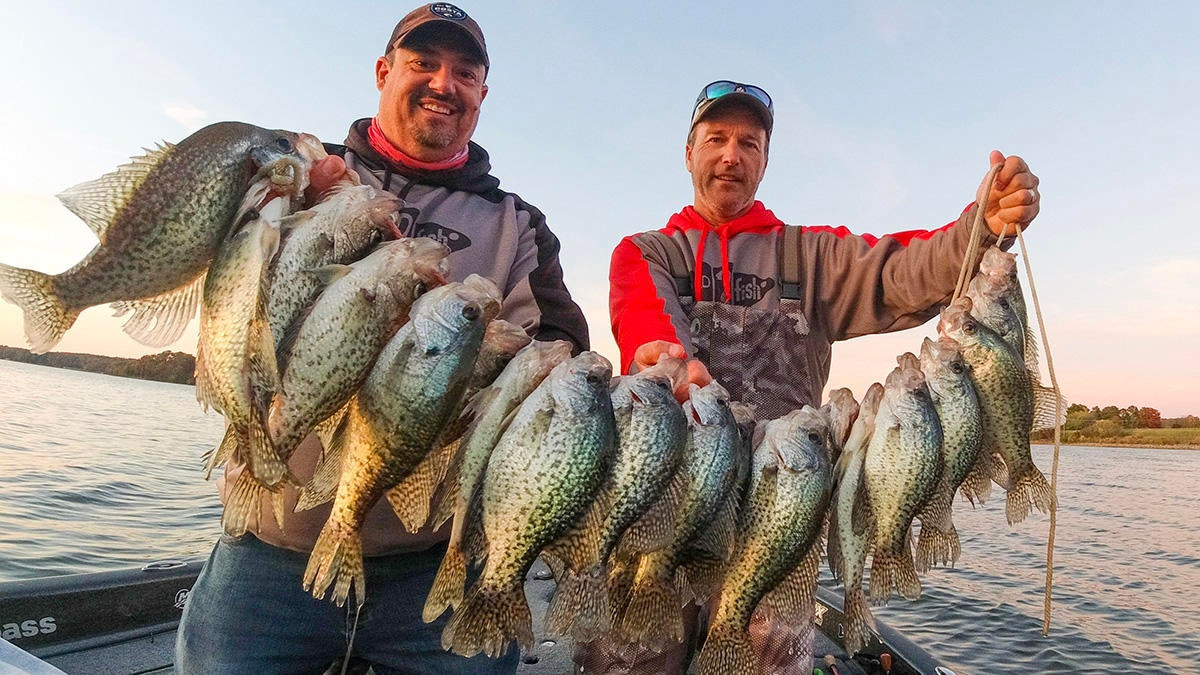 As one added tip, I will definitely say crappie fishing is a lot more enjoyable with company. But beyond that, when you find a good scrape, it’s a lot easier to limit out when you are keeping them going with two baits in the water instead of one.

It also makes experimenting with retrieves, baits, colors, and more a lot quicker and more efficient. Bolton and other friends of mine take a break from bass fishing every fall and winter and go chase crappies with me which is a nice reprieve from a lot more aggressive pursuit of bass, tackle testing and technique honing we do the rest of the year.