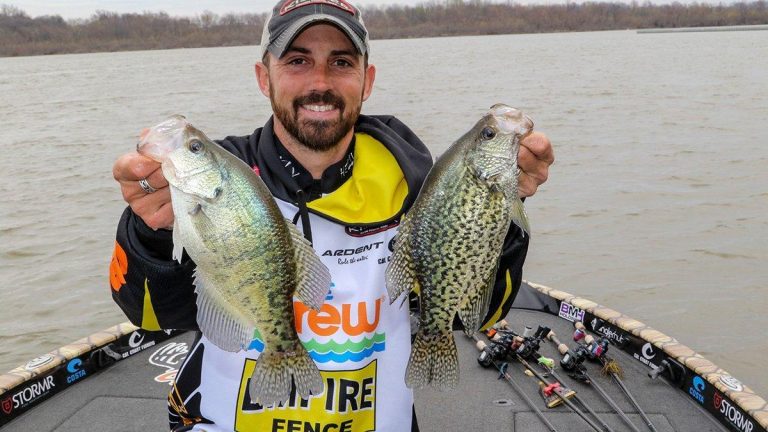 Docks are major fish attractors, and even though FLW Tour pro Kyle Cortiana spends much of his time prospecting them for bass, he’s exploited some good crappie fishing around docks as well. And much like the variety of techniques the Oklahoma angler employs for bass, he’ll also leverage a variety for crappie fishing.

First, the tools of the task. Cortiana fishes dock crappie with a 7-foot medium spinning rod with fluorocarbon line as light as 6-pound (for clear water), but more commonly 10 pound. He likes a 1/16- to 1/8-ounce Bobby Garland Mo Glo jighead in chartreuse or blue fitted with a Bobby Garland Slab Slay’R, Minnow Mind’R or Baby Shad.

“If you want more action, you’d go with the Minnow Minder or the Pile Diver, but if it’s cold and you want to imitate (slow-moving forage), the Slab Slayer will be the one with the least amount of movement,” Cortiana said.

Each dock Cortiana approaches represents a multi-level opportunity. Sometimes, it’s a first-drop kinda deal; but more often, he has to determine how the fish are relating to the structure. Here’s his approach

“The first thing I’m going to do is target the fish suspended immediately under the floats,” Cortiana said. “A lot of people miss this whole deal; but I grew up fishing while standing on the docks, and for the most part, if you have a black crappie fishery, I’ve noticed there’s a larger number that will stay higher in the water column than white crappie. They’re usually really aggressive.”

Comparing the black crappie proximity to the bluegill we often see hugging dock floats, Cortiana’s shore-bound youth typically found him dangling a jig maybe a foot off his rod tip. Today, he adapts his presentation for boat fishing, but still maintains his strike zone focus.

“If I’m pitching to a dock, as soon as my jig hits the water, I’m holding my rod a a 45-degree angle and I’m slowly retrieving that jig to keep it a foot or two under the water and run it right by the float,” he said. “You’ll really get a lot of aggressive black crappie bite your jig that way.”

If this doesn’t do the trick, or if the upper water column bite fizzles, Cortiana shifts presentations.

When he’s trying to dial what depth the crappie are occupying, Cortiana will flip his jig to the back corner of a dock — or a boat stall — shut his bail and let the bait slowly fall back toward him on an angle.

“It starts at zero and falls all the way back to being vertical with the boat,” he said. “You have to determine if there is a depth the crappie prefer. If I’m at a dock that’s 25 feet deep, those fish could be suspended at different depths. This is a good way to get an idea of how deep they are.

If he marks brush under or adjacent to a dock, Cortiana will cast past the cover and slow reel his jig through the strike zone. Using a jig with a weed guard is essential here.

“I’ll fish all three of these techniques at every dock I go to,” Cortiana said. “I’ll flip it shallow and reel it back shallow, then I’ll flip back in that corner to see if any fish are suspended and then my next presentation will be all the way to the back of the dock, open my bail and feed it line until it gets to the bottom.”