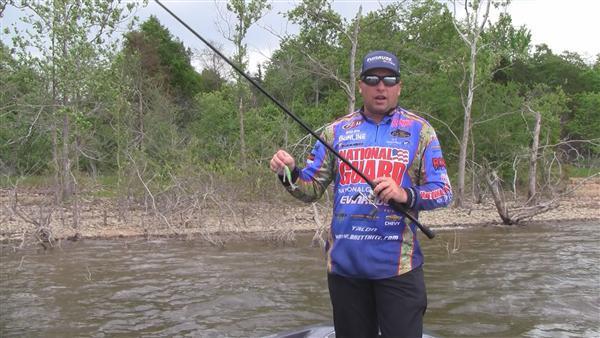 “That’s three in a row, another nice largemouth. They are just choking this thing I mean we got kind of a little front coming in and just having a ball out here,” Hite said.

“Another real key to using either a swimming jig or a Chatterbait style bait is having a nice rod with parabolic action. You know a lot of people they want to think this thing is like a jig but it’s not you’re going to want to throw it on something like your action bait rod, something that has a little give. It’s a big misconception that you lose a lot of fish you these baits. I catch probably 95% of the fish that I hook on this bait and that’s because of this nice parabolic action rod. You want something that you know the first foot or so is real soft but as you get down to this mid-section of this rod it has a lot of beef so that you can get those fish out of the heavy cover.”