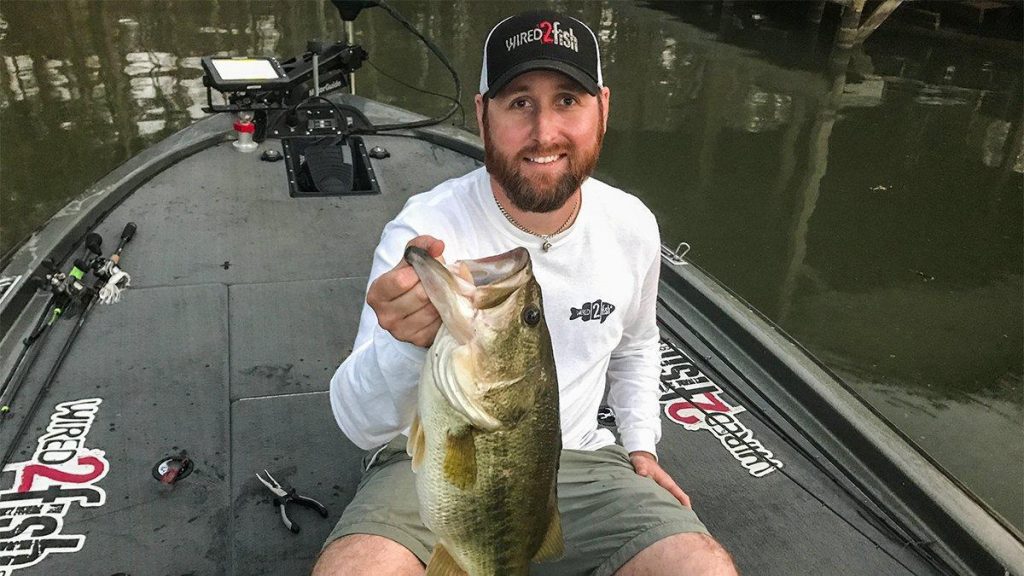 I’ve fished a ChatterBaitâ€”also called a bladed jigâ€”for many years, but I honestly don’t think I understood its full power until the last few months. For whatever reason, the lightbulb has clicked and all of the sudden, I’m realizing a lot of the mistakes I’ve been making for the last several years. It has been one of my biggest fishing epiphanies in the last decade.

I sincerely want to help you avoid the same mistakes I’ve been making. I want you to pick up a bladed jig and enjoy its true potential; because it’s a powerful little dude if you play your cards right.

Mistake No. 1: Running from clear water

Let’s touch on this first because I believe it’s the most common mistake for many shallow-water anglers. I’m going to bold the next two sentences to make a very clear point: If the water is too clear for a crankbait, throw a ChatterBait. You will catch the same fish.

I am a diehard shallow crankbait guy. I’m a much more effective angler when I’m moving quickly and winding my reel handle. Everyone’s different, but I love covering water. There was only one (major) problem: When the water would clear up, they wouldn’t even sniff a crankbait around here. So I’d have a small, prespawn window with dirty water and rising temperatures, I’d crush ’em on a crankbait for a week and then fade back into obscurity. I’d go right back to sucking.

Not anymore, though. The ChatterBait has become my clear-water crankbait and I’ve been able to extend that bite for months. I’ve been able to leave my main areas, let them rest and find similar areas in other parts of the lakeâ€”water color hasn’t really mattered. If it’s dirty, I’ll still throw a crankbait. But if it’s clear, I’m not spun out anymore. I’ll pick up a bladed jig and fish it the same way with outstanding results.

Don’t ever let clear water deter you from winding a fast-moving bait.

Mistake No. 2: Getting twitchy with the hookset

This issue might have taken me the longest to adjust. ChatterBaits are incredible around grass and I’ve been fishing them in the bank grass around my home lakes. But there’s a hidden challenge that you have to learn to work around: That grass sure can feel like a bass bite when you bump into it.

For the longest time, I’d half-jerk on a lot of those “bumps” but I was missing a bunch of fish. I’d bump into a stalk of grass, I’d jerk thinking it was a biteâ€”but as the ChatterBait ripped free of that grass stalkâ€”a fish would actually bite it. The result? My rod tip was way too high and out of position when the bite occurred, which was making me lose leverage and miss fish.

I’ve started employing a technique that has really cut down on those miscues, though. Instead of jerking when I feel a bump, I’ll actually reel very quickly for about five or six turns of the reel handle. If it’s a bass, your rod will load up similar to a swimbait bite and you’ll be able to swing into your hookset much easier.

My particular ChatterBait of choice is the Z-Man/Evergreen ChatterBait Jack Hammer; I choose it because of how well it comes through grass. When you reel quickly through the grass as I just mentioned, the lure pops out of the grass nearly every time without fouling. So this power-reeling method accomplishes one of two things: It either hooks the fish or pops your Chatterbait out of the grass. There’s no need to swing on everything that feels like a fish. 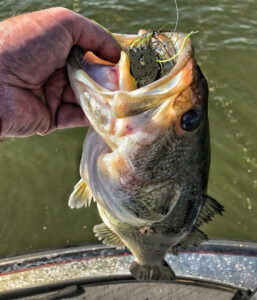 You will catch some bladed jig fish on a standard, chuck-and-wind retrieve. But I guarantee you’ll catch more if you incorporate some action into the retrieve with your rod tip. Old habits die hard, but I suggest doing everything in your power to avoid getting into that robotic mode with your retrieve.

Now, this doesn’t mean you have to rip it through grass like a lipless crankbait. But just a simple pause in your cadence or pop of your rod tip can be enough to elicit a reaction strike from an otherwise uninterested bass.

I like to make these small twitches and cadence changes while my ChatterBait is near irregularities. These can be defined as small points in grass, pockets in grass or even ladders coming off of boat docks. If it looks different than the surrounding area, there’s a great chance that a big bass is using that area as an ambush point. You might catch that fish by haphazardly reeling your bladed jig in front of its face, but I prefer to play towards the biological instincts of a bass instead.

These small changes in your cadence cause your ChatterBait to act erratically, which imitates two very important things: Injured forage or fleeing forage. Both of these things are easy pickings for opportunistic bass and they are hard-wired to attack in these situations.

Mistake No. 4: Failing to keep your trailer snug

This is something that, in my opinion, is overlooked entirely too often. Bladed jigs are one of the best skipping options when you’re targeting shallow cover, whether it’s willow trees, boat docks or laydowns. With a little practice and a streamlined trailerâ€”I prefer a RaZor ShadZ because it’s so slenderâ€”you can skip these baits just like a traditional jig.

The biggest thing that will screw up your presentation and efficiency, however, is when your trailer slides down the shank of the hook. Regardless of your preferred soft-plastic trailer, I strongly suggest putting three or four dabs of super glue on the head of your trailer to affix it to the ChatterBait.

This five-second process will open up an entirely new dimension for you. You can skip for hours without constantly messing with your trailer. You also won’t have to worry about those perfect skips that are wasted by your trailer sliding down and screwing up the action of the ChatterBait. I keep my super glue in a small, waterproof boat box to make sure it doesn’t leak on my carpet.

I started doing this last year and as a result, I’ve found myself reaching for a bladed jig much more frequently. 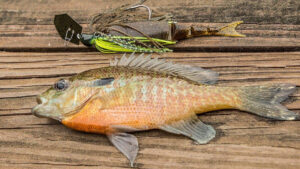 I talk about this with a wide array of techniques and there’s good reason for itâ€”I used to overload my boat with a bunch of similar colors because I always wanted to have the “perfect” color. Truth be told, it spun me out more than anything. I keep it incredibly simple these days and have noticed an increase in both my confidence and success. In my area of the country, I’m only trying to imitate two things with a ChatterBait: A sunfish or a shad. So that leaves two base colors for me to work fromâ€”green pumpkin and white.

I’ve actually noticed something pretty interesting lately. I’ve started throwing the plain green pumpkin color a lot less. Instead, I’ve had a lot more success with the B-Hite Delight color. It’s a green pumpkin base, but it has some bright undertones on the belly. In my opinion, I think this color scheme may stick out a bit more when fishing around the grass. I feel like an all-green pumpkin bladed jig gets lost in its surroundings when you’re reeling it through vegetation. If you can find a color in your preferred bladed jig model that has some chartreuse strands in it as well, I might suggest giving it a shot.

If the bass are feeding heavily on shad, just go with something white. I think most of it is a confidence thing, to be quite honest. Don’t overthink it and try not to spend more time retying different colors than you do fishing. Stick it in your hand and roll with it.

I certainly don’t claim to be a ChatterBait expert, but I really wanted to share some small nuances I’ve learned over the last several years. You might do things a different way than meâ€”which doesn’t make you wrongâ€”but I hope that you can learn from my personal mistakes and shorten your learning curve.