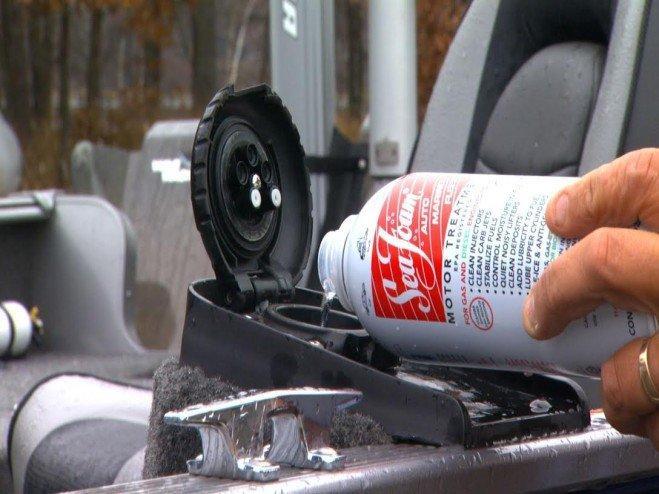 When you live south of the Mason Dixon line the term “winterization” probably isn’t in your vocabulary. Because boat owners do not have prolonged periods of inclement weather with cold, snow and ice and very few months that they cannot use their boat means there is no need to winterize, right? Not necessarily. Time in the tank is relative and environmental conditions can increase the ineffectiveness of fuels too. Cleaning and maintaining your fuel and fuel system can have significant benefits no matter where you live. Making sure your outboard engine always runs at peak performance means your entire fuel system must be cared for on a routine basis.

With today’s fuels being a lower grade mixture, downtime and lack of use means bad things can happen to your engine whether you live in Florida or Minnesota. Protecting your engine starts with protecting your gasoline whether its standard 87 octane gas, ethanol blends or premium. Making sure “fresh” gasoline is in your tank and fuel system prevents problems with oxidation, evaporation, corrosion or contamination from water.

It’s always best to start with fresh gasoline and treating that gas more times than not will keep your engine running at peak performance. Bad gas can cause all kinds of problems including varnish and gum and resulting misfires. Gas left unprotected evaporates quickly and the resulting liquid that is left  doesn’t fire as effectively. Engine failure can result from a gummed up engine that starts with gas being left in the tank untreated too long. You want your engine to always work at peak performance and keeping your gasoline treated for better firing, lubrication and stabilization is the key. Time left in the tank indeed matters.

Below are four concerns with untreated gas and what issues they present.

As time allows for more varnish and gum to form, evaporation gradually removes fuel in order of lightest material first.  For gasoline engines in particular, the most volatile fuel ends (“light ends”) are necessary for vapor formation during ignition.  As light ends evaporate, gasoline’s ability to produce vapors is reduced, especially at colder temperatures. Ignition cannot occur without enough flammable vapors to ignite. Below is a great illustration of what happens to your fuel from evaporation. 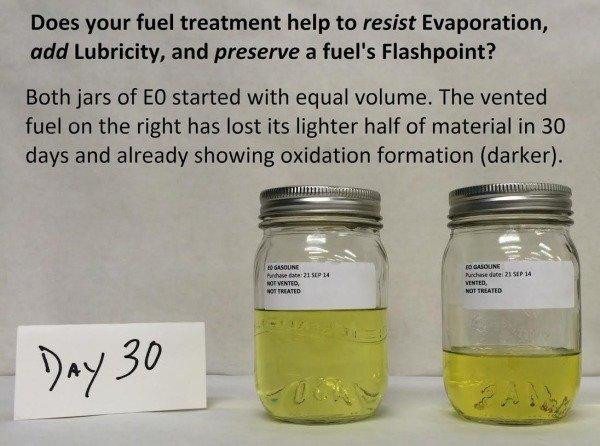 Engine fuel systems are made up of metals, alloys, rubbers, and plastics that are susceptible to various forms of corrosion caused by unprotected fuel, ethanol blends in particular.  When allowed enough time and exposure, corrosion will manifest as rust, salt deposits, acid pitting, dissolved resins, dry-rotted hoses, cracked fuel lines and decayed seal components. Though certain fuel ingredients can be mildly corrosive, some will become increasingly acidic or corrosive when able to react with air, water, climate and other variables.

Corrosion is costly.  Not only will corrosion ruin parts, corrosion particles can pollute the entire fuel system, clogging filters and carburetors, and potentially damaging or ruining the entire engine. 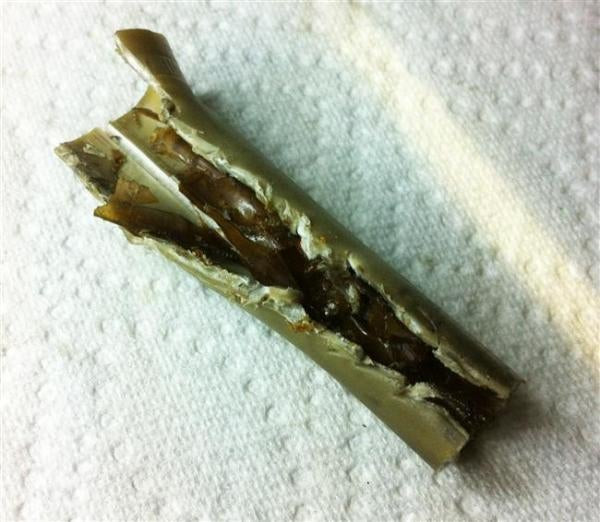 Water can enter fuel by vapor absorption (drawn from air), by condensation (temperature changes), or by direct contamination (liquid water).  Depending on the amount of water and the chemistry of the fuel, water will be present as dissolved water, water suspended in ethanol, or as a separate layer from the petroleum phase.

Overwhelmingly, the most common occurrences of water in fuel enter by vapor absorption or condensation.  Direct water contamination that amounts to fuel phase separation is not common or treatable and requires complete removal from the fuel system.  In any fuel system, water will contribute to corrosion, combustion inefficiencies, line freezing, and microbial growth.

You can eliminate or significantly reduce the effects of water in fuel by treating your fuel a few times per year, particularly when the boat is not in use. Here’s a few tips to ensure your fuel and few system are property maintained.

Small, manageable amounts of water intrusion by vapor absorption and condensation are considerably more common than direct water contamination or events such as water phase separation that require immediate and complete removal from a fuel system. When storing, fill fuel tanks to minimize airspace.  Every day of storage adds more air temperature cycles, causing more vapor pressure exchanges in a fuel system that allow more occasions for moisture and corrosion to develop. Keep tanks filled with fresh fuel, and treat any fuel that may sit in storage. Doing so will minimize or eliminate engine problems caused by degraded or contaminated fuels.