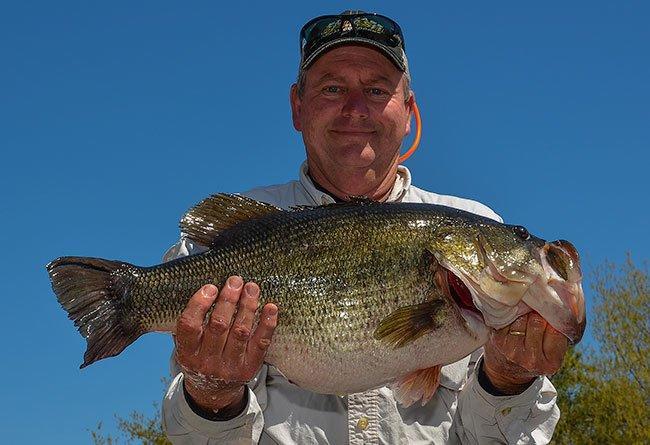 Donald Deville of Ville Platte, Louisiana makes regular visits to Lake Fork with friends and family to fish for big bass, but he had never landed a double-digit fish.

The 14.06-pound largemouth bass he caught mid-morning of the group’s first day on the lake is now Toyota ShareLunker 547. The fish was 25.75 inches long and 22 inches in girth. It was held for pickup at Lake Fork Marina, an official Toyota ShareLunker Weigh and Holding Station.

“It was about my third cast,” Deville said. “I was fishing with one of my sons, and he threw on the left side of the stump, and I threw on the right. And I got the big lunker to bite.”

Deville fought the fish for some time. “She didn’t wrap on anything, but she took a lot of drag,” he said. “Finally we saw her and how big she was, and we got really excited.”

Deville was not familiar with the Toyota ShareLunker program, but some members of his group were and advised him to take the fish to Lake Fork Marina to be weighed. “I’m really excited about the way Lake Fork Marina handled the fish and the care they took of the fish after we got it here,” he said.

Deville said he intends to keep returning to Lake Fork as long as he is able. “Hopefully my grandchildren can enjoy that,” he said.

The fish is the eleventh entry into the Toyota ShareLunker program during the current season. Average weight of the entries this season so far is 13.85 pounds, and the largest entry weighed 16.04. Two 14-pounders and one 15-pounder have also been entered.

Anyone legally catching a 13-pound or bigger largemouth bass from Texas waters, public or private, between October 1 and April 30 may submit the fish to the Toyota ShareLunker program by calling the ShareLunker hotline at (903) 681-0550 or paging (888) 784-0600 and leaving a phone number including area code. Fish will be picked up by TPWD personnel within 12 hours.

ShareLunker entries are used in a selective breeding program at the Texas Freshwater Fisheries Center (TFFC) in Athens. Some of the offspring from these fish are stocked back into the water body from which they were caught. Other ShareLunker offspring are stocked in public waters around the state in an attempt to increase the overall size and growth rate of largemouth bass in Texas.

Anglers entering fish into the Toyota ShareLunker program receive a free replica of their fish, a certificate and ShareLunker clothing and are recognized at a banquet at the Texas Freshwater Fisheries Center in Athens.

For complete information and rules of the ShareLunker program, tips on caring for big bass, a list of official Toyota ShareLunker weigh and holding stations and a recap of last year’s season, see www.tpwd.state.tx.us/sharelunker. The site also includes a searchable database of all fish entered into the program along with pictures where available.