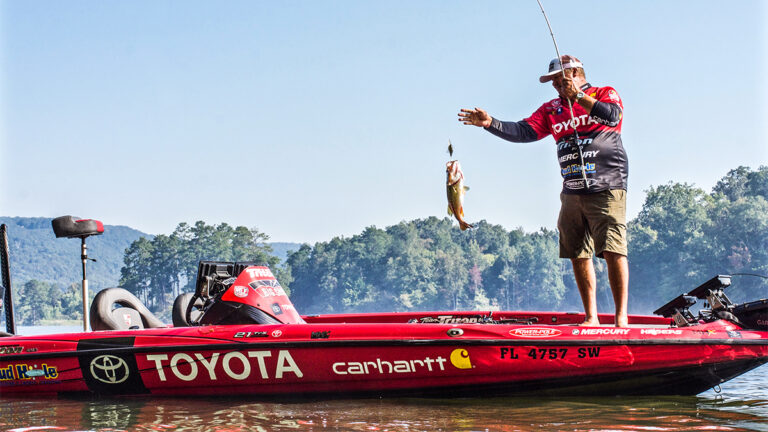 The only thing worse than not catching fish… is hooking and losing fish. There are few lows that compare to watching a nice bass break the surface of the water and seeing your lure fly out of their mouth while they swim out of your life. While this can happen with any type of lure, it is notorious with treble-hooked lures like crankbaits, lipless crankbaits, topwaters and spoons.

Terry “Big Show” Scroggins has spent the better part of twenty years as a professional bass angler and knows this pain all too well. Scroggins is renowned for his prowess in modifying or tinkering with tackle and equipment during his down time. The Team Toyota pro offered one such modification he has come up with to help remedy the issue of lost fish with treble hooks, replacing the split ring on a lure with braided line. 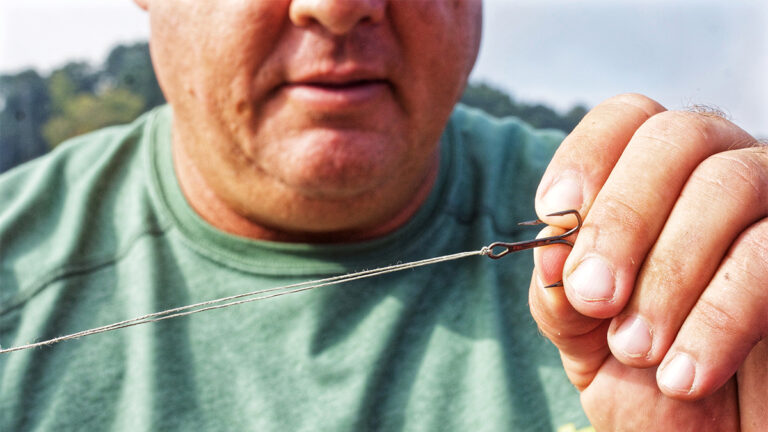 To perform this modification, Scroggins simply removes the back treble hook and split ring on a crankbait, topwater or spoon with a pair of pliers. He then cuts a 10- to 15-inch piece of 40- or 50-pound braided line that he’ll tie the treble hook to. 90 percent of the time, he uses a simple Palomar knot to attach the hook to the braid, but Big Show says any knot you have confidence in will work. 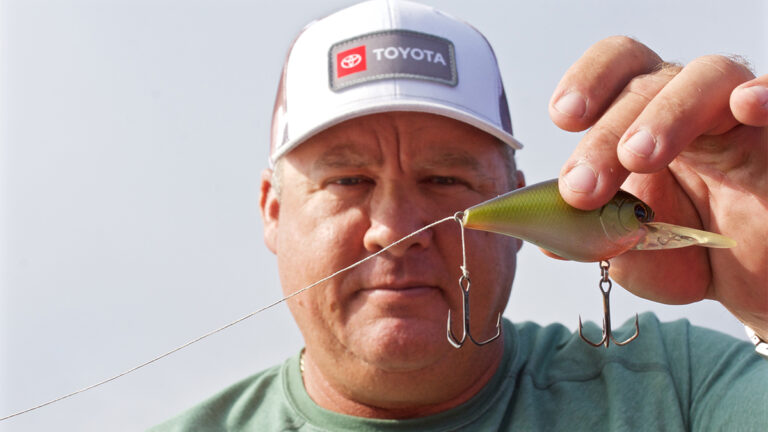 Using the tag end of his braided line, Scroggins loops a simple half hitch knot around his three stands of braid connecting the hook to the lure and cinches it down tight to the hook hanger. He then repeats this process with a second half hitch. 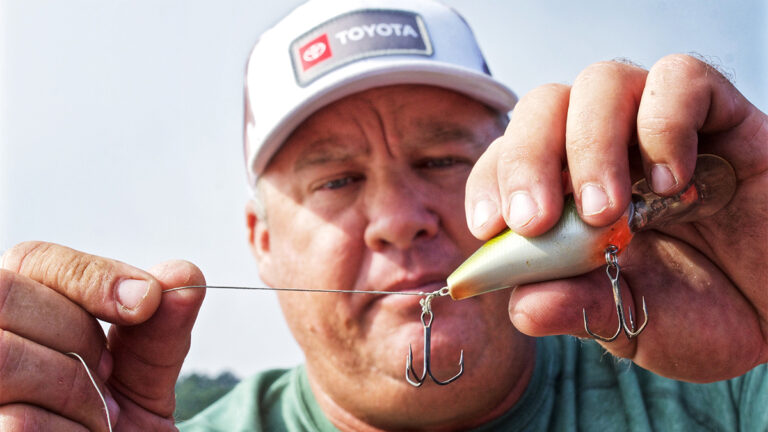 Lastly, Scroggins ties an overhand knot on the tag end of the braided line but before tightening it, he puts a toothpick (or spare straight-shank hook) inside the overhand knot and uses it to slide the knot all the way down to the two half hitches. All that’s left to do is cut the extra line off the tag end and you’re ready to start fishing.

“This might sound complicated but it’s all super simple,” Scroggins said. “You’ll have everything you need inside your boat or tacklebox and this literally takes a minute or less. A toothpick is handy to help slide the overhand knot down tight to the half hitches. That overhand knot won’t pull through your two half hitches no matter how hard you pull on it. It all comes together to be just as strong as a split ring with way more motion.” 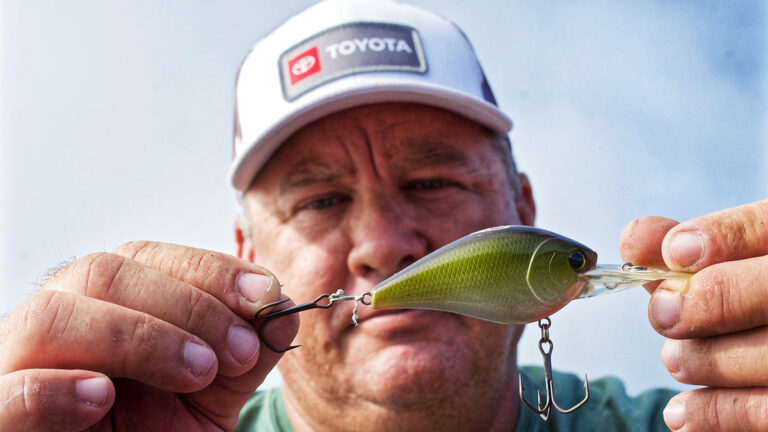 It’s worth noting that Scroggins only ever uses this tackle tweak on the back hook of treble-hooked hard baits. The back hook is where a bass can get the leverage advantage over you as fight them to the boat. If they are getting the bait by the front hook, losing them typically is not as big of a concern. This is a back hook-only modification for Big Show. 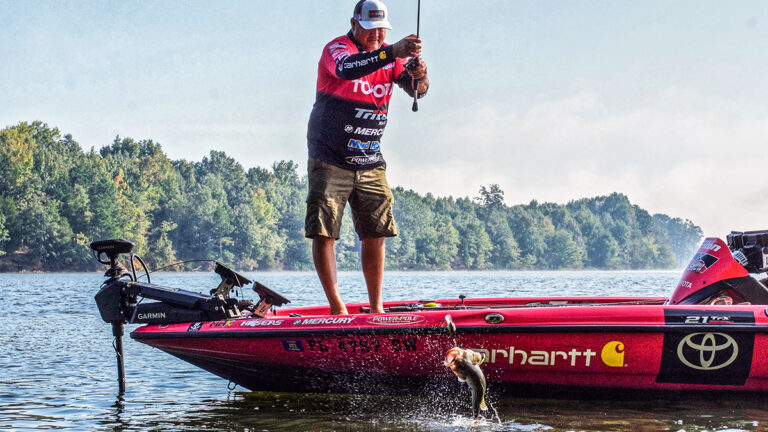 The main benefit is this modification allows the treble hook to rotate freely from the body of the lure. This means a fish will have less leverage as they try their best to shake the hook and leave you shaking your head. A split ring keeping a hook in a relatively fixed position is a good thing most of the time, but in situations where you are fighting a poorly hooked fish to the boat, this becomes an issue.

“I first started toying with this on lipless crankbaits,” Scroggins explained. “I love throwing a lipless and bass love them, too. The only problem is the landing ratio. It doesn’t matter what brand you throw, what kind of hooks you hang off them or what tackle you sling them with… it’s just one of those techniques where you are going to lose some fish. That logic didn’t sit well with me and I spent some time thinking through it.

“I’m no scientist, but in my mind it all came down to leverage and rotation. When a fish has the back hook on a relatively heavy treble-hooked lure like a lipless or a big crankbait, and they get to jumping around and shaking their head that lure is flailing around, too. With the rigidity of a split ring, every time the lure moves or spins it is liable to pull against the treble hook, often causing the hook to pop out. This braided line trick helps to fix that issue.”

Scroggins is quick to admit swapping your split rings for braid doesn’t work 100 percent of the time and he isn’t promising you will never lose another bass if you employ this tackle tweak. This is just one more trick up his sleeve Scroggins uses when the situation calls for it.

Big Show generally relies on a factory split ring just like you and me, but he quickly makes this modification if he is losing a lot of fish on a treble-hooked lure. The only time Scroggins makes this change before getting on the water is with smallmouth bass. Smallmouth are well-known for their acrobatics and are infamous for throwing treble-hooked baits.

“Ask any experienced pro and they’ll tell you smallmouth and treble hooks are a bad combination,” Scroggins said. “Those jokers never give up and will send a crankbait flying back at your boat about as often as you land them. Mark Zona and I got to talking about the braided line split ring trick one time and Z said he swears by this modification for warm-water smallmouth.”

No matter what species you are fishing for, if you are losing a lot of fish on treble-hooked lures it’s worth giving this quick lure alteration a try. It can help you land more fish and learn a new trick in the process. Scroggins has experienced the effectiveness firsthand and says you might be surprised to learn how many bass fishermen are using this tackle tweak at the professional level.