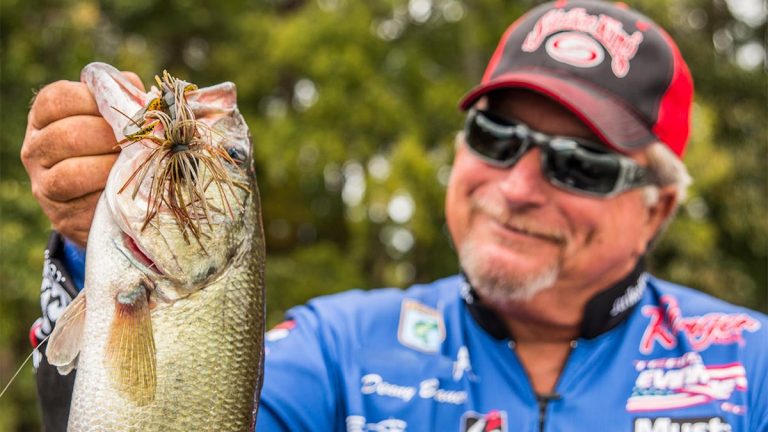 There are numerous must-know bass fishing techniques. And what’s at the top of the list? Flipping, which can put fish in the boat when just about everything else fails.

“Almost every lake has heavy cover, and where do the big bass like to live? They like to live in that heavy cover,” says legendary bass pro Denny Brauer. “Conventional casting techniques often cannot get your bait in there and if you can get your bait in there, your odds of getting the fish out are pretty slim. That’s where flipping comes into play.

“If the water is dirty you can get a lot closer to the fish or if the cover is real uniform and heavy, think of how many more drops you can get into the fish’s home because you’re not spending all that time reeling. You’ve got a piece of line that you’re working with, the reel’s engaged, and you’re fishing close to the fish where you can feel the bites better, you can get a better hookset and have a better chance of landing them. So, flipping can have a real advantage in dirty water and heavy cover.”

There’s a difference between flipping and pitching 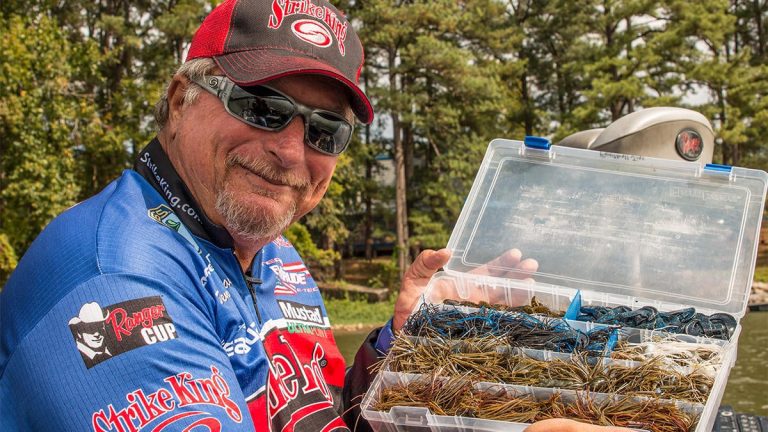 As far as the mechanics of flipping. Brauer explains that the first thing you want is to be working with is the right piece of line. Hold your arm straight out and make sure the bait is even with the reel. That way you’ve got a piece of line-about an arm’s length-that’s very easy to work with. He then recommends that you swing the bait out but when you do, don’t just let go of the line or you’ll splash the bait into the cover, often spooking the fish.

“What you’re trying to do is let the line slide through your hand, bringing your hand back to the reel handle. Now you let your lure fall on just a little bit of slack line, that way the lure will fall straight down into the cover. When it hits bottom shake it a couple of times and now is the time to feel it-if it feels heavy or light you need to set the hook. If not, pull the bait out and flip it into the next good-looking spot and repeat the process. Let it fall straight to the bottom following it with the rod. Give it a couple of shakes, bring it out and flip it into the next spot.”

And that’s all there really is to it-and once you get the hang of it it’ll become second nature, just like making a cast. 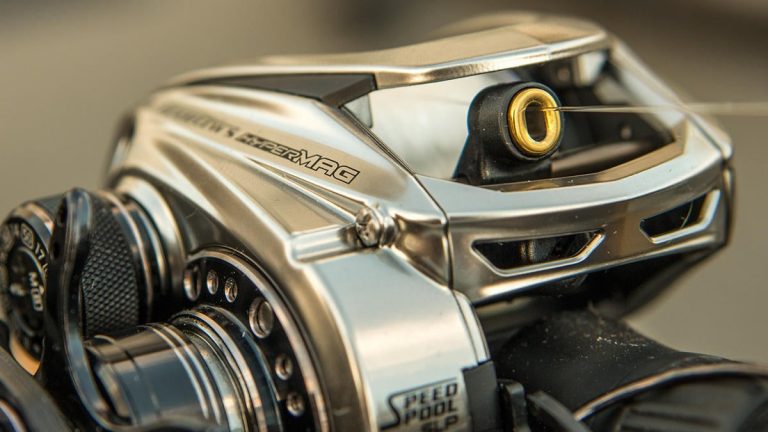 When it comes to flipping and pitching using the right equipment is incredibly important. A good baitcasting reel is crucial. For Brauer, that’s the Lew’s Hyper Mag Speed Spool SLP. Incredibly light and compact, it has a 20-pound drag for really strong hooksets and pulling fish out of cover. It also has a perforated spool so you can tie direct with braid without slippage issues. Along those lines, with many baitcasting reels, Brauer recommends spooling with a few yards of monofilament or fluorocarbon on first, tying directly to that to keep the braid from slipping on the spool.

“No matter what baitcasting reel you’re using, make sure you tighten that drag down as much as you can so you can get the hook set and get those fish out of heavy cover. It’s very important to have a reel that’s heavy duty because you’re going to be using a heavy rod and heavy line along with it and the reel needs to be able to hold up,” says Brauer.

When it comes to rods, Brauer also uses Lew’s sticks.

“The most popular length is a Team Lew’s Speed Stick 7-foot, 6-inch heavy-power flipping rod. Plus, it’s got enough tip in it that it makes a great pitching rod. The bottom line is to find a rod that works for you. If you’re smaller in stature you might want to go with a slightly shorter rod but when you’re flipping and pitching to make sure the rod is at least 7 feet long so you can get the leverage and do the techniques correctly and go with heavy power.”

When it comes to flipping and pitching must-haves, Brauer considers line the most important.

“When it comes to flipping, line choice is where a lot of anglers get confused,” says Brauer. “That’s why I went to work with Seaguar to develop these Flippin’ lines-in both braid and fluorocarbon-so anglers will have the correct line for the technique. Seaguar Flippin’ Braided Line is available in 50- and 65-pound tests. I love to fish the braid in matted grass and heavy vegetation because it’ll cut right through it, you get a great hookset and there’s no stretch to it. So you get a really good hookset and you bury the hook really well.

Now, if the water is a bit more clear or you’re targeting isolated cover and targets I suggest Seaguar Flippin’ Fluorocarbon, which is available in 20-, 25- and 30-pound test. If it’s really clear water with isolated targets, you can get by with 20-pound. If the cover’s pretty dense, move up to 25-pound and if the water’s dirty, move up to 30-pound. You’re never going to have to worry about breaking off a fish. And that’s very, very important because the biggest mistakes that happen with flipping and pitching are involved with your line. You’re either using the wrong line for the situation, using too light of line or not taking the time to re-tie.” 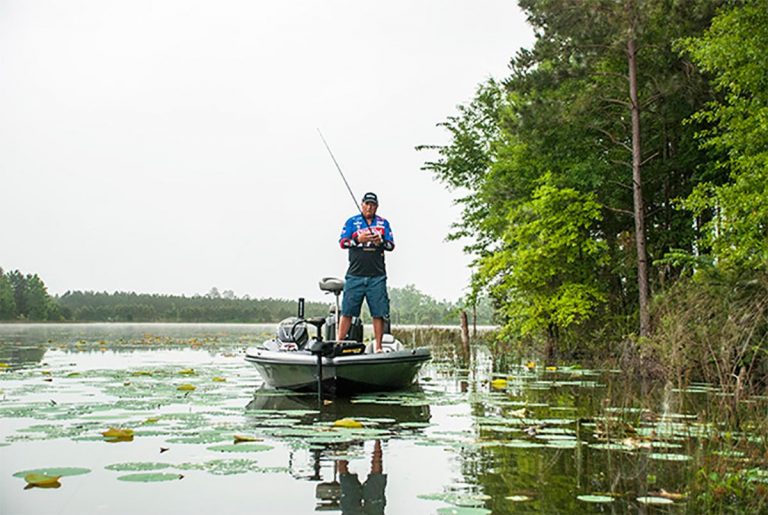 “When it comes to flipping, you’re always hunting for some kind of cover,” says Brauer.

Of course, depending on the waters you fish, that cover can come in a variety of forms. Brauer’s advice is just to get out on the water, target some cover and wait for that first bite, after which you can start getting analytical and working towards discovering what he calls the “pattern within the pattern.”

Often he starts his flipping routine working boat docks, a solid bet for flipping just about everywhere you can find them.

“When it comes to boat docks I’ll fish each post, the walkway and if it’s got anything unusual like a ladder or a rope, a boat lift, etc., I’ll fish it all. But when you get the bite, really pay attention. Where exactly did that bite come from? Don’t be in a hurry to get to the next dock. Sit and analyze the one where you just caught the fish. How deep of water are you sitting in? Is it a gravel bank or a mud bank? Is the dock on a point or back in a pocket? Those fish will tell you a lot if you pay attention. Was it on the shallow side of the dock? The deep corner? Was it on the windy side or the calm side? If you’re fishing a river, was it on the up-current side or the down-current side? The details you can pick up go on. And that’s what I call developing the pattern within the pattern that can be so critical.”

And when he’s flipping bushes, flooded buck brush, willow trees and cypress knees, he’s constantly trying to figure out what side of the target fish are positioning on. Was the fish on the shady side or the sunny side? If he can figure out how they’re positioned he only has to make one flip to the target, a time-saver as a tournament angler, which gives him the opportunity to fish more targets than a competitor who hasn’t figured it out.

“Once I’ve narrowed it down to what side the fish will be on-windy, sunny, shady-I then take it one step further. When you flip it in there and get that bite, ask yourself did the fish hit it on the drop or after it was on the bottom and was I shaking it up and down? Because if a fish hits on the drop the fish is aggressive. Then you know how he’s positioned on the cover and how he’s biting. If he hit it on the drop and your bait hits bottom there’s no need to sit there and jig it up and down. Hit the next piece of cover,” says Brauer.

Conversely, there are times when you may need to flip your bait in and jig it repeatedly up and down, like after cold fronts or on heavily pressured waters. That may also be part of the “pattern within a pattern” that you discover.

“No matter what, spend some time analyzing the cover, use common sense and number one-listen to the fish. When you get that bite, really analyze everything you can about that piece of cover, exactly how the fish hit the lure, and it will make you a more successful flipper,” says Brauer.

While there are several keys to successful flipping, Brauer cites boat control as one that many anglers could improve. First off, it’s important to operate your boat with your bow into the wind or current when flipping, operating your trolling motor to work targets efficiently.

“That way you can be going the speed you want to rather than the conditions pushing you too fast or slow,” says Brauer. “Also, working into the wind or currently allows your boat to fall back when you catch a fish, giving you a second chance to approach the spot where you caught the fish for another bite.”

Another reason boat control is important is it helps you reduce the presence of your shadow in potential fish-holding areas. “You never want to cast your shadow onto the cover before you flip it, because from the time bass are itty-bitty fry they’re conditioned to water birds and other critters so those shadows can spook them. So make sure when the sun is out that your shadow is not hitting the cover before you have a chance to flip it.”

Also monitor water clarity. Boat control in mind, if the water is a bit more clear you might want to back the boat off a bit and make pitches; if the water’s dirty, you can get closer.

“Be aware, big bass are very spooky so be as stealthy as you can. Don’t have your trolling motor on high; have it on a speed that’s conducive to the density of the cover you’re going through so you can be very thorough without being rammy while you’re moving through and you’re going to catch more big fish,” says Brauer.

No matter where you fish bass, flipping can definitely up your odds for more and bigger fish. With fish pushed deep into cover, it can also produce fish when other techniques can’t seem to get the job done. Take a few tips from legendary bass pro and flipping expert Denny Brauer and we promise you’ll become more successful on the water.